Q.249. An alpha-particle with kinetic energy Tα =7 .0 MeV is scattered elastically by an initially stationary Li6  nucleus. Find the kinetic energy of the recoil nucleus if the angle of divergence of the two particles is

Ans. Initial momentum of the a particle is

is a unit vector in the incident direction). Final momenta are respectively

is the angle between

(m & M are respectively the masses of a particle and

Since pα, pLi are both positive number (being magnitudes of vectors) we must have

This being understood, we write

Hence the recoil energy of the Li, nucleus is

As we pointed out above

Q.250. A neutron collides elastically with an initially stationary deuteron. Find the fraction of the kinetic energy lost by the neutron (a) in a head-on collision; (b) in scattering at right angles.

Ans. (a) In a head on collision

Where pd and pn are the momenta of deuteron and neutron after the collision. Squaring

or since pd = 0 in a head on collisions

Going back to energy conservation

(b) In this case neutron is scattered by 90°. Then we have from the diagram 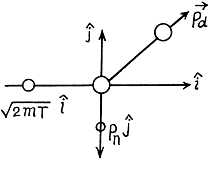 The energy lost by neutron in then

or fraction of energy lost is

6.251. Find the greatest possible angle through which a deuteron is scattered as a result of elastic collision with an initially stationary proton.

Ans. From conservation of momentum

6.252. Assuming the radius of a nucleus to be equal to

pm, where A is its mass number, evaluate the density of nuclei and the number of nucleons per unit volume of the nucleus.

Ans. This problem has a misprint Actually the radius R of a nucleus is given by

Then the number of nucleous per unit volume is

Ans.  (a) The particle x must carry two nucleons and a unit of positive charge.The reaction is

(b) The particle x must contain a proton in addition to the constituents of O17. Thus the reaction is

(c) The particle x must carry nucleon number 4 and two units of +ve charge. Thus the particle must be x = α and the reaction is

(d) The particle x must carry mass number 37 and have one unit less of positive charge.Thus x = Cl 37 and the reaction is

6.254. Demonstrate that the binding energy of a nucleus with mass number A and charge Z can be found from Eq. (6.6b).

Ans. From the basic formula

6.255. Find the binding energy of a nucleus consisting of equal numbers of protons and neutrons and having the radius one and a half times smaller than that of A127  nucleus.

Ans. The mass number of the given nucleus must be

Thus the nucleus is Be8. Then Ihe binding eneigy is

6.256. Making use of the tables of atomic masses, find: (a) the mean binding energy per one nucleon in O16  nucleus; (b) the binding energy of a neutron and an alpha-particle in a B11  nucleus; (c) the energy required for separation of an O16 nucleus into four identical particles.

Ans. (a) Total binding eneigy of Ihe O16 nucleus is

The difference in binding energy is essentially due to the coulomb repulsion between the proton and the residual nucleus Be10 which together constitute B11.

Ans.  We have for

Here Q is the energy released. Then by conservation of energy.

6.261. Assuming that the splitting of a U236  nucleus liberates the energy of 200 MeV, find: (a) the energy liberated in the fission of one kilogram of U236 isotope, and the mass of coal with calorific value of 30 kJ/g which is equivalent to that for one kg of U235; (b) the mass of U235 i sotope split during the explosion of the atomic bomb with 30 kt trotyl equivalent if the calorific value of trotyl is 4.1 kJ/g.

The mass of coal with equivalent calorific value is

(b) The required mass' is

6.262. What amount of heat is liberated during the formation of one gram of He4  from deuterium H2? What mass of coal with calorific value of 30 kJ/g is thermally equivalent to the magnitude obtained?

Ans. The reaction is (in effect).

Hence the energy released in 1 gm of He4 is

This eneigy can be derived from

Ans. The energy released in the reaction

This should be compared with the value

Ans.  The eneigy of reaction

It is given that (in the Lab frame where N14 is at rest) Tα = 4.0MeV. The momentum of incident α particle is

The momentum of outgoing proton is

The momentum of O17 is

Hence by definition of the Q of reaction

Ans. (a) The reaction is

and the energy of reaction is

(b) The reaction is

Mass of γ is taken zero. Then

6.267. Making use of the tables of atomic masses, find the velocity with which the products of the reaction B10 (n, α) Li7 come apart; the reaction proceeds via interaction of very slow neutrons with stationary boron nuclei.

Since the incident neutron is very slow and B10 is stationary, the final total momentum must also be zero. So the reaction products must emerge in opposite directions. If their speeds are, repectively, va and vLi

6.268. Protons striking a stationary lithium target activate a reaction Li7 (p, n) Be7. At what value of the proton's kinetic energy can the resulting neutron be stationary?

Ans. Q of this reaction (Li7(p, n)Be7) was calculated in problem 266 (a). If is - 1.64 MeV.We have by conservation of momentum and energy Pp = PBe (since initial Li and final neutron are both at rest)

6.269. An alpha particle with kinetic energy T = 5.3 MeV initiates a nuclear reaction Be9 (α, n) C12  with energy yield Q =+5.7 MeV. Find the kinetic energy of the neutron outgoing at right angles to the motion direction of the alpha-particle.

Ans. It is understood that Be9 is initially at rest. The moment of the outgoing neutron is

The momentum of C12 is

Then by energy conservation

6.270. Protons with kinetic energy T =1.0 MeV striking a lithium target induce a nuclear reaction p + Li7 → 2He4. Find the kinetic energy of each alpha-particle and the angle of their divergence provided their motion directions are symmetrical with respect to that of incoming protons.

Since the direction of He4 nuclei is symmetrical, their momenta must also be equal. Let T be the K.E. of each He4. Then

(pp is the momentum of proton). Also