6.271. A particle of mass m strikes a stationary nucleus of mass M and activates an endoergic reaction. Demonstrate that the threshold (minimal) kinetic energy required to initiate this reaction is defined by Eq. (6.6d).

Ans. Energy required is minimum when the reaction products all move in the direction of the incident particle with the same velocity (so that the combination is at rest in the centre of mass frame). We then have

(Total mass is constant in the nonrelativistic limit).

6.272. What kinetic energy must a proton possess to split a deuteron H2  whose binding energy is Eb = 2.2 MeV?

Ans. The result of the previous problem applies and we End that energy required to split a deuteron is

6.273. The irradiation of lithium and beryllium targets by a monoergic stream of protons reveals that the reaction Li7(p, n)Be7  -- 1.65 MeV is initiated whereas the reaction Be9(p, n)B9 —  1.85 MeV does not take place. Find the possible values of kinetic energy of the protons.

Ans. Since the reaction

is initiated, the incident proton energy must be

6.274. To activate the reaction (n, a) with stationary B11  nuclei, neutrons must have the threshold kinetic energy Tth = 4.0 MeV. Find the energy of this reaction.

6.275. Calculate the threshold kinetic energies of protons required to activate the reactions (p, n) and (p, d) with Li7  nuclei.

The threshold proton energy for initiating this reaction is

6.276. Using the tabular values of atomic masses, find the threshold kinetic energy of an alpha particle required to activate the nuclear reaction Li7 (α, n) Be9. What is the velocity of the B10 nucleus in this case?

This is because both B10 and n are at rest in the CM frame at theshold. Substituting the values of various quantities

6.277. A neutron with kinetic energy T = 10 MeV activates a nuclear reaction C12  (n, α) Be9  whose threshold is Tth = 6.17 MeV. Find the kinetic energy of the alpha-particles outgoing at right angles to the incoming neutrons' direction.

Ans. The momentum of incident neutron is

that of α particle is

By conservation of energy 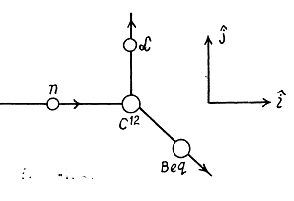 Ans.  The formula of problem 6.271 does not apply here because the photon is always reletivistic. At threshold, the energy o f the photon Ey implies a momentum

Since both n & p are at rest in CM frame at threshold, we write

by conservation of energy. Since the first term is a small correction, we have

6.279. A proton with kinetic energy T = 1.5 MeV is captured by a deuteron H2. Find the excitation energy of the formed nucleus.

In the CM frame, the kinetic energy available is (md ≈ 2 mp)

The total energy available is then

6.280. The yield of the nuclear reaction C13(d, n)N14 has maximum magnitudes at the following values of kinetic energy T1 of bombarding deuterons: 0.60, 0.90, 1.55, and 1.80 MeV. Making use of the table of atomic masses, find the corresponding energy levels of the transitional nucleus through which this reaction proceeds.

Maxima of yields deteimine the eneigy levels of N15 *. As in the previous problem the excitation eneigy is

where EK = available kinetic eneigy. This is found is as in the previous problem. The velocity of the centre of mass is

Q is the Q value for the ground state of N15 : We have

The excitation energies then are

6.281. A narrow beam of thermal neutrons is attenuated η = 360 times after passing through a cadmium plate of thickness d = 0.50 mm. Determine the effective cross-section of interaction of these neutrons with cadmium nuclei.

Ans. We have the relation

n = no. of Cd nuclei per unit volume

d = thickness of the plate

6.282. Determine how many times the intensity of a narrow beam of thermal neutrons will decrease after passing through the heavy water layer of thickness d = 5.0 cm. The effective cross-sections of interaction of deuterium and oxygen nuclei with thermal neutrons are equal to σ1 = 7.0 b and σ2  --- 4.2 b respectively.

6.283. A narrow beam of thermal neutrons passes through a plate of iron whose absorption and scattering effective cross-sections are equal to σa = 2.5b and σ8 = 11b respectively. Find the fraction of neutrons quitting the beam due to scattering if the thickness of the plate is d = 0.50 cm.

Ans. In traversing a distance d the fraction which is either scattered or absorbed is clearly

by the usual definition of the attenuation factor. Of this, the fraction scattered is (by definition of scattering and absorption cross section)

6.284. The yield of a nuclear reaction producing radionuclides may be described in two ways: either by the ratio w of the number of nuclear reactions to the number of bombarding particles, or by the quantity k, the ratio of the activity of the formed radionuclide to the number of bombarding particles, Find: (a) the half-life of the formed radionuclide, assuming w and k to be known; (b) the yield w of the reaction Li7(p, n)Be7  if after irradiation of a lithium target by a beam of protons (over t = 2.0 hours and with beam current I = 10μA) the activity of Be7 became equal to A = = 1.35.108  dis/s and its half-life to T = 53 days.

Ans. (a) Assuming of course, that each reaction produces a radio nuclide of the same type, the decay constant α of the radionuclide is k/w . Hence

(b) number of bombarding particles is

(e = charge on proton). Then the number of Be7 produced is

If λ = decay constant of

, then the activity is

For this to equal ηN0, we must have

The maximum number of Au198 is clearly

because if n is smaller,

and n increase further and if n is larger

and n will decrease. (Actually nmax is approached steadily as

6.286. A thin foil of certain stable isotope is irradiated by thermal neutrons falling normally on its surface. Due to the capture of neutrons a radionuclide with decay constant λ appears. Find the law describing accumulation of that radionuclide N (t) per unit area of the foil's surface. The neutron flux density is J, the number of nuclei per unit area of the foil's surface is n, and the effective crosssection of formation of active nuclei is α.

Ans. Rate of formation of the radionuclide is n.J.σ per unit area per-sec. Rate of decay is λN.Thus

per unit area per second

The number of radionuclide at t = 0 when the process starts is zero. So constant

6.287. A gold foil of mass m = 0.20g was irradiated during t = 6.0 hours by a thermal neutron flux falling normally on its surface. Following ζ = 12 hours after the completion of irradiation the activity of the foil became equal to A = 1.9.107 dis/s. Find the neutron flux density if the effective cross-section of formation of a radioactive nucleus is σ = 96b, and the half-life is equal to T = 2.7 days.

Ans. We apply the formula of the previous problem except that have N = no. of radio nuclide and no. of host nuclei originally.

Then after time t

T = half life of the radionuclide.

6.288. How many neutrons are there in the hundredth generation if the fission process starts with No  = 1000 neutrons and takes place in a medium with multiplication constant k = 1.05?

Ans. No. of nuclei in the first generation = No .of nuclei initially = N0

N0 in the the 3rd generation

N0 in the nth generation

6.290. In a thermal reactor the mean lifetime of one generation of thermal neutrons is ζ = 0.10 s. Assuming the multiplication constant to be equal to k = 1.010, find: (a) how many times the number of neutrons in the reactor, and consequently its power, will increase over t = 1.0 min; (b) the period T of the reactor, i.e. the time period over which its power increases e-fold.