Q.224. In the Fizeau experiment on measurement of the velocity of light the distance between the gear wheel and the mirror is l = 7.0 km, the number of teeth is z = 720. Two successive disappearances of light are observed at the following rotation velocities of the wheel: n1  = 283 rps and n2  = 313 rps. Find the velocity of light.

Ans. In the Fizean experiment, light disappears when the wheel rotates to bring a tooth in the position formerly occupied by a gap in the time taken by light to go from the wheel to the mirror and back. Thusdistance travelled = 2l Suppose the mth tooth after the gap has come in place of the latter. Then time taken

sec. in the first case

sec in the second case

Q.225. A source of light moves with velocity v relative to a receiver. Demonstrate that for v ≪ c the fractional variation of frequency of light is defined by Eq. (5.6a).

when measured along the observation line.Here

is the projection of the source velocity on the observation line. The frequency of the pulses received by the observer is

(The formula is accurate to first order only)

The frequency increases when the source is moving towards the observer.

Q.226. One of the spectral lines emitted by excited He+ ions has a wavelength λ = 410 nm. Find the Doppler shift Δλ of that line when observed at an angle θ = 30° to the beam of moving ions possessing kinetic energy T = 10 MeV

from the previous problem

Q.227. When a spectral line of wavelength λ = 0.59 [tm is observed in the directions to the opposite edges of the solar disc along its equator, there is a difference in wavelengths equal to δλ = 8.0 pm. Find the period of the Sun's revolution about its own axis.

Ans. One end of the solar disc is moving towards us while the other end is moving away from us. The angle θ between the direction in which the edges of the disc are moving and the line of observation is small

is the angular velocity of the Sun. Thus

Q.228. The Doppler effect has made it possible to discover the double stars which are so distant that their resolution by means of a telescope is impossible. The spectral lines of such stars periodically become doublets indicating that the radiation does come from two stars revolving about their centre of mass. Assuming the masses of the two stars to be equal, find the distance between them and their masses if the maximum splitting of the spectral lines is equal to (Δλ/λ)m  = 1.2.10-4  and occurs every ζ = 30 days.

Ans. Maximum splitting of die spectral lines will occur when both of the stars are moving in the direction of line of observation as shown. We then have the equations

From these we get

Q.229. A plane electromagnetic wave of frequency coo  falls normally on the surface of a mirror approaching with a relativistic velocity V. Making use of the Doppler formula, find the frequency of the reflected wave. Simplify the obtained expression for the case V << c.

Ans. We define the frame S (the lab frame) by the condition of the problem. In this frame the mirror is moving with v elocity v (along say x - ax is) towards left and light of frequency ω0 is approaching it from the left. We introduce the frame S ' whose axes are parallel to those of S but which is moving with velocity v along x axis towards left (so that the mirror is at re st in S'). In S' the frequency of the incident ligh t is

Q.230. A radar operates at a wavelength λ = 50.0 cm. Find the velocity of an approaching aircraft if the beat frequency between the transmitted signal and the signal reflected from the aircraft is equal to Δv = 1.00 kHz at the radar location.

Ans.  From the previous problem, the beat frequency is clearly

Q.231. Taking into account that the wave phase ωt — kx is an invariant, i.e. it retains its value on transition from one inertial frame to another, determine how the frequency ω and the wave number k entering the expression for the wave phase are transformed. Examine the unidimensional case.

Ans. From the invariance of phase under Lorentz transformations we get

Substituting and equating the coffiecients of t 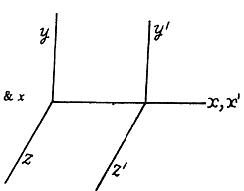 Q.232. How fast does a certain nebula recede if the hydrogen line λ = 434 nm in its spectrum is displaced by 130 nm toward longer wavelengths?

Q.233. How fast should a car move for the driver to perceive a red traffic light

as a green one

Q.234. An observer moves with velocity

along a straight line. In front of him a source of monochromatic light moves with velocity

Ans. We go to the frame in which the observer is at rest. In this frame the velocity of the source of light is, by relativistic velocity addition foumula,

Note that ω < ωo as the source is moving away from the observer (red shift).