Q.149. An excited atom has the electronic configuration 1s22s22p3d being in the state with the greatest possible total angular momentum. Find the magnetic moment of the atom in that state.

Ans. To get the greatest possible angular momentum we must have S = Smax = 1

Q.151. A certain atom is in the state in which S = 2, the total angular momentum

, and the magnetic moment is equal to zero. Write the spectral symbol of the corresponding term.

we find J = 1. From the zero value of the magnetic moment we find

Q.152. An atom in the state 2P3/2  is located in the external magnetic field of induction B = 1.0 kG. In terms of the vector model find the angular precession velocity of the total angular momentum of that atom.

associated with it; here g is the Lande factor. In a magnetic field of induction

Q.153. An atom in the state 2P1/2  is located on the axis of a loop of radius r = 5 cm carrying a current I = 10 A. The distance between the atom and the centre of the loop is equal to the radius of the latter. How great may be the maximum force that the magnetic field of that current exerts on the atom?

The force on an atom with magnetic moment

in a magnetic Geld of induction

In the present case, the maximum force arise when

is along the axis or close to it.

The magnetic field is given by

Thus the maximum force is

Q.154. A hydrogen atom in the normal state is located at a distance r = 2.5 cm from a long straight conductor carrying a current I = 10 A. Find the force acting on the atom.

Ans.The magnetic field at a distance r from a long current carrying wire is mostly tangential and given by

The force on a magnetic dipole of moment

This force is nonvanishing only when the component of

Now the maxim um value of

Thus the force is

Q.155. A narrow stream of vanadium atoms in the ground state 4F3/2  is passed through a transverse strongly inhomogeneous magnetic field of length l1 = 5.0 cm as in the Stern-Gerlach experiment. The beam splitting is observed on a screen located at a distance l2  = 15 cm from the magnet. The kinetic energy of the atoms is T = 22 MeV. At what value of the gradient of the magnetic field induction B is the distance between the extreme components of the split beam on the screen equal to δ = 2.0 mm?

Ans. In the homogeneous magnetic field the atom experinces a force

Depending on the sign of /, this can be either upward or downward. Suppose the latter is true. The atom then traverses first along a parabola inside the field and, once outside, in a straight line. The total distance between extreme lines on the screen will be

For vanadium atom in the ground state 4F3/2

using other data, and substituting

This value differs from the answer given in the book by almost a factor of 109. For neutral atoms in stem Gerlach experiments, the value T = 22MeV is much too laige. A more appropriate value will be T = 22 meV i.e. 109 times smaller. Then one gets the right answer.

Ans. (a) The term 3P 0 does not split in weak magnetic field as it has zero total angular momentum.

sublevels. The shift in each sublevel is given by

and g is the Landi factor

Thus the energy differences vanish and the level does not split.

Thus the splitting is

The term 1S0 does not split in weak magnetic field. Thus the transitions between 1P1 & 1S0 will result in 3 lines i.e. a normal Zeeman triplet.

The term 3P0 does not split. Thus the Z eeman spectrum is normal.

We see that the splitting in the two levels given by

is the same though the number of levels is different (11 and 9). It is then easy to see that only the lines with following energies occur

The Z eeman pattern is normal

Q.159. Determine the spectral symbol of an atomic singlet term if the total splitting of that term in a weak magnetic field of induction B = 3.0 kG amounts to ΔE = 104μeV

Then the total splitting is

Q.160. It is known that a spectral line λ = 612 nm of an atom is caused by a transition between singlet terms. Calculate the interval Δλ between the extreme components of that line in the magnetic field with induction B = 10.0 kG.

Ans. As the spectral line is caused by transition between singlet terms, the Z eeman effect will be normal (since g = 1 for both terms). The energy difference between extreme components of the line will be 2 μB B .This must equal

Q.161. Find the minimum magnitude of the magnetic field induction B at which a spectral instrument with resolving power λ/δλ = = 1.0.105  is capable of resolving the components of the spectral line λ = 536 nm caused by a transition between singlet terms. The observation line is at right angles to the magnetic field direction.

Ans. From the previous problem, if the components are

Hence the minimum megnetic induction is

Q.162. A spectral line caused by the transition 3D1 →  3P0 experiences the Zeeman splitting in a weak magnetic field. When observed at right angles to the magnetic field direction, the interval between the neighbouring components of the split line is Δω = 1.32.1010 s -1 Find the magnetic field induction B at the point where the source is located.

Ans. The 3P0 term does not split The 3D1 term splits into 3 lines corresponding to the shift

with Mz = ± 1, 0. The interval between neighbouring components is then given by

Now for the 3D1 term

and the energy of the 2P3/2 sublevels will be

The energy separation between D1 and D2 lines is

(this is the natural separation of the 2P them)

Q.164. Draw a diagram of permitted transitions between the terms 2P3/2 and 2S1/2 in a weak magnetic field. Find the displacements (in rad/s units) of Zeeman components of that line in a magnetic field B = 4.5 kG.

for the four sublevels

Permitted transitions must have ΔMZ = 0, ± 1

Thus only the following transitions occur

These six lines are shown below 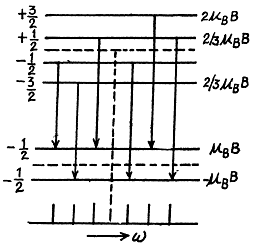 Q.165. The same spectral line undergoing  anomalous Zeeman splitting is observed in direction 1 and, after reflection from the mirror M (Fig. 6.9), in direction

In (2) the light is emitted along die direction of die field. Then the selection rules are

(a) In the transition

This has been considered above. In (1) we get all the six lines shown in the problem above

In (2) the line corresponding to

Then we get four lines

so the energies of the sublevels are

For the 3S1 line, g = 2 and the energies of the sublevels are

Ans. For the two levels

and hence the shift of the component is the value of

subject to the selection rule

For the different transition we have the following table 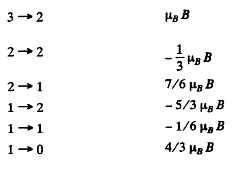 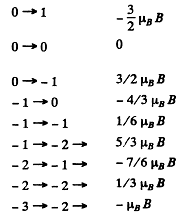 The lines farthest out are

The splitting between them is the total splitting. It is