Q.246. Using Wien's formula, demonstrate that (a) the most probable radiation frequency

(b) the maximum spectral density of thermal radiation

Ans. a ) The most probable radiation frequency

is the frequency for which

The maximum frequency is the root other than ω = 0 of this equation. It is

where x0 is the solution of the transcendental equation

(b) The maximum spectral density is the density corresponding to most probable frequency. It is

where x0 is defined above,

(c) The radiosity is

Ans.  For the first black body

Q.248. The radiosity of a black body is Me  =3.0 W/cm2. Find the wavelength corresponding to the maximum emissive capacity of that body.

Ans. From the radiosity we get the temperature of the black body. It is

Q.249. The spectral composition of solar radiation is much the same as that of a black body whose maximum emission corresponds to the wavelength 0.48μm. Find the mass lost by the Sun every second due to radiation. Evaluate the time interval during which the mass of the Sun diminishes by 1 per cent.

Ans. The black body temperature of the sun maybe taken as

Thus the radiosity is

Energy lost by sun is

This corresponds to a mass loss of

Ans. For an ideal gas p = n k T where n = number density of the particles and

i.s Boltzman constant In a fully ionized hydrogen plasma, both H ions (protons) and electrons contribute to pressure but since the mass of electrons is quite small

is the proton or hydrogen mass.

Equating this to thermal radiation pressure

Q.251. A copper ball of diameter d = 1.2 cm was placed in an evacuated vessel whose walls are kept at the absolute zero temperature. The initial temperature of the ball is To  = 300 K. Assuming the surface of the ball to be absolutely black, find how soon its temperature decreases η = 2.0 times.

Ans. In time dt after the instant t when the temperature of the ball is T, it loses

Joules of energy. As & result its temperature falls by - dT and

Where ρ = density of copper, C = its sp.heat

Q.252. There are two cavities (Fig. 5.39) with small holes of equal diameters d = 1.0 cm and perfectly reflecting outer surfaces. The

distance between the holes is l = 10 cm. A constant temperature T1 = 1700 K is maintained in cavity 1. Calculate the steady-state temperature inside cavity 2. Instruction. Take into account that a black body radiation obeys the cosine emission law.

Ans. Taking account of cosine low of emission we write for the energy radiated per second by the hole in cavity # 1 as

where A is an constant, dΩ is an element of solid angle around some direciton defined by the symbol Ω . Integrating over the whole forward hemisphere we get

We find A by equating this to the quantity

is stefan- Boltzman constant and d is the diameter of th hole.

Now energy reaching 2 from 1 is

is the solid angle subtended by the hole of 2 at 1. {We are assuming

which is the energy emitted by 2. Thus equating

Ans. (a ) The total internal eneigy of the cavity is

(b) From first law

Ans. We are given

(b) We determine the spectral distribution in wavelength.

(we have put a minus sign before dλ to subsume just this fact dλ is -ve where dω is +ve.)

Q.257. Using Planck's formula, find the power radiated by a unit area of a black body within a narrow wavelength interval Δλ = = 1.0 nm close to the maximum of spectral radiation density at a temperature T = 3000 K of the body.

Ans. We write the required power in terms of the radiosity by considering only the energy radiated in the given range. Then from the previous problem

Q.258. Fig. 5.40 shows the plot of the function y (x) representing a fraction of the total power of thermal radiation falling within 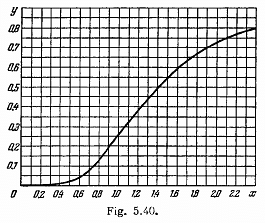 the spectral interval from 0 to x. Here

The requisite fraction is then

Q.259. Making use of Planck's formula, derive the expressions determining the number of photons per 1 cm3  of a cavity at a temperature T in the spectral intervals

Ans. We use the formula

Then the number of photons in the spectral interval (ω, ω + dω) is

Ans. (a) The mean density of the flow of photons at a distance r is

(b) If n(r) is the mean concentration (number per unit volume) of photons at a distance r form the source, then, since all photons are moving outwards with a velocity c, there is an outward flux of cn which is balanced by the flux from the source. In steady state, the two are equal and so