Q.83. A particle of mass m is located in a three-dimensional cubic potential well with absolutely impenetrable walls. The side of the cube is equal to a. Find: (a) the proper values of energy of the particle; (b) the energy difference between the third and fourth levels; (c) the energy of the sixth level and the number of states (the degree of degeneracy) corresponding to that level.

Ans. We proceed axactly as in (6.81). The wave function is chosen in the form

(The origin is at one comer of the box and the axes of coordinates are along the edges.) The boundary conditions are that

The energy eigenvalues are

and its degree of degeneracy is 6 (six).

Q.84. Using the Schrodinger equation, demonstrate that at the point where the potential energy U (x) of a particle has a finite discontinuity, the wave function remains smooth, i.e. its first derivative with respect to the coordinate is continuous.

Ans. We can for definiteness assume that the discontinuity occurs at the point x = 0. Now the schrodinger equation is

We integrate this equation around x = 0 i.e., from

are small positive numbers. Then

Since the potential and the energy E are finite and ψ(x) is bounded by assumption, the integral on the right exists and

is continuous at x = 0 (the point where U (x) has a finite jump discontinuity.) 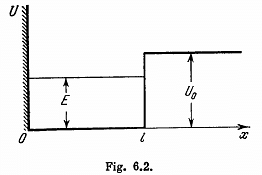 (a) the equation defining the possible values of energy of the particle in the region E < U0; reduce that equation to the form

Solving this equation by graphical means, demonstrate that the possible values of energy of the particle form a discontinuous spectrum; (b) the minimum value of the quantity l2U0 at which the first energy level appears in the region E < U0. At what minimum value of l2Uo does the nth level appear?

(a) Starting from the Schrodinger equation in the regions l & II

From this we get 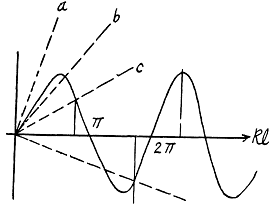 Plotting the left and right sides of this equation we can find the points at which the straight lines cross the sine curve. The roots of the equation corresponding to the eigen values of energy Ei and found from the inter section points (kl)i , for which tan (kl)i < 0 (i.e. 2nd & 4th and other even quadrants). It ii seen that bound states do not always exist. For the first bound state to appear (refer to the line (b) above)

(b) Substituting, we get

as the condition for the appearance of the first bound state. The second bound state will appear when Id is in the fourth quadrant The magnitude of the slope of the straight line must then be less than

For n bound states, it is easy to convince one self that the slope of the appropriate straight line (upper or lower) must be less than

Do not forget to note that for large n both + and - signs in the Eq. (6) contribute to solutions.

Q.86. Making use of the solution of the foregoing problem, determine the probability of the particle with energy E = U0/2 to be located in the region

It is easy to check that the condition of the boud state is satisfied. Also

Then from the previous problem

Q.87. Find the possible values of energy of a particle of mass m located in a spherically symmetrical potential well U (r) = 0 for r < ro  and U (r) =

for r = r0, in the case when the motion of the particle is described by a wave function ψ(r) depending only on r.

Ans. The Schrodinger equation is

when ψ depends on r only,

Ans. (a) The nomalized wave functions are obtained from the normalization

(b) The radial probability distribution function is

By inspection this is maximum for

The probability for the particle to be found in the region r < rpr is clearly 50 % as one can immediately see from a graph of sin2x.

Q.89. A particle of mass m is located in a spherically symmetrical potential well U (r) = 0 for r < r0  and U (r) = U0  for r > (a) By means of the substitution ψ(r) = x(r)/r find the equation defining the proper values of energy E of the particle for E < U0, when its motion is described by a wave function ψ(r) depending only on r. Reduce that equation to the form

(b) Calculate the value of the quantity

at which the first level appears.

the equation for X(r) has the from

which can be written as

The boundary condition is

These are exactly same as in the one dimensional problem in problem (6.85) Wc therefore omit further details

Q.90. The wave function of a particle of mass in in a unidimensional potential field U (x) = kx2/2 has in the ground state the form ψ(x) = Ae-αx2, where A is a normalization factor and a is a positive constant. Making use of the Schrodinger equation, find the constant a and the energy E of the particle in this state.

Ans.  The Schrodinger equation is

Substituting we find that following equation must hold

the bracket must vanish identicall. This means that the coefficient of x2 as well the term independent of x must vanish. We get

Q.91. Find the energy of an electron of a hydrogen atom in a stationary state for which the wave function takes the form ψ(r) = A (1 + ar) e-αr, where A, a, and α are constants.

Ans.  The Schrodinger equation for the problem in Gaussian units

We are given that

Equating the coefficients of r2, r, and constant term to zero we get

In the first case

This state is the ground state.

It n the second,  case

Ans. We first find A by normalization

since the integral has the value 2.

is maximum. This requires

(b) The coulomb force being given by

, the mean value o f its modulus is

Q.93. Find the mean electrostatic potential produced by an electron in the centre of a hydrogen atom if the electron is in the ground state for which the wave function is ψ(r) = Ae-r/r1, where A is a certain constant, r1 is the first Bohr radius.

Ans. We find A by normalization as above. We get

Then the electronic charge density is

due to this charge density is

so at the origin

Q.94. Particles of mass m and energy E move from the left to the potential barrier shown in Fig. 6.3. Find: (a) the reflection coefficient R of the barrier for E > U0; (b) the effective penetration depth of the particles into the region x > 0 for E < Uo, i.e. the distance from the barrier boundary to the point at which the probability of finding a particle decreases e-fold. 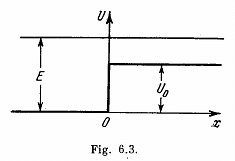 Ans. (a) We start from the Schrodinger equation

which we write as

It is convenient to look for solutions in the form

is written as unity by convention. In II we expect only a transmitted wave to the right, B = 0 then. So

The reflection coefficient is the absolute square of R :

is unchanged in form but

Inside the barrier, the particle then has a probability density equal to

of its value in

Ans. The formula is

(a) For the problem, the integral is trivial

(b) We can without loss of generality take x = 0 at the point the potential begins to climb. Then

Ans.  The potential is

The turning points are