Isomers are the compounds with the same chemical formula but different arrangement of their constituent atoms and the phenomenon is called isomerism. Isomerism in Coordination compounds is classified into two types: structural or constitutional isomerism and stereoisomerism.

Structural Isomerism : Isomers that have different bonding pattern between its atoms are called structural isomers.

(i)  Ionization Isomerism: Ionization isomers results from the exchange an anionic ligands within the coordination sphere with the counter ion outside the sphere. For example, violet [Co(NH3)5Br]SO4 and red [Co(NH3)5(SO4)]Br are ionization isomers.These isomers can be easily differentiated by qualitative test for sulphate and bromide. For example, in aqueous solution [Co(NH3)5Br]SO4 gives white ppt. of BaSO4 on reaction with BaCl2 whereas it does not give any ppt. with AgNO3. This indicates that SO42– is present as counter ion outside the coordination sphere.

On the other hand, [Co(NH3)5(SO4)]Br gives light yellow ppt. of AgBr with AgNO3 and it does not give any ppt. with BaCl2. This indicates that Br- is present outside the coordination sphere.

These isomers can also be differentiated by IR spectroscopy. Some other examples of ionization isomerism are:

(ii) Hydration Isomerism: When there is exchange between the water molecules in coordination sphere and the water of hydration, then the resulting isomers are called hydrate isomers. For example, hydrate isomers of the compound having formula CrCl3.6H2O are:[Cr(H2O)6]Cl3 (violet)[Cr(H2O)5Cl](H2O)Cl2 (pale green)[Cr(H2O)4Cl2](2H2O)Cl (dark green)

b. The complexes can be distinguished by precipitation of the free chloride ion using aqueous silver nitrate. For example, when these isomers react with AgNO3 solution, the y give white ppt. of AgCl corresponding to One, two and three mole of chloride ion respectively.

c. On treating these complexes with conc. H2SO4 the water of hydration is lost.

(iii) Linkage Isomerism: Linkage isomers may arise when one or more of the ligands can coordinate to the metal ion in more than one way (ambidentate ligand), e.g. in [SCN]-, both the N and S atoms are potential donor sites.

Other examples of linkage isomers are:

(iv)  Coordination Isomerism: Coordination isomers are possible only for salts in which both cation and anion are complex ions. These isomers arise from interchange of ligands between the two metal centres. For example,

(vi) Ligand Isomerism: This isomerism takes place in complexes in which ligand itself exists in two or more isomeric form. For Example,

are isomers that differ only in spatial arrangement of ligands coordinated to metal cation/atom.These are of two types:

Square Planar Complexes: These are of different types depending upon the nature and type of ligands. Complexes can be either ionic of neutral. The charge does not effect on their property of exhibiting geometrical isomers. For convenience, we will take neutral complexes.

Another example is that having bidentate ligands with two methyl substituents as shown below:

Octahedral Complexes: In an octahedral complex a metal cation will present in the centre of an octahedron and the six ligands occupy the six corners numbered from 1 to 6 as shown below: 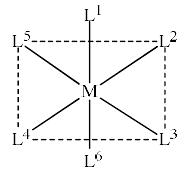 [Ma6]n±, [Ma5b]n± and [M(AA)3]n± (where AA is a symmetric bidentate ligand) complexes will not have geometrical isomers because all the corners of regular tetrahedron are equivalent. 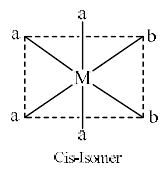 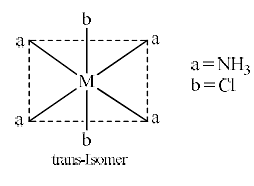 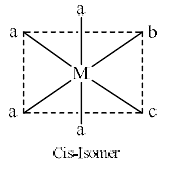 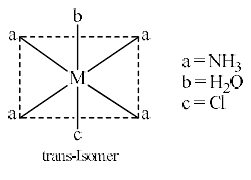