There are four types of complexes which exist in fac- or mer-isomeric forms.

(ii) [M(AB)3]n±: In this type of complexes AB is unsymmetric bidentate ligand.For example: [Co(gly)3] and [Cr(gly)3]. The facial and meridional isomers of [Co(gly)3] are shown below: 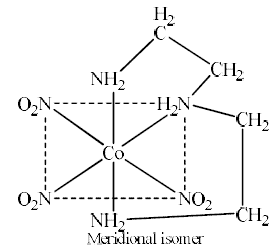 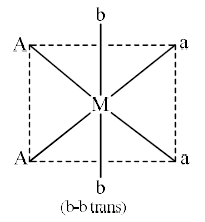 Three geometrical isomers are possible for this complex.

Octahedral ComplexesOctahedral complexes of [Ma6]n±, [Ma5b]n± are optically inactive and do not show optical isomerismbecause of the presence of plane of symmetry.

For octahedral complexes which exist as cis and trans isomers, see the optical activity in both theisomers individually.