The document January 2021: Current Affairs Environment & Ecology- 2 UPSC Notes | EduRev is a part of the UPSC Course Current Affairs & Hindu Analysis: Daily, Weekly & Monthly.
All you need of UPSC at this link: UPSC

A tigress was found dead in the Kanha tiger reserve buffer zone in Madhya Pradesh.

➤ Location: It stretches over 940 square km in the two districts - Mandla and Balaghat - of Madhya Pradesh.

➤ History: The present-day Kanha area was divided into two sanctuaries, Hallon and Banjar. Kanha National Park was created in 1955, and in 1973 was made the Kanha Tiger Reserve.

➤ Other Tiger Reserves in Madhya Pradesh: 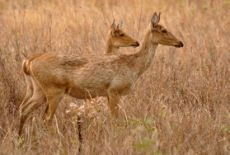 Subspecies: There are three subspecies of swamp deer found in the Indian Subcontinent.

Recently, India drafted a new Arctic policy that aims at expanding scientific research, sustainable tourism and exploration of mineral oil and gas in the Arctic region.

➤ Ecological Impact of Warming on the Arctic:

➤ Conflict over the Arctic:

➤ India's Interests in the Arctic:

Recently, the United Nations Environment Programme (UNEP) Adaptation Gap Report 2020 estimated the annual cost of adaptation to the effects of climate change for developing countries to at least quadruple by 2050.

➤ Global Adaptation for Climate Change: Three- quarters of all the countries have adopted at least one climate change adaptation planning instrument and

most developing countries are working on national adaptation plans.

➤ Some of the Indian Initiatives to Fight Climate Change:

➤ Other Bird Sanctuaries of Bihar: