The document Joint Probability Distributions Mathematics Notes | EduRev is a part of the Mathematics Course Additional Topics for IIT JAM Mathematics.
All you need of Mathematics at this link: Mathematics

As we saw in the section on probability concepts, these two variables can be either independent or dependent.If X and Y are Independent:

In the example we gave above, flipping a coin and tossing a die are independent random variables, the outcome from one event does not in any way affect the outcome in the other events. Assuming that the coin and die were both fair, the probabilities given by a through l can be obtained by multiplying the probabilities of the different x and y combinations.For example: P(X = 2, Y = Tails) is given by

If X and Y are Dependent:If X and Y are dependent variables, their joint probabilities are calculated using their different relationships as in the example below.Given a bag containing 3 black balls, 2 blue balls and 3 green balls, a random sample of 4 balls is selected. Given that X is the number of black balls and Y is the number of blue balls, find the joint probability distribution of X and Y.Solution:The random variables X and Y are dependent since they are picked from the same sample space such that if any one of them is picked, the probability of picking the other is affected. So we solve this problem by using combinations.We've been told that there are 4 possible outcomes of X i.e {0,1,2,3} where by you can pick none, one, two or three black balls; and similarly for Y there are 3 possible outcomes {0,1,2} i.e. none, one or two blue balls.The joint probability distribution is given by the table below:

What the above represents are the different number of ways we can pick each of the required balls. We substitute for the different values of x (0,1,2,3) and y (0,1,2) and solve i.e.

f(0,0) is a special case. We don't calculate this and we outright claim that the probability of obtaining zero black balls and zero blue balls is zero. This is because of the size of the entire population relative to the sample space. We need 4 balls from a bag of 8 balls, in order not to pick black nor blue balls, we would need there to be at least 4 green balls. But we only have 3 green balls so we know that as a rule we must have at least either one black or blue ball in the sample. 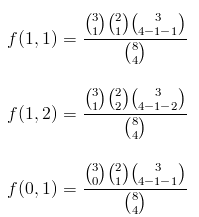 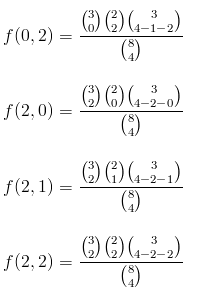 f(3,2) doesn't exist since we only need 4 balls.From the above, we obtain the joint probability distribution as: 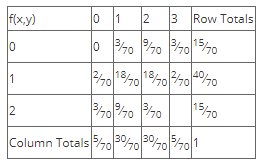 The marginal probability density functions are given by

Example:A certain farm produces two kinds of eggs on any given day; organic and non-organic. Let these two kinds of eggs be represented by the random variables X and Y respectively. Given that the joint probability density function of these variables is given by 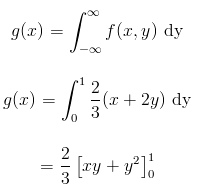 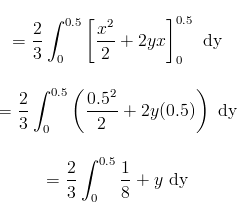 where by X is a continuous random variable and Y is a discrete random variable, g(x) is the marginal pdf of X.The cumulative distribution function is given by

The conditional probability distribution for a discrete set of random variables can be found from:

where the above is the probability that X lies between a and b given that Y = y.For a set of continuous random variables, the above probability is given as: