The document Kinematics (Part - 2) - Mechanics, Irodov JEE Notes | EduRev is a part of the JEE Course Physics For JEE.
All you need of JEE at this link: JEE

Q. 16. Two particles, 1 and 2, move with constant velocities v1 and v2  along two mutually perpendicular straight lines toward the intersection point 0. At the moment t = 0 the particles were located at the distances l1 a nd l2 from the point 0. How soon will the distance between the particles become the smallest? What is it equal to? 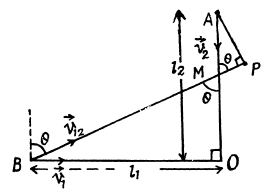 The sought time can be obtained directly from the condition that

is minimum. This gives

Q. 17. From point A located on a highway (Fig. 1.2) one has to get by car as soon as possible to point B located in the field at a distance 1 from the highway. It is known that the car moves in the field ri times slower than on the highway. At what distance from point D one must turn off the highway?

Ans. Let the car turn off the highway at a distance x from the point D.So, CD = x, and if the speed of the car in the field is v, then the time taken by the car to cover the distance AC = AD - x on the highway

So, the total time elapsed to move the car from point A to B

For t to be minimum Q. 18. A point travels along the x axis with a velocity whose projection vx  is presented as a function of time by the plot in Fig. 1.3.

Assuming the coordinate of the point x = 0 at the moment t = 0, draw the approximate time dependence plots for the acceleration wx, the x coordinate, and the distance covered s.

On the basis of these obtained expressions wx (r), x (;t) and s (t) plots can be easily plotted as shown in the figure of answersheet

Q. 19. A point traversed half a circle of radius R = 160 cm during time interval τ = 10.0 s. Calculate the following quantities averaged over that time:

(b) Modulus of mean velocity vector

(c) Let the point moves from i to /along the half circle (Fig.) and v0 and v be the spe at the points respectively.

(as wt is constant, according to the problem)

Now the modulus of the mean vector of total acceleration

Q.20. A radius vector of a particle varies with time t as r = at (1 — αt), where a is a constant vector and α is a positive factor. Find: (a) the velocity v and the acceleration w of the particle as functions of time; (b) the time interval Δt taken by the particle to return to the initial points, and the distance s covered during that time.

(b)  From the equation

So, the sought time

s directed towards the +ve x-axis

Hence x coordinate of the particle at t = 6 s.

As t cannot be negative, so,

Hence the particle is at a distance of 10 cm from the origin at three moments of time :

On integrating and simplifying, we get s = 34 cm.

Q.22. The velocity of a particle moving in the positive direction of the x axis varies a

here α is a positive constant. Assuming that at the moment t = 0 the particle was located at the point x = 0, find: (a) the time dependence of the velocity and the acceleration of the particle; (b) the mean velocity of the particle averaged over the time that the particle takes to cover the first s metres of the path.

Ans. As particle is in unidirectional motion it is directed along the jc-axis all the time. As at t = 0, x = 0

The mean velocity of particle

Q.23. A point moves rectilinearly with deceleration whose modulus depends on the velocity v of the particle as

where a is a positive constant. At the initial moment the velocity of the point is equal to v0. 'What distance will it traverse before it stops? What time will it take to cover that distance?

On integrating w e get

Again according to the problem

Q.24. A radius vector of a point A relative to the origin varies with time t as r = ati — bt2j, where a and b are positive constants, and i and j are the unit vectors of the x and y axes. Find: (a) the equation of the point's trajectory y (x); plot this function; (b) the time dependence of the velocity v and acceleration w vectors, as well as of the moduli of these quantities; (c) the time dependence of the angle α between the vectors w and v; (d) the mean velocity vector averaged over the first t seconds of motion, and the modulus of this vector

which is Eq. of a parabola, whose graph is shown in the Fig.

Q.25. A point moves in the plane xy according to the law x = at, y = at (1. — αt), where a and a are positive constants, and t is time. Find: (a) the equation of the point's trajectory y (x); plot this function; (b) the velocity v and the acceleration w of the point as functions of time; (c) the moment t0 at which the velocity vector forms an angle π/4 with the acceleration vector.

Q.26.  A point moves in the plane xy according to the law x = a sin cot, y = a (1 — cos ωt), where a and co are positive constants. Find: (a) the distance s traversed by the point during the time T; (b) the angle between the point's velocity and acceleration vectors.

Differentiating Eq. (1) with respect to time

(b) Taking inner product of

the angle between velocity vector and acceleration vector equals

Q.27. A particle moves in the plane xy with constant acceleration w directed along the negative y axis. The equation of motion of the particle has the form y = ax — bx2, where a and b are positive constants. Find the velocity of the particle at the origin of coordinates.

Ans. Accordiing to the problem

Again differentiating with respect to time

Hence, the velocity of the particle at the origin

Q.28. A small body is thrown at an angle to the horizontal with the initial velocity v0. Neglecting the air drag, find: (a) the displacement of the body as a function of time r (t); (b) the mean velocity vector (v) averaged over the first t seconds and over the total time of motion.

Ans. As the body is under gravity of constant accelration

over the first t seconds

over the first t seconds 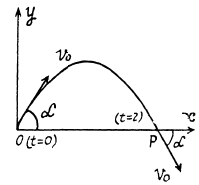 Hence using this propety in Eq. (5)

Putting this value of τ in Eq. (4), the average velocity over the time of flight

Q.29.  A body is thrown from the surface of the Earth at an angle α to the horizontal with the initial velocity v0. Assuming the air drag to be negligible, find: (a) the time of motion; (b) the maximum height of ascent and the horizontal range; at what value of the angle α they will be equal to each other; (c) the equation of trajectory y (x), where y and x are displacements of the body along the vertical and the horizontal respectively; (d) the curvature radii of trajectory at its initial point and at its peak.

Ans. The body thrown in air with velocity v0 at an angle a from the horizontal lands at point P on the Earth's surface at same horizontal level (Fig.). The point of projection is taken as origin, so, Δx = x and Δy = y 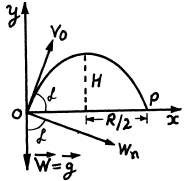 During the time of motion the net horizontal displacement or horizontal range, will be obtained by the equation

Which is the sought equation of trajectory i.e. y (x)

(d) As the body thrown in air follows a curve, it has some normal acceleration at all the moments of time during it’s motion in air.At the initial point (x = 0, y = 0), from the equation :

At the peak point

and the angential acceleration is zero.

Now from the Eq.

Note : We may use the formula of curvature radius of a trajectory y (x), to solve part (d)y

Q. 30.  Using the conditions of the foregoing problem, draw the approximate time dependence of moduli of the normal wn  and tangent wτ, acceleration vectors, as well as of the projection of the total acceleration vector wv on the velocity vector direction.

all the moments of time.