The document Kinematics (Part - 4) - Mechanics, Irodov JEE Notes | EduRev is a part of the Class 11 Course Physics For JEE.
All you need of Class 11 at this link: Class 11

(a) Defferentiating φ (t) with respect to time.

From (1) the solid comes to stop at

for all values of t.

Q. 47. A solid body starts rotating about a stationary axis with an angular acceleration β = at, where a = 2.0.10-2  rad/s3. How soon after the beginning of rotation will the total acceleration vector of an arbitrary point of the body form an angle α = 60° with its velocity vector?

Ans. Angle a is related with |wt| and wn by means of the fomula :

where R is die radius of die circle which an arbitrary point of the body circumscribes. From die given equation

is positive for all values of t)

Integrating within the limit

Q. 48. A solid body rotates with deceleration about a stationary axis with an angular deceleration

Ans. In accordance with the problem, βz < 0

where A: is proportionality constant

Integratin this Eq. within its limit for (φ) f

or by differentiating Eq. (1)

Q.50. A solid body starts rotating about a stationary axis with an angular acceleration β = β0  cos φ, where β0  is a constant vector and φ is an angle of rotation from the initial position. Find the angular velocity of the body as a function of the angle φ. Draw the plot of this dependence.

Ans. Let us choose the positive direction of z-axis (stationary rotation axis) along the vector

In accordance with the equation

Integrating this Eq. within its limit for 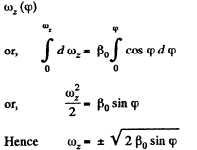 is shown in the Fig. It can be seen that as the angle qp grows, the vector

increases, coinciding with the direction of the vector

reaches the maximum at

then starts decreasing and finally turns into zero at φ = π. After that the body starts rotating in the opposite direction in a similar fashion (ωz < 0). As a result, the body will oscillate about the position

with an amplitude equal to π/2.

Ans.  Rotating disc moves along the x-axis, in plane motion in x - y plane. Plane motion of a solid can be imagined to be in pure rotation about a point (say 7) at a certain instant known as instantaneous centre of rotation. The instantaneous axis whose positive sense is directed along

the solid and which passes through the point/, is known as instantaneous axis of rotation.

Therefore the velocity vector of an aibitrary point (P) of the solid can be represented as :

plane, so to satisy the

Hence point  l is at a distance

above the centre of the disc along y - axis. Using all these facts in Eq. (2), we get

(a) From the angular kinematical equation

(b) As centre C moves with constant acceleration w, with zero initial velocity

Q. 52.  A point A is located on the rim of a wheel of radius R = 0.50 m which rolls without slipping along a horizontal surface with velocity v = 1.00 m/s. Find: (a) the modulus and the direction of the acceleration vector of the point A; (b) the total distance s traversed by the point A between the two successive moments at which it touches the surface.

Ans. The plane motion of a solid can be imagined as the combination of translation of the C.M . and rotation about C.M.

is the position o f vector o f A with respect to C.

constant, and the rolling is without slipping

Using these conditions in Eq. (2)

is the unit vector directed along

or directed toward the centre of the wheel.

(b) Let the centre o f the wheel m ove toward right (positive jc-axis) then for pure tolling on the rigid horizontal surface, wheel will have to rotate in clockwise sense. If co be the angular velocity o f the wheel then

Let the point A touches the horizontal surface at t = 0, further let us locate the point A at t = ty

When it makes θ = ω t at the centre of the wheel.

H ence distance covered b y the point A during

Ans. Let us fix the co-ordinate axis xyz as shown in the fig. As the ball rolls without slipping along the rigid surface so, on the basis o f the solution o f problem Q.52 :

At the position corresponding to that of Fig., in accordance with the problem, 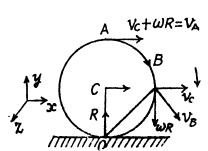 (a) Let us fix the co-ordinate system with the frame attached with the rigid surface as shown in the Fig.

As point O is the instantaneous centre of rotation of the ball at the moment shown in Fig. Q. 54. A cylinder rolls without slipping over a horizontal plane. The radius of the cylinder is equal to r. Find the curvature radii of trajectories traced out by the points A and B (see Fig. 1.7).

Ans. Let us draw the kinematical diagram of the rolling cylinder on the basis of the solutioi of problem Q.53. As, an arbitrary point of the cylinder follows a curve, its normal acceleration and radius of curvature are related by the well known equation

Similarly for point B,

as fo r relative lin ear velocity. The relative acceleration of 1 w.r.t  2 is

where S ' is a fram e corotating with the second body and S is a space fixed frame with origin coinciding with the point of intersection of the two axes,

Since S ' rotates with angular velocity

as the first b ody rotates with constant angular velocity in space, thus

Note that for any vector

Q. 57.  A round cone with half-angle α = 30° and the radius of the base R = 5.0 cm rolls uniformly and without slipping over a horizontal plane as shown in Fig. 1.8. The cone apex is hinged at the point O which is on the same level with the point C, the cone base centre. The velocity of point C is v = 10.0 cm/s. Find the moduli of  (a) the vector of the angular velocity of the cone and the angle it forms with the vertical; (b) the vector of the angular acceleration of the cone.

Then the resultant angular velocity of the cone.

As the rolling is pure the magnitudes of the vectors

can be easily found from Fig. 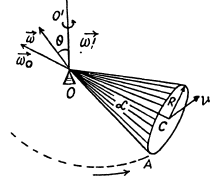 (b) Vector of angular acceleration

which rotates about the OO' axis with the angular velocity

retains i magnitude. This increment in the time interval dt is equal to

The magnitude of the vector

Using the facts of the solution of 1.57, the angular velocity of the body

And the angular acceleration.