A body is said to possess energy if it has the capacity to do work. When a body possessing energy does some work, part of its energy is used up. Conversely if some work is done upon an object, the object will be given some energy. Energy and work are mutually convertiable.

There are various forms of energy. Heat, electricity, light, sound and chemical energy are all familiar forms. In studying mechanics, we are however concerned chiefly with mechanical energy. This type of energy is a property of movement or position.

Kinetic energy (K.E.), is the capacity of a body to do work by virtue of its motion.

If a body of mass m has velocity v its kinetic energy is equivalent to the work, which an external force would have to do to bring the body from rest up to its velocity v.

Now relation between Potential energy and work done is

where DU is change in potential energy

There are two common forms of potential energy, gravitational and elastic.

1. Potential energy is a straight function (defined only for position)

2. Potential energy of a point depends on a reference point

3. Potential energy difference between two position doesn't depend on the frame of reference.

5. If we define Potential energy for non conservative force then we have to define P.E. of a single point through different path which gives different value of P.E. at single point that doesn't make any sense.

It is possessed by virtue of height.

The gravitational potential energy is equivalent to the negative of the amount of work done by the weight of the body in causing the descent. 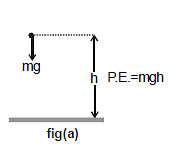 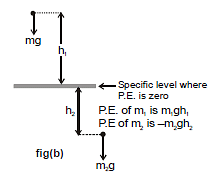 9.2.2 (b) Elastic Potential Energy : It is a property of stretched or compressed springs.

The end of a stretched elastic spring will begin to move if it is released. The spring. therefore possesses potential energy due to its elasticity. (i.e., due to change in its configuration)

The amount of elastic potential energy stored in a spring of natural length a and spring constant k when it is extended by a length x (from the natural length) is equivalent to the amount of work necessary to produce the extension.

It is never negative whether the spring is extended or compressed.

Consider a spring block system as shown in the figure and let us calculate work done by spring when the block is displaceed by x0 from the natural length.

At any moment if the elongation in spring is x, then the force on the block by the spring is kx towards left. Therefore, the work done by the spring when block further displaces by dx

Similarly, work done by the spring when it is given a compression x0 is -

So, having reversed the sign of the partial derivatives of the function U with respect to x, y, z, we obtain the projection Fx, Fy and Fz of the vector F on the unit vectors i, j and k. Hence, one can readily find the vector itself :

The quantity in parentheses is referred to as the scalar gradient of the function U and is denoted by grad U or U. We shall use the second, more convenient, designation where ("nabla") signifies the symbolic vector or operator

A graph plotted between the PE of a particle and its displacement from the center of force field is called PE curve.

Using graph, we can predict the rate of motion of a particle at various positions.

Force on the particle is F(x) =

Case : I On increasing x, if U increases, force is in (-) ve x direction i.e. attraction force.

Case : II On increasing x, if U decreases, force is in ( + ) ve x-direction i.e. repulsion force.

Different positions of a particle :

If net force acting on a body is zero, it is said to be in equilibrium. For equilibrium

= 0. Points P, Q, R and S are the states of equilibrium positions.

When a particle is displaced slightly from a position and a force acting on it brings it back to the             initial position, it is said to be in stable equilibrium position.

When a particle is displaced slightly from a position and force acting on it tries to displace the particle further away from the equilibrium position, it is said to be in unstable equilibrium.

In figure S is the neutral point

Ex.12 The potential energy between two atoms in a molecule is given by, U(x) =

, where a and b are positive constants and x is the distance between the atoms. The system is in stable equilibrium when -

Ex.13 The potential energy of a conservative system is given by U = ax2 - bx where a and b are positive constants. Find the equilibrium position and discuss whether the equilibrium is stable, unstable or neutral.

From the given equation we can see that

is the stable equilibrium position,

The document Kinetic Energy, Potential Energy & P.E. of a Spring Notes | Study Physics For JEE - JEE is a part of the JEE Course Physics For JEE.
All you need of JEE at this link: JEE
Join Course