Class 9 : Kinetic Energy and the Law of Conservation of Energy Class 9 Notes | EduRev

The document Kinetic Energy and the Law of Conservation of Energy Class 9 Notes | EduRev is a part of the Class 9 Course Science Class 9.
All you need of Class 9 at this link: Class 9

KINETIC ENERGYA moving object is capable of doing work because of it" motion. Hence, we say that the object has kinetic energy. "Kinetikos" in Greek means "to move". Hence,kinetic energy means energy due to motion. The energy is stored in the object when work is done to change its velocity from a lower value to a higher value, or from rest to certain velocity.

Kinetic energy of an object is defined as the energy which it possesses by virtue of its motion, and is measured by the amount of work that the object can do against an opposing force before it comes to rest.

Kinetic energy of an object moving with a certain velocity is equal to the work done on it to enable it to acquire that velocity.

1. A ball rolling on a surface because it can set another ball into motion by striking it.

2. A bullet fired from a gun as it is able to penetrate some distance into a target which it strikes.

3. A tarpedo in motion as it can do work by penetrating into the side' of a ship.

4. Water in motion as it can turn a wheel or a turbine.

5. A fast wind as it can set a boat in motion when striking against its sail.

6. A moving hammer as it drives a nail into a wall against the resistance offered to it by the wall.

7. A falling body as it can break something on which it falls.

Consider an object of mass m which is moving with an initial velocity u on a perfectly frictionless surface. Let a constant external force F act on it and produce an acceleration a in it. If v is the final velocity of the object after having undergone a displacements, then from

Work done by the force in displacing the body through s, i.e.,

We know from Newton's Second Law of Motion,

This work done (W) in making the object acquire a velocity v after starting from rest has not gone waste and is, in fact, stored in the object.

Work stored up in a moving object is called the kinetic energy of the object.

If kinetic energy of an object is denoted by Ek then

Kinetic energy of a moving object is defined as half the product of the mass of the object and the square of the speed of the object. 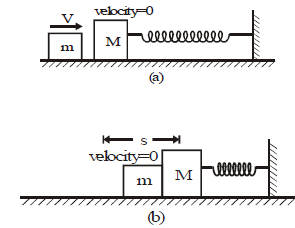 The kinetic energy of mass m converts into elastic potential energy of spring.Let us take an example :- Let a small mass m be released from a smooth inclined plane. Another mass M is kept at a rough horizontal plane at rest. The mass m will move along the inclined plane and strike the mass M. Both the masses will move along the horizontal surface for some distance and come to rest. The mass M moves a distance s by the force applied by m. Thus, m does work for which it requires energy. This energy is possessed by m at A as it was at a height h from the horizontal surface. This energy due to position is called potential energy. Precisely speaking this energy is called gravitational potential energy.

The energy possessed by a body due to its position or change in shape is called potential energy.

Other examples where elastic potential energy is stored are :(i) a stretched bow(ii) a stretched rubber band(iii) a wound springAll above examples are because of change in shape.

This work is converted into potential energy (P.E.) of the block. 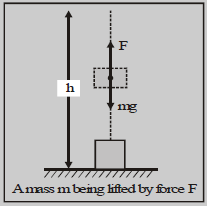 CONSERVATION OF MECHANICAL ENERGYLet us consider two cases where mechanical energy is conserved.

Case : A ball is dropped from some height. 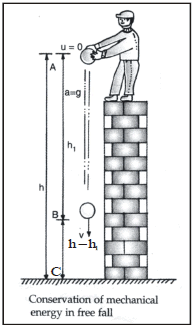 At point A: Let a ball of mass m is dropped from a height h. Here the total energy (T.E.) of the ball is the sum of kinetic energy (K.E.) and potential energy (P.E.).

At point C : Suppose the ball cover a distance h when it moves from A to C. Let V be the velocity of the ball at point C just before it thouches the ground, then 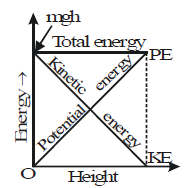