Q1. Three blocks of mass 1 kg, 4 kg and 2 kg are placed on a smooth horizontal plane as shown in figure. Find: (a) the acceleration of the system, (b) the normal force between 1 kg block and 4 kg block, (c) the net force on 2 kg block.

Q2. Two blocks of mass 2 kg and 4 kg are released from rest over a smooth inclined plane of inclination 30° as shown in figure. What is the normal force between the two blocks?

Q3. What should be the acceleration ‘a’ of the box shown in figure so that the block of mass m exerts a force mg/4 on the floor of the box?

∴ N = mg/4As lift is moving downward with acceleration a , the pseudo force on A will be ma acting in the upward direction. For the block to be at rest w.r.t. lift.N + ma = mgor

Q4. A plumb bob of mass 1 kg is hung from the ceiling of a train compartment. The train moves on an inclined plane with constant velocity. If the angle of incline is 30°. Find the angle made by the string with the normal to the ceiling. Also, find the tension in the string, (g = 10 m/s2)

Ans: 30°, IONSol: Angle made by the string with the normal to the ceiling = θ = 30°As the train is moving with constant velocity no pseudo force will act on the plumb-bob. 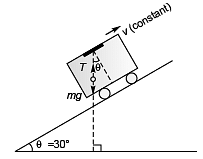 Q5. Repeat both parts of the above question, if the train moves with an acceleration a = g/2 up the plane.

Sol: Pseudo force (= ma) on plumb-bob will be as shown in figure

Q6. Two blocks of mass 1 kg and 2 kg are connected by a string AS of mass 1 kg. The blocks are placed on a smooth horizontal surface. Block of mass 1 kg is pulled by a horizontal force F of magnitude 8 N. Find the tension in the string at points A and B.

Q1. In the arrangement shown in figure what should be the mass of block A, so that the system remains at rest? Neglect friction and mass of strings. 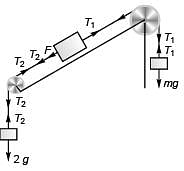 Q2. In the arrangement shown in figure, find the ratio of tensions in the strings attached with 4 kg block and that with 1 kg block.

Ans: 4Sol: As net downward force on the system is zero, the system will be in equilibrium

Q3. Two unequal masses of 1 kg and 2 kg are connected by a string going over a clamped light smooth pulley as shown in figure. The system is released from rest. The larger mass is stopped for a moment 1.0 s after the system is set in motion. Find the time elapsed before the string is tight again.

On stopping 2 kg, the block of 1kg will go upwards with retardation g. Time ( t' ) taken by the 1 k g block to attain zero velocity will be given by the equation.

If the 2 kg block is stopped just for a moment (time being much-much less than 1/3 s), it will also start falling down when the stopping time ends.In

As the two are just equal, the string will again become taut after time 1/3 s.

Q4. Two unequal masses of 1 kg and 2 kg are connected by an inextensible light string passing over a smooth pulley as shown in figure. A force F = 20 N is applied on 1 kg block. Find the acceleration of either block. (g = 10 m/s2).

Q1. Consider the situation shown in figure. Both the pulleys and the string are light and all the surfaces are smooth.(a) Find the acceleration of 1 kg block.(b) Find the tension in the string.(g = 10 m/s 2).

Tension in the string

Q2. Calculate the acceleration of either blocks and tension in the string shown in figure. The pulley and the string are light and all surfaces are smooth.

Q3. Find the mass M so that it remains at rest in the adjoining figure. Both the pulley and string are light and friction is absent everywhere, (g = 10 m/s 2).

Ques 1: In figure m1 = 1 kg and m2 = 4 kg. Find the mass M o f the hanging block which will prevent the smaller block from slipping over the triangular block. All the surfaces are friction less and the strings and the pulleys are light

Ans: 6 .83 kgSol: Block on triangular block will not slip if 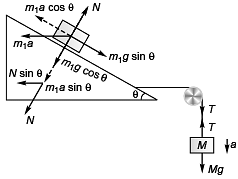 Displacement of block at time t relative to car would be

Velocity of block at time t (relative to car) will be 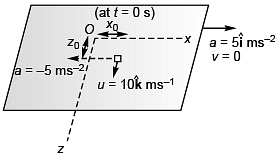 Thus, velocity of object at any time t (relative to car)

The object will stop moving relative to car when10 - 8t = 0 i.e., t = 1.25s∴ vx = 10 - 8t for  0<t<1.25 sQues 5: A block is placed on an inclined plane as shown in figure. What must be the frictional force between block and incline if the block is not to slide along the incline when the incline is accelerating to the right at

Ans: 9/25 mgSol: For block not to slide the frictional force ( f ) would be given by

The document DC Pandey Solutions: Laws of Motion - 2 - Notes | Study Physics Class 11 - NEET is a part of the NEET Course Physics Class 11.
All you need of NEET at this link: NEET
Attempt Now
Join Course