The document Legendre Special Function (Part - 8)- Mathematical Methods of Physics, UGC - NET Physics Physics Notes | EduRev is a part of the Physics Course Physics for IIT JAM, UGC - NET, CSIR NET.
All you need of Physics at this link: Physics

Qn(x ) Functions of the Second Kind

It will be noticed that we have used only pn for n even and qn for n odd (because they terminated for this choice of n). We may now deﬁne a second solution of Legendre’s equation (Fig. 12.17) by 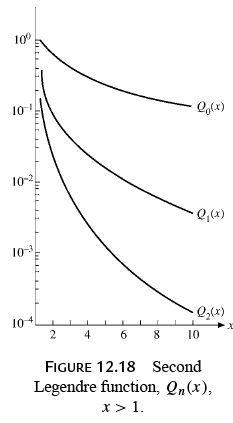 Frequently, a closed form of the second solution, Qn (z), is desirable. This may be obtained by the method discussed in Section 9.6. We write

in which the constant An replaces the evaluation of the integral at the arbitrary lower limit.Both constants, An and Bn , may be determined for special cases.

the last expression following from a Maclaurin expansion of the logarithm. Comparing this with the series solution (Eq. (12.210)), we obtain

Repeated application of the recurrence formula leads to

When using the latter form, valid for large z, we take the line interval −1 ≤ x ≤ 1 as a cut line. Values of Qn (x ) on the cut line are customarily assigned by the relation

and so on.For convenient reference some special values of Qn (z) are given.

Maxwell’s equations for the vacuum, where the external current and charge densities vanish, lead to the wave (or vector Helmholtz) equation for the vector potential A. In a partial wave expansion of A in spherical polar coordinates we want to use angular eigenfunctions that are vectors. To this end we write the coordinate unit vectors

It is obvious that they obey the orthogonality relations

Given J , the selection rules of angular momentum coupling tell us that L can only take on the values J + 1,J , and J − 1. If we look up the Clebsch–Gordan coefﬁcients and invert Eq. (12.228) we get

displaying the vector character of the Y and the orbital angular momentum contents, L + 1 and L − 1,

If we substitute Eq. (12.230) into the radial component rˆ ∂/∂ r of the gradient operator, for example, we obtain both dF /dr terms in Eq. (12.233). For a complete derivation of Eqs. (12.233) to (12.239) . These relations play an important role in the partial wave expansion of classical and quantum electrodynamics.The deﬁnitions of the vector spherical harmonics given here are dictated by convenience, primarily in quantum mechanical calculations, in which the angular momentum is a signiﬁcant parameter.