The document Linear Ordinary Differential Equations of First and Second Order (Part - 1), UGC - NET Physics Physics Notes | EduRev is a part of the Physics Course Physics for IIT JAM, UGC - NET, CSIR NET.
All you need of Physics at this link: Physics

We consider the equation

So we will study the equation

We introduce the method of integrating factors (due to Leibniz): We multiply equation (A) by a function µ(t) on both sides

The function µ is chosen such that the equation is integrable, meaning the LHS (Left Hand Side) is the derivative of something. In particular, we require:

which gives a formula to compute µ

Therefore, this µ is called the integrating factor.Note that µ is not unique. In fact, adding an integration constant, we will get a diﬀerent µ. But we don’t need to be bothered, since any such µ will work. We can simply choose one that is convenient.

Putting back into equation (A), we get

which give the formula for the solution

where c is an arbitrary constant. Pay attention to where one adds this integration constant!

Answer.First, let’s rewrite the equation into the normal form

with y(0) = a, and discussion the behavior of y as t → ∞, as one chooses diﬀerent initial value a. Answer.Let’s solve it ﬁrst. We have

Plug in the IC to ﬁnd c

To see the behavior of the solution, we see that it contains two terms. The ﬁrst term e−t goes to 0 as t grows. The second term et/3 goes to ∞ as t grows, but the constant 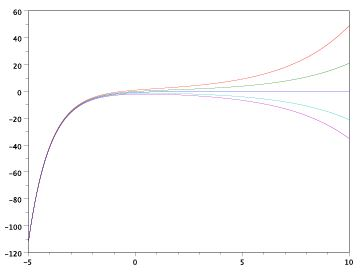 we get the solution:

Note the condition t > 0 comes from the fact that the initial condition is given at t = 1, and we require t ≠ 0.In the graph below we plot several solutions in the t − y plan, depending on initial data.The one for our solution is plotted with dashed line where the initial point is marked with a‘×’. 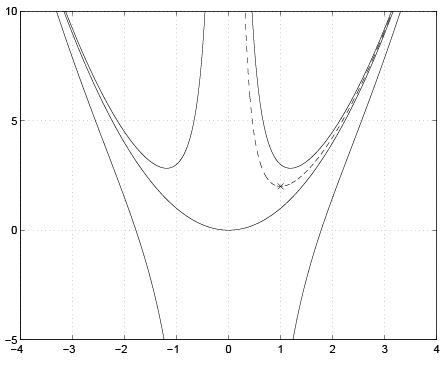 We study ﬁrst order equations that can be written as

where M (x) and N (y) are suitable functions of x and y only. Then we have

and we get implicitly deﬁned solutions of y(x).Example 1. Consider

We can separate the variables:

so the solution y(x) is implicitly given as

Example 2. Find the solution in explicit form for the equation

In explicitly form, one has two choices:

To determine which sign is the correct one, we check again by the initial condition:

We see we must choose the ‘-’ sign. The solution in explicitly form is:

On which interval will this solution be defined ?

We can also argue that when x = −2, we have y = 1. At this point |dy/dx| → ∞, therefore solution can not be deﬁned at this point.The plot of the solution is given below, where the initial data is marked with ‘x’. We also include the solution with the ‘+’ sign, using dotted line. 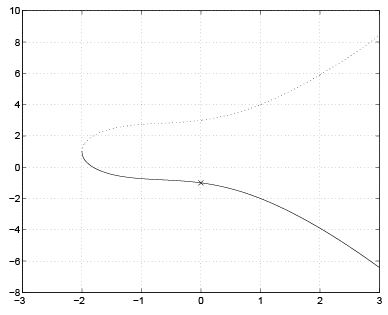 we get the solution

and identify the interval where solution is valid.Answer.Separate the variables

Note that solution is given in implicitly form.To ﬁnd the valid interval of this solution, we note that y′ is not deﬁned if 3y2 − 6y = 0, i.e., when y = 0 or y = 2. These are the two so-called “bad points” where you can not deﬁne the solution. To ﬁnd the corresponding values of x, we use the solution expression:

Diﬀerences between linear and nonlinear equations

We will take this chapter before the modeling .For a linear equation

we have the following existence and uniqueness theorem.Theorem . If p(t) and g(t) are continuous and bounded on an open interval containing t0, then it has an unique solution on that interval.

Example 1. Find the largest interval where the solution can be deﬁned for the following problems.

So the interval is

we have the following theorem:

are continuous and bounded on an rectangle (α < t < β , a < y < b) containing (t0, y0 ), then there exists an open interval around t0, contained in (α, β ), where the solution exists and is unique.We note that the statement of this theorem is not as strong as the one for linear equation.Below we give two counter examples.

We ﬁrst note that at y = 0, which is the initial value of y, we have y′ = f (t, y) → ∞. So the conditions of the Theorem are not satisﬁed, and we expect something to go wrong.Solve the equation as an separable equation, we get

We lose uniqueness of solutions.

Note that f (t, y) = y2, which is deﬁned for all t and y. But, due to the non-linearity of f , solution can not be deﬁned for all t.This equation can be easily solved as a separable equation.

We see that the solution blows up as t → 1, and can not be deﬁned beyond that point.

This kind of blow-up phenomenon is well-known for nonlinear equations.