LEARNING OBJECTIVESOne of the widely used decision making problems, nowadays, is to decide on the optimal mix of scarce resources in meeting the desired goal. In simplest form, it uses several linear inequations in two variables derived from the description of the problem.The objective in this section is to make a foundation of the working methodology for the above by way of introduction of the idea of :

Inequalities are statements where two quantities are unequal but a relationship exists between them. These type of inequalities occur in business whenever there is a limit on supply, demand, sales etc. For example, if a producer requires a certain type of raw material for his factory and there is an upper limit in the availability of that raw material, then any decision which he takes about production should involve this constraint also. We will see in this chapter more about such situations.

The inequality mentioned above is true for certain pairs of numbers (x, y) that satisfy 3x + y < 6. By trial, we may arbitrarily find such a pair to be (1,1) because 3 × 1 + 1 = 4, and 4 < 6.Linear inequalities in two variables may be solved easily by extending our knowledge of straight lines.For this purpose, we replace the inequality by an equality and seek the pairs of number that satisfy 3x + y = 6. We may write 3x + y = 6 as y = 6 – 3x, and draw the graph of this linear function. 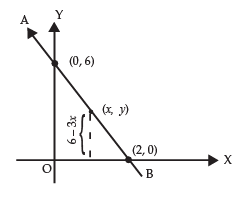 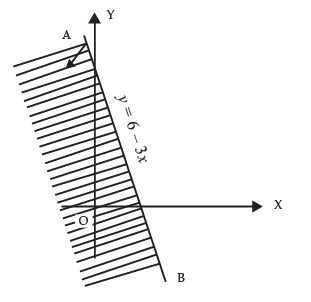 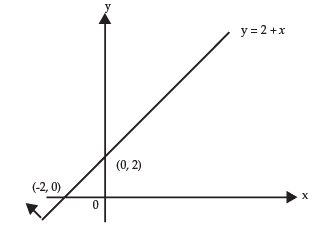 By superimposing the above two graphs we determine the common region ACD in which the pairs (x, y) satisfy both inequalities. 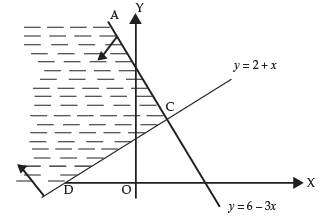 Note: [1] The inequalities 3x + y ≤ 6 and x – y ≤ 2 differ from the preceding ones in that these also include equality signs. It means that the points lying on the corresponding lines are also included in the region.[2] The procedure may be extended to any number of inequalities.

We note that the given inequalities may be grouped as follows : 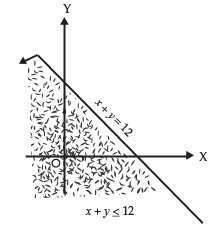 By superimposing the above three graphs, we determine the common region in the  xy plane where all the five inequalities are simultaneously satisfied. 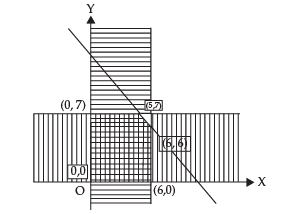 This common region is known as feasible region or the solution set (or the polygonal convex sets).

A region is said to be bounded if it can be totally included within a (very large) circle. The

shaded region enclosed by deep lines in the previous diagram is bounded, since it can be

included within a circle.

extreme points (the points of intersection of lines bounding the region) are known, a

compact matrix representation of these points is possible. We shall denote the matrix of

the extreme points by E.

The coefficients of the objective function may also be represented by a column vector. We

shall represent this column vector by C.

In the context of the problem under consideration. value of the objective function is 19.

We now list the steps to be followed under graphical solution to a linear programming problem.

Step 1 Determine the region that satisfies the set of given inequalities.

solution to the problem.

Step 3 Construct the matrix E of the extreme points, and the column vector C of the

Step 4 Find the matrix product EC. For maximization, determine the row in EC where

the largest element appears; while for minimization, determine the row in EC

where the smallest element appears.

Note: If the slope of the objective function be same as that of one side of feasible region,

there are multiple solutions to the problem. However, the optimized value of the

Let x1 be the number of units of type A product to be produced, and x2 is that of type B

product to be produced. The formulation of the L.P.P. in this case is as below: 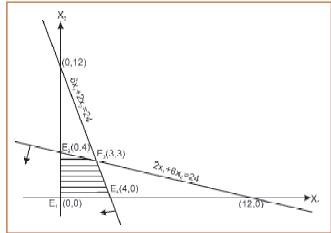 The column vector for the objective function is C

Since 21 is the largest element in matrix EC, therefore the maximum value is reached at

the extreme point E3 whose coordinates are (3,3).

Thus, to achieve maximum profit the manufacturer should produce 3 units each of both

the products A and B.

and constraints in the standardised format.

(ii) Plotting the capacity constraints on the graph paper. For this purpose normally two

terminal points are required. This is done by presuming simultaneously that one of

only one origin point and it will run parallel to the other axis.

(iii) Identifying feasible region and coordinates of corner points. Mostly it is done by

breading the graph, but a point can be identified by solving simultaneous equation

relating to two lines which intersect to form a point on graph.

(v) For decision – making purpose, sometimes, it is required to know whether optimal

point leaves some resources unutilized. For this purpose value of coordinates at the

Thus, the conditions can be expressed using linear inequalities 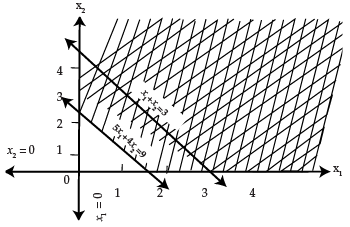 Example: Draw the graph of the solution set of the following inequality and equality:x + 2y = 4.x – y ≤ 3.Mark the common region. 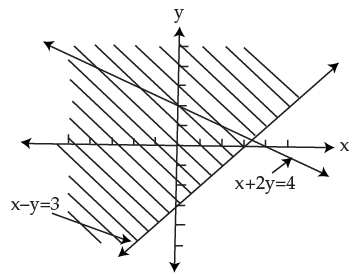 The common region is the one represented by overlapping of the shadings. Example: Draw the graphs of the following linear inequalities:

and mark the common region. 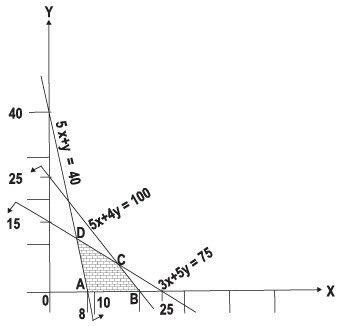 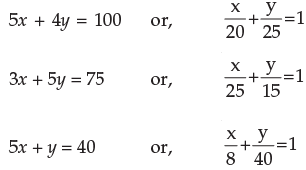 Plotting the straight lines on the graph paper we have the above diagram:The common region of the given inequalities is shown by the shaded portion ABCD. 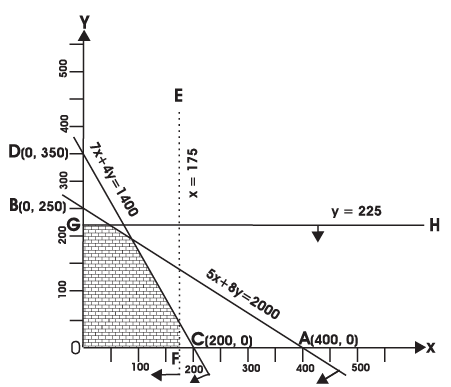 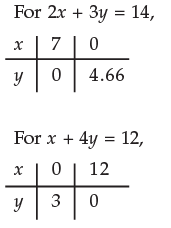 In the above graph we find that the shaded portion is moving towards infinity on the positive side. Thus the result of these inequalities is unbounded.