1. Penetration test: An indirect method of measuring viscosity is the measure of penetration of a standard needle under standard conditions of load, time & temperature. The test measures the hardness or softness of bitumen in terms of penetration expressed in mm/10th of std needle. Temperature= 250C [test to be performed after sample is kept for 1hr in H2O bath at this temperature]Load on needle = 100 gTime in which penetration is recorded = 5 sThe penetration is measured by a graduated dial.Bitumen is softens to a poring consistency a depth more than 15mm in the container is poured. The expected penetration sample is cooled in 60 min in air and 60 min in water before testing. The standard needle is positioned to get a penetration value for 5sec and is noted.The penetration value obtained is represented in 80-100 or 80/100 grade bitumen at standard consistence and it range from 20-225mm.In cold region bitumen with High penetration value is used.In warm region low penetration value is used ex. 30/40 grade.The factors which affect the Penetration test is test temperature, needle size and weight and period of cooling.1. Softening point: The softening point is the temperature at which the substance attains a particular degree of softening under specified condition of test. A viscosity material like bitumen or tar doesn‟t have a well defined softening point. However a std test determines the temperature at which a std ball will pass through a disc of bitumen contained in ring. The test is known as ring & ball test.A brass ring of internal dia 17.5 mm at top and 15.9 mm at bottom and of depth 6.4mm.The steel ball of 9.5mm dia and 2.5g. Support distance is 25mm between the bottom of the ring and top surface of the bottom plate of support is provided. Glass container of 85mm dia and 120mm depth is used. The bitumen is heated to poring consistency and poured into ring and cooled for half an hour before testing. A brass ring containing the bitumen sample is suspended in H2O or glycerin at given temperature a steel ball is placed on the disc of bitumen. The liquid medium is then heated at a rate of 50C increase per minute. Metal plate placed at a specified bituminous material touches the bottom at the softening point. With increase in temperature bitumen melts and come down with the weight of ball at particular temperature it touches the bottom plate that point temperature is noted.The softening point is range between 35 to 750C.The liquid water is used for bitumen having softening point less than 800C and Glycerine is for softening point more than 800C.Higher softening point indicates lower temp. susceptibility and in warm climet.The factors which affect the softening points are quality and type of liquid used, weight of ball, distance between bottom of the ring and bottom base plate and rate of temperature. 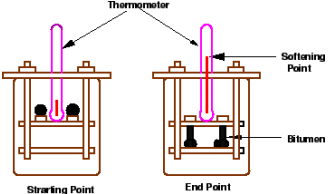 2. Ductility test: In flexible pavement construction it is important that the binders form ductile thin film around the aggregate. This serves as a satisfactory binder in improving the physical interlocking of the aggregate bitumen mixes. Under traffic loads the bitumen layer is subjected to repeated deformation and recoveries. The binder material which does not possess sufficient ductility would crack and thus provide pervious pavement surface. The test is believed to measure the adhesive property of bitumen and its ability to stretch. The ductility of a binder is an indication of its elasticity & ability to deform under load & return to original condition upon removal of the load. A material which doesn‟t possess adequate ductility would crack under a load.This is unsatisfactory since water can penetrate into the surfacing through there cracks. The property is determined by measuring the distance that a std briquette of bitumen, necked to a cross section of 1 sq-cm will stretch without breaking when elongated at a rate of 5 cm/min at 270C. The ductility values should be a minimum of 50 as per IS. The briquette mould is filled with bitumen and cool for 30 min in air and 30 min in water before testing. Then it is fixed to expanding machine assembly which stretches the bitumen at a rate of 5cm/min and expands till to break and the point is noted by scale. The factors which affect the ductility is pouring and test temperature, dimension of briquette mould, rate of pulling and period of cooling.

3. Viscosity Test: Viscosity is the property of a fluid that determines the resistance offered by the fluid to a shearing force under laminar flow conditions, it is thus the opposite of fluidity. The determination of viscosity is generally done by efflux viscometers. They work on common principles, though they differ in detail. The liquid under test is poured to a specified level into a container surround by water or oil bath providing temperature control at the base of the container is a small orifice with a simple valve control on opening valve, the time in seconds is recorded for a stated quantity of liquid to discharge into a measuring liquid below. The different type of viscosity testing operator is there they are Efflux viscometer, Standard tar viscometer (10mm dia orifice and 50ml fluid to discharge), Saybolt furol viscometer (3mm dia orifice and 60ml fluid to discharge).The bitumen is placed in to a standard tar viscometer or efflux viscometer and its temperature is raised to test temperature specified (35, 40, 45, 55& 600C). When the temperature reaches respective test temperature orifice valve is open time elapse is noted to collect the bitumen of 50ml. The time required to collect a bottom container of 50ml is five indirectly the viscosity of bitumen. Then is specified in VG 10, VG20, VG 30 and VG 40.

4. Specific gravity test: In most applications bitumen is weighed, but finally in use with aggregate the bitumen content is converted on volume basis. Hence determine of specific gravity value is required for conversion of weight to volume. Specific gravity of a binder doesn‟t influence its behavior but all the same, its value is needed for mix design. Specific gravity of bitumen varies from 0.97 to 1.02.Specific gravity of tar varies from 1.16 to 1.28.There are two methods to test the specific gravity of bitumena. Pycnometer methodb. Balance methodGenerally balance method is used in that a cup of 50ml capacity is used and it is oiled before using. The bitumen is poured in to cup and cooled and its weight e is noted and weight of cup with bitumen when immersed in distilled water is weighed f. Specific gravity of bitumen is the ratio of e to the difference between (e and f).It is used to convert the weight in to volume. Determines Purity of bitumen if the impurity present in the bitumen by showing high value of specific gravity.5. Heat stability test: When a bituminous binder is heated continuously it starts emitting volatile vapors above a certain temperature and these volatile vapors can momentarily catch fire in form of flash and continued heating get fired.a. Flash point: The flash point of bitumen is that temperature at which it gives off vapors, which ignites in the pressure of a flame, but don‟t continue to burn. The flame point is an induction of critical temperature at & above which suitable precautions should be taken to eliminate fire hazards. The ISI test describes the Penske-Martin method. The method involves a cup into which the bitumen is filled. The bitumen sample is then heated at a rate of 5-6 0C/min stirring the material continuously. The test flame is applied at intervals. The flash point is taken at the temperature read on the thermometer when flame causes a bright flash in the interior of cup in a closed system & at the surface of material in open system. It is 2200 c.b. Fire point test: If heating is continued beyond the flash point, the vapors ignite in the pressure of a flame & continue to burn indicating the fire point temperature. There is no standard method to determine the spontaneous ignition temperature, which can only broadly indicate.c. Loss on heating test: The effect of heat on a bituminous binder is the loss of volatile constituents. This loss causes the binder to harden. Thus one method of testing the desirable property of a binder is to find out the loss on heating. This is achieved by an accelerated heating test a 50gm sample is weight is taken and maintained at a temperature of 1600 c for 5hours. Then it expressed as a percentage of loss in original weight is determined.6. Solubility test: It has already been indicated that all bitumen are substantially soluble in CS2. This is one of the points that define bitumen. Hence any impurity in bitumen in the form of inert minerals, carbon, salts etc. could be quantitatively analyzed by dissolving the samples of bitumen in any of the two solvents.A sample of 2g of bitumen is dissolved in 100ml of solvent and filtered in soluble material is washed, dried and weighed then it is expressed in percent of original sample. The Indian specifications require 99% solubility.7. Thin film oven test: In this test, a sample of bitumen is subjected to hardening conditions as would be expected during hot mixing operations. A 50ml sample of bitumen is placed in a flat bottomed sample pan 140mm inside diameter & 10mm deep, the weighed sample & container are placed in a shelf which rotates at 5 to 6 rpm for 5 hrs in a ventilated oven maintained at 1630C. The loss in weight of the sample is expressed as % of the original weight. This method is then used for identify short term aging or hardening of bitumen.Tar Tar is the viscous liquid obtained when natural organic materials such as wood and coal carbonized or destructively distilled in the absence of air. Based on the materials from which tar is derived, it is referred to as wood tar or coal tar. It is more widely used for road work because it is superior.There are five grades of roads tar: RT-1, RT-2, RT-3, RT-4 and RT-5, based on their viscosity and other properties.RT-1 has the lowest viscosity and is used for surface painting under exceptionally cold weather as this has very low viscosity.RT-2 is recommended for standard surface painting under normal Indian climatic conditions.RT-3 may be used for surface painting, renewal coats and premixing chips for top course and light carpets.RT-4 is generally used for premixing tar macadam in base course.RT-5 is adopted for grouting purposes, which has highest viscosity among the road tars. The various tests carried out on road tars are:a) Specific gravity testb) Viscosity test on standard tar viscometerc) Equiviscous temperature (EVT)d) Softening pointe) Softening point of residuef) Float testg) Water contenth) Phenols, percent by volumei) Naphthalene, percent by weightj) Matter insoluble in toluene, percent by weightk) Distillation fraction on distillation upto 200°C, 200°C to 270°C and 270°C to 330°CThe properties and requirements for five grades of road tars based on the above test results are given by the ISI are given in below table.