Ans: The Ganga action plan was, launched by Sri Rajeev Gandhi, the then Prime Minister of India on 14 Jan. 1985 with the main objective of pollution abatement, to improve the water quality by Interception, Diversion and treatment of domestic sewage and present toxic and industrial chemical wastes from identified grossly polluting units entering in to the river. The other objectives of the Ganga Action Plan are as under.

Q2: Clear transparent water is always fit for drinking, do you agree?

Ans: No, clear and transparent water is not always fit for the purpose of drinking. There are possibilities of disease causing microbes and dissolved impurities in the clear and transparent water. So, it is important to purify water before drinking , water can be purified by using water purifiers, by chlorination and by boiling.Q3: Explain air pollution and its harmful effects. Also list some important measures to reduce air pollution.

Air pollution is a significant risk factor for multiple health conditions including respiratory infections, heart disease, and lung cancer. The health effects caused by air pollution may include difficulty in breathing, wheezing, coughing and aggravation of existing respiratory and cardiac conditions.

Q4: What is air pollution? Write its causes.Ans. When air is contaminated by unwanted substances which have a harmful effect on both the living and non-living, it is called air pollution.

Causes of air pollution:(i) Vehicles: Vehicles produce high level of pollutants like carbon dioxide, carbon monoxide, nitrogen oxides and smoke. Carbon monoxide is produced from incomplete burning of fuels such as petrol and diesel. It is a poisonous gas. It reduces the oxygen carrying capacity of the blood. (iv) Human activities: Uses of fuels like cow dung, coal, wood produce air pollution. Agricultural practices like burning chaff after cultivation also pollute air.Q5: What are CFCs? How do they create pollution?Ans. CFCs stands for chlorofluorocarbons. These compounds also create air pollution. These compounds are used in refrigerators, air conditioners and aerosol sprays. They damage the ozone layer of the atmosphere. Ozone layer protects us from harmful effects of ultraviolet rays coming from the sun. These compounds cause depletion of ozone layer and form the ozone hole. If ultraviolet rays come on earth, they cause sun burn and skin cancer. We can reduce the harmful effects of CFCs by using less harmful chemicals in place of CFCs.

Q6: What is acid rain? How does it affect the Taj Mahal?Ans. The industries located in and around Agra like rubber processing, automobile, chemicals and especially Mathura Oil Refinery produce pollutants like sulphur dioxide and nitrogen dioxide. These gases react with water vapours present in the atmosphere to form sulphuric and nitric acids. These acids mix with rain water. Such type of rain is called acid rain. Acid rain corrodes the marble of the Taj Mahal. This phenomenon is also called marble cancer.Q7: What is greenhouse effect? How does it cause global warming?Ans. The process of trapping of radiation by the earth’s atmosphere is called greenhouse effect. By this process the warming of the earth takes place. Without this process life would not have been possible on earth. But now it threatens life. CO2, methane, nitrous oxide, and water vapour are called greenhouse gases because they all contribute towards this effect.CO2 is one of the components of air. As the amount of CO2 increases in the atmosphere due to which more greenhouse effect takes place. As a result, the average temperature of the earth’s atmosphere is gradually increasing. This is called global warming.

(i) Domestic discharges: The sewage from homes is collected and disposed off in rivers which cause water pollution.

(ii) Industrial discharges: Various harmful and toxic chemicals are discharged by various industries directly into the water. These chemicals spoil the water and make it unfit for drinking.

Q9: Explain Ganga Action Plan.Ans. An ambitious plan to save the river is called Ganga Action Plan. It was launched in 1985 to reduce the pollution level in the river. However, the increasing population and industrialisation have already damaged this mighty river beyond repair. 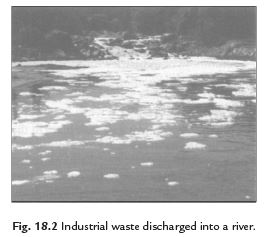 Ganga at Kanpur in Uttar Pradesh has one of the most polluted stretches of the river. Kanpur is one of the most populated town in U.P. People can be seen bathing, washing clothes and defecating in the river. They also throw garbage, flowers, idols of gods and goddesses and non-biodegradable polythene bags into the river. The industrial units discharge toxic chemicals and wastes into the river. Due to these activities the water in Ganga is polluted. Ganga Action Plan is related to reduce pollution in Ganga.Q10: What is potable water? Write its properties.Ans. The water which is suitable for drinking is called potable water.Properties: (i) It is colourless.(ii) It is odourless.(iii) It is transparent.(iv) It is germless.

Q11: Explain the process of water treatment to make it drinkable.Ans. The water obtained from various sources is not safe for drinking. It requires purification before being supplied for drinking. Water is pumped from a source such as river or lake and is collected in a tank. The water is then cleaned in water works by allowing it to filter through layers of gravel and sand. It removes the dirt from water. Then water is treated with some chemicals like chlorine to kill the germs. The water is then supplied to the localities where it is to be used for drinking purposes. The document Long Answer Question - Pollution of Air and Water - Notes | Study Science Class 8 - Class 8 is a part of the Class 8 Course Science Class 8.
All you need of Class 8 at this link: Class 8
Attempt Now
Join Course