Q1: Why frog lays egg coverless, whereas, Hen lays it with hard cover? Explain.Ans: Hen reproduces through internal fertilization in which the egg is already fertilized before coming out as in form of egg.In the case of frog there is external fertilization, hence, egg fertilizes outside the female body. Female lays coverless eggs in the water body later male deposit there sperm over them. And with the help of tail, the sperm swims and fuses with egg. If these eggs have hard covering then it is impossible for the sperm to fuse with them and thus the reproduction cannot be possible.

Q2: Explain the importance of reproduction in organisms.

Ans: Reproduction is a process which is essential to maintain the life of an individual.The organisms reproduce because of the two main reasons: -

Q3: Explain cloning with an example of first cloned animal. Ans: Cloning is defined as the production of exact copy of a cell, any other living part or a complete organism. Cloning of an animal was first of all performed successfully by Lan Wilmut and his colleagues, for the first time a sheep named as dolly was cloned successfully; Dolly was born on 5 July 1996 and was the first mammal to be cloned. The process of cloning involve collection of cell from the mammary gland of a female Finn Dorsett sheep and an egg whose nucleus was removed was obtained from a Scottish blackface ewe then nucleus from the mammary gland of Finn Dorsett sheep was inserted into egg of Scottish blackface ewe, the egg thus produced was implanted into the Scottish blackface ewe, development of this egg take place normally and finally Dolly was produced. 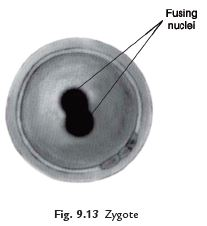 Q6: Explain the fertilisation in frog.Ans. In frogs external fertilisation takes place. During rainy season frogs move to ponds and slow-flowing streams. When the male and female frog come together in water, the female lays hundreds of eggs. The eggs of frog are not covered by a shell and they are comparatively very delicate. A layer of jelly holds the eggs together and provides protection to the eggs. As the eggs are laid, the male deposits sperms over them. Each sperm swims randomly in water with the help of its tail. The sperms come in contact with eggs and fuse together. This results in fertilisation Q7: Explain the development of embryo.Ans. Fertilisation results in the formation of zygote which begins to develop into an embryo. The zygote divides repeatedly to give rise to a ball of cells. The cells then begin to form groups that develop into different tissues and organs of the body. This developing structure is termed as embryo. This embryo gets embedded in the wall of the uterus for further development. The embryo continues to develop in the uterus. It gradually develops body parts such as hands, legs, head, eyes and ears etc. This stage is called foetus. Mother gives birth to the baby when foetus developed completely. Fig. 9.15 (a) Zygote formation and development of an embryo from the zygote; (b) Ball of cells (enlarged); (c) Embedding of the embryo in the uterus (enlarged).

Q8: Explain the formation of clone Dolly.Ans. Cloning is the production of an exact copy of a cell, a part or complete body. Dolly was the first clone born on 5th July 1996 and was the first mammal to be cloned. It is cloned by Ian Wilmut and his colleagues. During the process of cloning Dolly, a cell was collected from the mammary gland of female Finn Dorsett sheep. Simultaneously, an egg was obtained from a Scottish blackface ewe. The nucleus was removed from the egg, then the nucleus of mammary gland cell from the Finn Dorsett sheep was inserted into egg of Scottish blackface ewe. Development of this egg followed normally and finally Dolly was born. It was found to be absolutely identical to the Finn Dorsett sheep and produced several offspring of her own through normal sexual means. Dolly died on 14th February 2003 due to a certain lung disease.

The document Long Answer Question - Reproduction in Animals - Notes | Study Science Class 8 - Class 8 is a part of the Class 8 Course Science Class 8.
All you need of Class 8 at this link: Class 8
Attempt Now
Join Course