The document Long Answer Questions - Combustion and Flame Notes | EduRev is a part of the Class 8 Course Science Class 8.
All you need of Class 8 at this link: Class 8

Q1: What are the advantages of using CNG and LPG as fuels?

Ans: The advantages of using CNG and LPG as fuels are as follows:1. They both are cleanest burning fuels of all fossil fuels.2. They are less polluting, non-corrosive.3. They can be sent through pipes easily.4. These are easily available and have affordable cost.5. LPG and CNG both are easy to store and transport.6. As there calorific value is very high therefore, they are used for cooking purpose.Q2: Differentiate between LPG and wood as fuel.

Q3: Explain working and principles of a fire extinguisher.

Ans: The most commonly used fire extinguisher is water, it works when wood and paper are on fire, but if electrical equipment is on fire water may conduct electricity and may harm those trying to douse the fire, also water is not suitable for fires involving oil and petrol, since water is heavier than oil it sinks below the oil and oil keeps burning on the top. So if electrical equipment and inflammable materials are on fire Carbon dioxide is the best extinguisher. Since it is heavier than oxygen it covers the fire so that the contact between fuel and oxygen is cut off and the fire is controlled, it also bring s down the temperature of the fuel. For this purpose carbon dioxide is stored at high pressure as a liquid in cylinders.Q4: Explain why the process of rusting can be called as slow combustion. 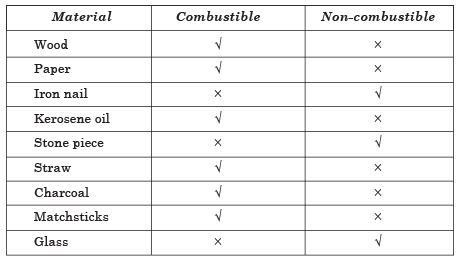 Q6: What are the essential conditions for combustion? Explain with the help of an activity. Ans. Take a candle. Light it and fix it on a table. Put a glass chimney over the candle and rest it on wooden blocks in such a way that air can enter the chimney. We see that candle remains lighted. Remove the blocks and let the chimney rest on the table. We see that the flame flickers and produces smoke. Now put a glass plate over the chimney. We see that flame goes off because air is not available. This activity shows that air is essential to burn a fuel at its ignition temperature. Q7: Describe the history of the matchstick. Ans. History of matchstick is about five thousand years old. The modern safety match was developed only about 200 years ago. A mixture of antimony trisulphide, potassium chlorate and white phosphorus with some glue and starch was applied on the head of a match made of suitable wood. When it struck against a rough surface, white phosphorus got ignited and combustion of matchstick started. These days red phosphorus is used in place of white phosphorus.

Q9: Write three examples of each type of fuel in tabular form.Ans.

Q10: Make a table to show the calorific value of various fuels.Ans.

Q11: What is deforestation? Write its effect on environment.Ans. Cutting of trees is called deforestation.Effects: Deforestation is very harmful to the environment.The following are the effects of deforestation:1. The annual rainfall is disturbed in that area.2. The frequent floods come.3. Balance of oxygen and carbon dioxide is disturbed.4. It causes respiratory problem.5. Trees provide us with useful substances which are lost due to deforestation.

Q12: What are the ill-effects due to the increasing consumption of fuel?Ans. Harmful effects of using more fuels: (i) Carbon fuels like wood, coal and petroleum release unburnt carbon particles. These fine particles create respiratory disorders and diseases like asthma.(ii) Incomplete combustion of these fuels gives carbon monoxide. It is very harmful gas and causes respiratory disorders. It can kill persons sleeping in that room.(iii) Excessive use of fuels causes global warming.(iv) They cause acid rain which is harmful for crops, buildings and soil.