Q. 1. Describe the major factors which control the distribution of insolation on the earth.Ans. The distribution of insolation varies from latitude to latitude. Different parallels receive different amount of insolation. The following are the major factors which control the distribution of insolation : 1. Intensity of insolation or angle of incidence of sun’s rays.  The intensity of insolation depends upon the angle of incidence of sun’s rays. Due to the spherical shape and inclination of the axis of the earth, the angle of sun’s rays varies from latitude to latitude. The sun shines vertically at the equator but the angle of sun’s  rays decreases towards poles. The vertical rays deliver more energy per unit area than oblique rays. Vertical rays heat up a smaller surface area and hence the heat received per unit area is large. Vertical rays travel in shorter distance through the atmosphere. The loss of heat through atmosphere is small. On the other hand the oblique rays are spread over a large area and the heat per unit area is much less. The oblique rays have to pass a greater distance through the atmosphere and it results in a large amount of loss of heat.

2. Duration of solar radiation of length of day.

Due to the inclination of axis and the revolution of the earth, the length of day varies from place to place. The days are longer in summer and shorter in winter, as we go away from the equator. The longer the sun shines, the greater the amount of the insolation received. The two factors operate jointly. The length of the day and the angle of the sun’s rays are equal on all parts of the same parallel. Therefore, all places on the same parallel receive the same amount of the insolation.3. Effect of atmosphere. The atmosphere weakens the insolation by the process of scattering, reflection and absorption. Dust particles, water vapours and gases reduce the amount of insolation.The oblique rays have to travel a greater distance through the atmosphere and it results in the larger amount of loss of heat.4. The distance between the earth and the sun.The distance between the sun and the earth varies at several positions in its orbit. In January (Perehelion), the earth is only 165 million kms. away from the sun.

In July (Aphelion), the earth is 170 million kms. away from the earth. More insolation is received by the earth when it is closer to the sun.5. Number of Sun Spots. Number of sun spots increases and decreases with a period, with the result the solar output changes from time to time.6. Distribution of Land and Water. Land and water do not receive equal amount of insolation. Land becomes quickly heated and cooled, while the water is slowly heated or cooled. Therefore, the amount of the insolation received on continents and oceans varies.

1. Latitude: The temperature decreases gradually from the equator to the poles. The intensity of insolation depends on the angle of incidence of sun’s rays. Vertical rays are hotter than slanting rays. Vertical rays heat up a smaller surface area and travel through a shorter distance in the dense atmosphere.Hence the heat received per unit area is large. On the other hand, slanting rays heat up a large area and travel through a longer distance in the atmosphere where much of its heat is absorbed by clouds, water vapours, dust particles. The equatorial region gets maximum temperature as the sun’s rays fall vertically over the equator throughout the year. In polar areas, the low temperature is found due to more oblique or slanting rays. For example, Chennai is warmer than Kolkata. 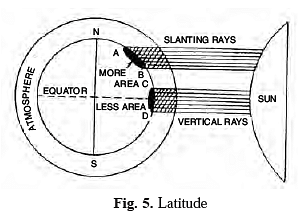 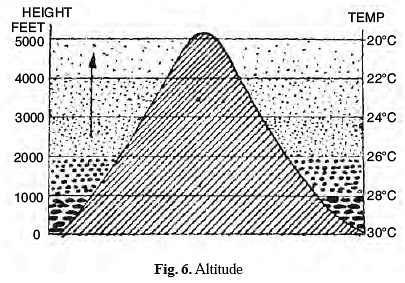 The atmosphere is mainly heated by conduction from the earth. Therefore, the lower layers nearer the earth are warmer than higher layers  of the atmosphere. For this reason the mountains are cooler than plains. The air is rarefied and there is absence of dust particles and water vapour on mountains; so there is unchecked radiation. For example, Shimla is cooler than Ludhiana.3. Distance from the Sea: The nearness to sea has moderating influence on the temperature of coastal areas. Maritime or equable temperatures are found in coastal areas. But extremes of temperatures  with continental climate are found in inland areas remote

from the sea. Due to the presence of land and sea breezes in coastal areas; the summers are warm and winters are cool. This is due to the differential heating and cooling of land and water. Land surfaces are heated more quickly than water. But a greater annual range of  temperature is found as we go away from equator. The climate of Mumbai is more equable than that of Delhi. 4. Prevailing Winds: Prevailing winds affect the temperature of an area by transporting their heat and coldness. A wind from the sea lowers  the summer temperature and raises the winter temperatures. The on-shore westerlies tend to moderate the temperatures of N. W. Europe. A wind from the land lowers the winter temperature and raises the summer temperature. The out-blowing cold winds from Central Asia cause a ‘cold wave’ in winter in North China. 5. Ocean Currents: Ocean currents modify the temperature of the winds blowing over them. Warm currents raise and cold currents lower the temperature of coastal areas. Winds blowing over the warm currents make coastal areas warm and moist. The gulf stream current makes winter moderate in N.W. Europe and keeps their ports ice free. Winds blowing over the cold currents lower the temperature and humidity. N.E. coast of Canada remains frozen  during the major part of winter due to cold Labrador current. 6. Direction of the mountains: Mountains act as climatic barriers. The Himalayas check the cold winds coming from Central Asia and protect India from the cold wave. Tibet is surrounded by high mountain ranges and is cut off from oceanic influences. 7. Slope of the land: South facing slopes are warmer than North facing slopes. The northern slopes are exposed to cold  winds;  these mostly lie in shadow and are ‘shady’ slopes, these slopes get oblique rays of the sun. But on the other hand, southern slopes are sheltered from cold winds, these receive sun’s rays more directly and also for longer periods, these are mostly sunny slopes.

The Southern slopes of the Himalayas (towards India) are warmer than the Northern slopes (towards Tibet). 8. Cloudiness and Rainfall: Clouds check sun’s rays and reduce the temperature during the day. At night, clouds check the outgoing radiation and do not allow the temperature to fall. Under clear skies, such as in deserts, very high day temperatures are recorded; but night temperatures fall rapidly. Heavy rain also helps to reduce the temperature. 9. Vegetation and Soils: Forests have a cooling effect on the air. Sandy soils are heated and cooled very quickly as in Rajasthan desert; but clay soils warm p or cool down more slowly.