Q.1. Distinguish between Relative Humidity and Absolute Humidity. Explain the relation between Relative Humidity and Rainfall.Ans. Absolute Humidity. Total amount of water vapour present in air at a particular temperature is absolute humidity. It is defined as the weight of water vapour per unit volume of air. It is expressed as grams per cubic metre of air. Absolute humidity is not a reliable index. It changes with the changes in volume of air. So absolute humidity varies with contraction or expansion of the air.

Relative Humidity. Relative humidity is expressed as percentage. It is a ratio between the actual amount of the water vapour present in the air at a temperature and the maximum amount of water vapour which the same volume of air can hold at the given temperature.

In other words, it is a ratio, expressed in percentage, between the absolute humidity and the maximum vapour capacity of the air.

Distribution : (i) Relative humidity is maximum at the equator and decreases polewards.(ii) It is maximum in early morning and minimum in the afternoon.(iii) It is low in hot deserts, in continental interiors, and in areas of anti-cyclonic conditions.(iv) It is high during rainy season.

Q. 2. How is rainfall caused ? Describe with examples, the different types of rainfall.Ans. Rainfall. Humidity is the basis of rain. The general cause of rainfall is the cooling of saturated air.The mechanism of rainfall passes through many stages.(i) Condensation. Due to adiabatic cooling (10° C per 1 km), the rising air is cooled. The moist air is saturated and condensation takes place.(ii) Formation of clouds. Water vapour is condensed on a large number of dust particles floating in the air. These are known as hygroscopic particles. Cloud particles are formed on these.(iii) Formation of rain drops. The cloud particles are very small in size. These cloud droplets coalesce (merge) to form rain drops. One rain drop often contains one million cloud droplets. When these rain drops become so heavy that the air cannot hold these, they fall on the earth in the form of rainfall. Thus, the release of moisture in the form of drops of water is called rainfall. 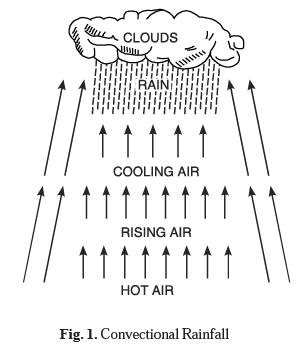 2. Orographic Rainfall. This type of rainfall is caused when moist air is forced to ascend a mountain barrier. The air rising up the mountain slope (windward slope) causes expansion, cooling and condensation. The windward slope gets the maximum rainfall. On the leeward slope, the air is descending. It increases the pressure and temperature as the air is compressed and warmed. There is evaporation but no condensation. These areas remain dry and are known as Rain-shadow areas. Since this type of rainfall is caused by relief of the land, it is known as relief rainfall.In summer, S. W. monsoons give heavy rainfall on the Western Ghats, but Deccan plateau is practically dry as it lies in the rain shadow of Western Ghats. 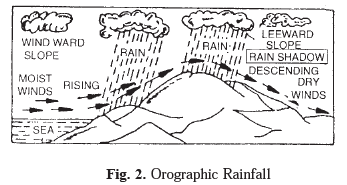 3. Frontal Rainfall. This type of rainfall is caused by convergence of warm and cold air masses along a front. The warm air is lighter and tends to rise over the cold air. In ascent, the pressure decreases, the air expands and cools and condensation takes place. As this rainfall is associated with cyclones, it is called as cyclonic rainfall. The rainfall is slow, continuous and extensive. The rain is common in N. W. Europe in winter. Punjab plains experience rainfall in winter from cyclones coming from Mediterranean Sea.

Q. 3. How are Clouds formed ? Discuss their types.Ans. Clouds:
Clouds are formed by the condensation of water vapour around nuclei of minute dust particles in the air. In most cases, clouds consist of tiny droplets of water, but they may also consist of ice particles if the temperature is below freezing point. Most clouds are formed by the rising warm and moist air. The ascending air expands and cools until the dew point is reached and some of the moisture condenses into clouds. Other clouds result from mixing between two air masses of different temperatures. (Fig. On next page) Clouds at and near the earth's surface are known as fog.

The ten types of clouds are combined into three groups based mainly on the average height of the cloud base. They are as given below :

(I) High Clouds.(i) Cirrus (Ci). These are fibrous clouds with a delicate, silky appearance. When detached and arranged irregularly in the sky, they are harbingers of fair weather. On the other hand, when they are systematically arranged, as in bands, or connected with cirrostratus or altostratus, they usually foretell wet weather.(ii) Cirrostratus (Cs).  A thin, whitish sheet of cloud covering the whole sky and giving it a milky appearance is called cirrostratus. These clouds commonly produce a halo around the sun and the moon. They are usually signs of the approaching storm.(iii) Cirrocumulus (Cc). These clouds appear as small white flakes or small globular masses, usually without shadows. They are usually arranged in groups, lines or ripples resulting from undulation of the cloud sheet. Such an arrangement is called mackerel sky.(II) Middle Clouds. (i) Altostratus (As): A uniform sheet of cloud, gray or bluish in colour, and usually having a fibrous structure belong to this group. It often merges gradually with cirrostratus. The sun and the moon shine wanely through these clouds. Sometimes it also presents a corona. Altostratus commonly is followed by widespread and relatively continuous precipitation.(ii) Altocumulus (Ac): These are flattened globular masses of clouds, arranged in lines or waves. They differ from cirrocumulus as they have larger globules, often with shadows.(III) Low Clouds(i) Stratocumulus (Sc): Large globular masses or rolls of soft gray clouds with brighter interstices belong to this group. The masses are commonly arranged in a regular pattern.

(ii) Stratus (St): These are low uniform layers of clouds resembling fog, but not resting on the ground. Thin stratus clouds produce a corona.(iii) Nimbostratus (Ns) :  They are dense, shapeless and often ragged layers of low clouds, which commonly cause continuous rainfall.(iv) Cumulus (Cu) : These are thick, dense clouds with vertical development. The upper surface is dome shaped with a cauliflower structure, while the base is nearly horizontal. Most cumulus clouds are of fair weather type, although lowering cumulus may develop into cumulonimbus or thunderheads.(v) Cumulonimbus (Cs) : Heavy masses of cloud with great vertical development whose summit rise like mountains or towers is called cumulonimbus. An anvil shaped top is its characteristic. It is often accompanied by heavy showers, squalls, thunders torms, and sometimes hail.