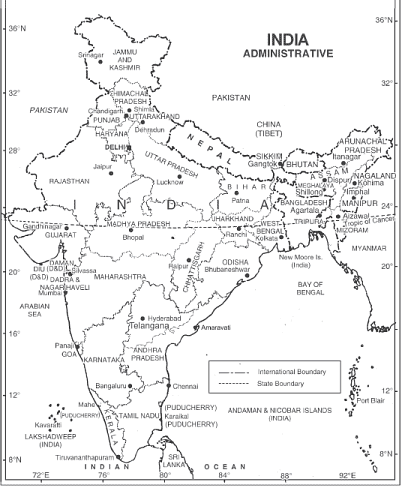 (i) The natural frontiers of India provide an isolated character to the vast Indian landmass. The Himalayas in the north, the Indian Ocean in the south, thick and dense forests on the east and Thar desert on the west separate it from the main continent.(ii) India is surrounded by the major realms of Asia on all sides. The great mountain wall encloses the Indian sub-continent and practically gives it an independent form.(iii) India covers a fairly large area ranking seventh in the world. India is the second largest populated country of the world. These two elements compare India with a sub-continent.(iv) India is a land of severe contrasts. But it has a cultural unity behind this diversity.(v) Monsoon climate determines the life of people and economic development of the country. These are independently and perfectly developed in India. It gives a distinct character of a sub-continent to this landmass.(vi) The abundant agricultural resources, mineral resources and other natural resources also compare it with a sub-continent.

Q. 2. Explain the importance of Geographical location of India.Ans. Importance of Geographical location of India.(1) Central Locations. India is centrally located on the Eastern hemisphere. Europe and Western Parts of America are equidistant from India.(2) Trade Routes. India is favourably located for international trade. Many trade routes are through Indian ocean.(3) Nearness to Tropic of Cancer. The tropic of cancer passes through the centre of India. So India is a tropical country. The long growing season makes India an agricultural country.(4) Long Coastline. India has a long coast-line which provides many deep, protected and natural harbours.(5) Defence. The natural boundaries are favourably located from defence point of view.(6) Effect of Indian Ocean. The Indian ocean leads to the origin of rain giving monsoons.(7) Effect of Himalayas. The unbroken chain of Himalayas acts as a climatic barrier. It forces monsoons to give rainfall and protects northern India from cold polar winds.

Q. 3. Describe how geographical features of the country have fostered unity and homogeneity in the Indian socieity.Ans. The vastness of India has produced a diversity in the physical conditions of the country. But there is a fundamental cultural unity behind all this diversity.Indian culture has developed independently. The land frontiers and the water frontiers have given a partially enclosed character to the Indian sub-continent. The following two features have fostered a unique homogeneity in the Indian civilization.(i) The unbroken chain of lofty mountains in the north has isolated India from the rest of Asia. It has played a great uniflying role in strengthening our people.(ii) The vast expanse of Indian Ocean has separated India as an independent unit. The Indian Ocean has provided our links with countries of West Asia and South East Asia.

Q. 4. ‘India had strong geographical and historical links with her neighbours.’ Explain by giving examples.Ans. India has been linked with S.E. Asia, West Asia, Africa, Central Asia, Indian culture spread to many distant countries such as Indonesia. Bali island, Cambodia and Egypt. These cultures also had an impact on the India culture.(i) The Indian culture spread to distant lands through ocean routes of the Indian Ocean. The muslin, species, were sent to other countries.(ii) The mountain passes in the north provided many openings and transport facilities for the outsiders.(a) The pastoral nomads entered India through the mountain passes of Khyber and Bolan.(b) The Buddhist Bhikshus crossed into Tibet, China and Japan to carry their message of peace.(c) Alexander invaded India through these mountain passes and brought Green sculptures, domes, and minerates to India.(d) Indian merchants has trade links with Central Asia, Afghanistan and Iran through these routes.(e) The Mongols, Turks, Arabs and Iranians came as conquerers and settled down in India. They took back the Indian numerals, the decimal system and the ideas of the Upanishads to their countries. This give and take and exchange of ideas, goods and art have enriched the Indian culture.