Q.1. Explain the ‘Objective Resolution’ of 1946.Ans. The first session of the Constituent Assembly was held on Dec. 9, 1946. On December 13, 1946, Pt. Jawaharlal Nehru moved the Objective Resolution.Some of the important provisions of the Objective Resolutions were as follows:
(a) This Constituent Assembly declares its firm and solemn resolve to proclaim India as an Independent Sovereign Republic and to draw up for the future governance a Constitution.
(b) Wherein all power and authority of the sovereign Independent India, its constituent parts and organs of the government are derived from the people; and
(c) Wherein shall be guaranteed and secured to all the people of India justice, social, economic and political: equality of status, of opportunity and before the law; freedom of thought, expression, belief, faith, worship, vocation, association and action, subject to law and public morality; and
(d) Wherein adequate safeguards shall be provided for minorities, backward and tribal areas and depressed and Other Backward Classes; and ......
The Objective Resolution gave expression to the ideals and aspirations of the people of India. It embodies the broad objectives which the Constituent Assembly was to set before itself. India was to be an Independent Sovereign Republic consisting of British India and the Princely States.Q.2. Discuss the main sources of the Indian Constitution.Ans. The new Constitution of India, though ready by November 26, 1949, came into operation on January 26, 1950.
The following are the main sources of Indian Constitution:
(a) Government of India Act, 1935. The new Constitution derives a lot from the Government of India Act of 1935. Both in language and substances remarks Prof. Srinivasan, “It is a close copy of the Act 1935 .... Almost two-third of the Constitution owes its origin to this Act with modifications in the context of the new conditions attainable in the country.” Many Articles of the new Constitution have been borrowed from the Government of India Act, 1935. As many as 250 Articles, word for word or with a little modification, from the Act of 1935 have been inducted into the new Constitution. Some of the Articles of the Constitution clearly lay down that till the Parliament enacts a new law, the old rules under the Act of 1935 will continue in force.
(b) Other Constitutions. The Indian Constitution has drawn extensively from the major constitutions of the world. The framers of the Indian Constitution have drawn freely many good things from the Constitutions of England, America, Australia, Canada, Germany, South Africa and Ireland. 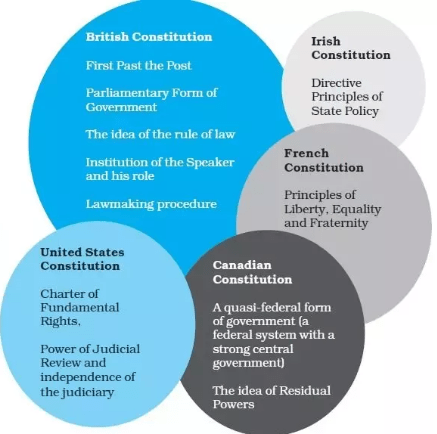 From Irish Constitution following are drawn
(i) Directive Principles of State Policy.
(ii) Some members of the Rajya Sabha are nominated.

(viii) Fundamental Rights. Part III of the Indian Constitution deals with the fundamental rights of the people.
Such as:-

(xi) Independent Judiciary. An independent judiciary is essential not only for the protection of the fundamental rights of the people, but is equally essential in a Federal Government.

(xv) Rule of Law. Another distinctive feature of the Indian Constitution is the Rule of Law. It means that, in India, law is supreme and it is the law which rules over the people.

(xvi) Adult Franchise. Before the inauguration of the new Constitution, the Franchise, under the Act of 1935, was very limited. The new Constitution provides for universal adult suffrage. Every Indian citizen of 18 years or above has the right to vote.

(xviii) Untouchability Abolished. Another important feature of the Constitution is the abolition of Untouchability which the Congress for years had been trying to achieve through public enlightenment.

(xx) Recognition of Hindi as an Official Language. The Constitution recognises Hindi as the official language of the Indian Union. The Constitution also recognises twenty-two other Indian languages as regional languages.(Mention any 6 point if the question is of 6 mark. And so is the case with question of 4 or 5 mark.)Q.5. Examine the significance of the preamble to the Indian Constitution.Ans. Preamble of Indian Constitution has a special significances as follows:-(a) The preamble expressed clearly that people are the ultimate source of authority.(b) The preamble emphasised the fact that India is a sovereign, socialist, democratic republic.(c) The preamble assures that the people of India Justice, Social, Economic and Political.(d) The  preamble is the mirror of the constitution and is a jewel set in the constitution.(e) It enables the people to assess and evaluate the performance of the government in the light of the objectives laid down in the constitution.Q.6. Why the Indian Constitution was enforced on 26th January, 1950?Ans. On December, 31, 1929 the congress passed a resolution of complete independence at the Lahore session and decided to celebrate every 26th January as Independence day. On January 26, 1930 our flag was hoisted on the bank of the river Ravi and this trend continued of celebrating Independence day on 26 January until we got it on 15 August 1947. To remember the day, the entire struggle, the makers of Indian constitution had chosen 26 January, 1950 to enforce the constitution even when it was ready on 26 of November 1949.Q.7. Are Constitution static? Give arguments in favour of your answer.Ans. Constitutions are not static. Constitutions change with the change of time and circumstances. Sometimes nations rewrite the entire constitutions. The USSR had four constitutions in its life of 74 years. France had numerous constitution in the last two centuries and so is the case with many other countries like Belgium. Indian Constitution had 101 amendments till the time. So all these data projects the scenario about the constitution as a living document and not the static one.