Q. 3. How is the population density closely related to the physical and socio-economic factors?Ans. Population density is closely related to physical and socio-economic factors. Dense population in UP, West Bengal, Bihar, Punjab, Haryana, Kerala is due to flat and fertile plains, favourable climate, water availability and socio-economic factors. Sparse population of Jammu & Kashmir, Himachal Pradesh, Arunachal Pradesh, Sikkim, North-Eastern States is due to hilly terrain, dense forests and harsh climate. Rajasthan has water shortage and its hot and dry climate accounts for low population density. Moderate density is seen in Odisha, Assam, Gujarat, Andhra Pradesh, Tamil Nadu, etc. due to possibilities of agriculture, industrial development and favourable climate to some extent. Mediterranean regions were inhabited from early periods in history due to their pleasant climate. Favourable factors for transport network, industrialization, urbanization in Maharashtra, Goa, Delhi NCR, etc. account for high population density. The Kobe-Osaka region of Japan is thickly populated because of the presence of a number of industries .Q. 4. Explain with examples any five factors that affect the population distribution across the world.ORDiscuss the factors influencing the distribution and density of population in the world.Ans. The major factors that affect human population distribution are :(i) Physical factors (ii) Agriculture (iii) Fresh water (iv) Climate (v) Availability of power (vi) Access to other communitiesFurthermore various physical and natural factors that affect the distribution of population across the world are : 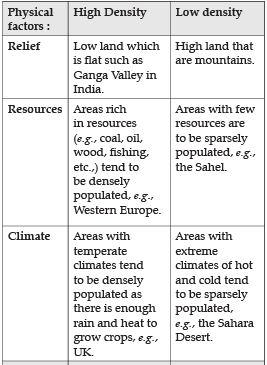 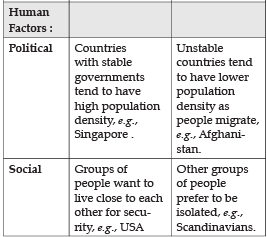