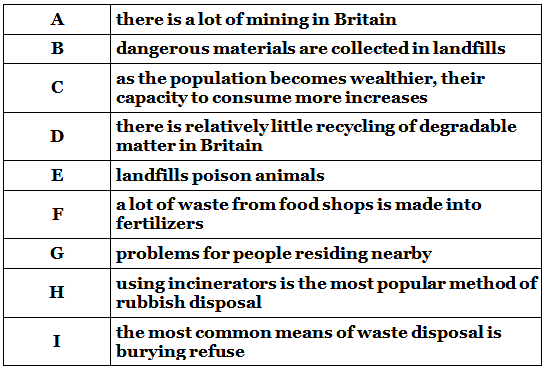 Questions 5 and 6: Choose the correct letter, a, b, c, or d.Q.5. Landfills are not approved of because(a) they use agricultural land.(b) they have always been expensive to run.(c) they need to have a license.(d) they produce dangerous emissions.Q.6. A tax was imposed in order(a) to encourage recycling.(b) to dissuade people from using landfills.(c) to punish the building industry.(d) to gather money for the government.

B - to dissuade people from using landfills.

Solutions to the problem of how to dispose of excess rubbish must be found. With the dramatic increase in both (7) (domestic) and industrial rubbish, the (8) (government) must devise new policies to deal with the matter. The well established (9) (landfills) are now considered (10) (outmoded) so it is preferable to send the refuse to (11) (reprocessing) works in order to (12) (degrade) the waste products which could then be used to manufacture (13) (recycled) goods. Also, the general public must be better informed of the worrying environmental (14) (consequences) the planet faces if this matter is not addressed urgently.