The document Matrices & Determinants IIT JAM Notes | EduRev is a part of the IIT JAM Course IIT JAM Mathematics.
All you need of IIT JAM at this link: IIT JAM

A matrix A over a field K or, simply, a matrix A (when K is implicit) is a rectangular array of scalars usually presented in the following form:

Note that the element aij, called the ij-entry or ij-element, appears in now i and column j.We frequently denote such a matrix by simply writing A = [aij].

A matrix with m rows and n columns is called an m by n matrix, written m * n. The pair of numbers m and n is called the size of the matrix. Two matrices A and B are equal, written A = B, if they have the same size and if corresponding elements are equal. Thus the equality of two m * n matrices is equivalent to a system of mn equalities, one for each corresponding pair of elements.

➤ Matrix Addition and Scalar MultiplicationLet A = [ aij and B = [bij] be two matrices with the same size , say m * n matrices. The sum of A and B, written A + B, is the matrix obtained by adding corresponding elements from A and B. That is,

The product of the matrix A by a scalar k, written k • A or simply kA, is the matrix obtained by multiplying each element of A by k. That is,

The matrix 2A - 3B is called a linear combination of A and B.Basic properties of matrices under the operations of matrix addition and scalar multiplication follows.

➤ Matrix MultiplicationThe product of matrices A and B, written AB, is somewhat complicated. For this reason, we first begin with a special case.The product AB of a row matrix A = [aj and a column matrix B = [b] with the same number of elements is defined to be the scalar (or 1 * 1 matrix) obtained by multiplying corresponding entries and adding; that is,

We emphasize that AB is a scalar (or a 1 x 1 matrix). The product AB is not defined when A and B have different numbers of elements.Example:

➤ DefinitionSuppose A = [aik] and B = [bkj] are matrices such that the number of columns of A is equal to the number of rows of B; say, A is an m * p matrix and B is a p * n matrix. Then the product AB is the m x n matrix whose ij-entry is obtained by multiplying the ith row of A by the jth column of B. That is,

➤ Transpose of a Matrix

The transpose of a matrix A, written AT, is the matrix obtained by writing the columns of A, in order, as rows. For example,

Example: The following are square matrices of order 3.

The following are also matrices of order 3:

➤ Identity Matrix, Scalar MatricesThe n-square identity or unit matrix, denoted by ln, or simply I, is the n-square matrix with 1’s on the diagonal and 0's elsewhere. The identity matrix I is similar to the scalar 1 in that, for any n-square matrix A,Al = IA = AMore generally, if B is an m x n matrix, then Bln = lmB = B.For any scalar k, the matrix kl that contains k’s on the diagonal and 0's elsewhere is called the scalar matrix corresponding to the scalar k. Observe that(kl)A = k(IA) = kAThat is, multiplying a matrix A by the scalar matrix kl is equivalent to multiplying A by the scalar k.

Example : The following are the identity matrices of orders 3 and 4 and the corresponding scalar matrices for k = 5;

Remark 1: It is common practice to omit blocks or patterns of 0's when there is no ambiguity, as in the above second and fourth matrices.Remark 2: The Kronecker delta function δij is defined by

Thus the identity matrix may be defined by I = [δij]

Thus A is a zero of the polynomial g(x).

➤ Equal MatricesTwo matrices are equal if

Minor of a Matrix Let A be a matrix square or rectangular, from it delete all rows leaving a certain t rows and all columns leaving a certain t columns. Now if t > 1 then the elements that are left, constitute a square matrix of order t and the determinant of this matrix is called a minor of A of order t.A single element of A may be consider as minor of order 1.

➤ Rank of a MatrixA number r is said to be the rank of a matrix A if it possesses the following two properties.

Rank of a matrix is the order of the highest non-vanishing minor of the matrix. From the above definition we have the following two useful results.

Example. Find the rank of the matrix

➤ Rank of a Matrix A = (aij)m*n by Reducing it to Normal Form.Every non zero matrix [say A = (aij)m*n] of rank r, by a sequence of elementary row (or column) transformations be reduced to the forms:

➤ Echelon Form of a MatrixA matrix A = (aij)m*n is said to be in ECHELON FORM, if

Example. Determine the rank of the matrix, by E-transformations.

(vanishes) while the second order minor

so the rank of the matrix is 2.

Inverse of a Matrix

Note: The matrix B = A-1 will also be a square matrix of the same order as A.

➤ Theorems on Inverse of a matrix Theorem. Every invertible matrix possesses a unique inverse.

This is also known as Gauss-Jorden reduction method for finding inverse of a matrix.

Example. Find the inverse of the matrix

➤ Inverse of a Matrix (another form)

The inverse of A is given by

The necessary and sufficient condition for the existence of the inverse of a square matrix A is that IAI ≠ 0, i.e. matrix should be non-singular.

Properties of inverse matrix:If A and B are invertible matrices of the same order, then

Note: In a determinant of order 3 there are 3 rows and 3 columns and its value can be found by expanding it along any of its rows of along any of its columns. In these expansions the element a., is multiplied by (-1)i+j to fix the sign of aij.

General rule. One should always try to bring in as many zeros as possible in any row (column) and then expand the determinant with respect to that row (column)Thus

If we omit the row and the column passing through the element aij, then the second order determinant so obtained is called the minor of the element aij and is denote by Mij.Therefore

are the minors of the elements a21 and a32 respectively.

Cofactors: The minor Mij multiplied by (-1)i+j is called the cofactor of the element aij. Cofactor of aij =Aij = (-1)i+j Aij.

Factor theorem. If the elements of a determinant Δ are functions of x and two parallel lines become identical when x = a, then x - a is a factor of Δ.

The document Matrices & Determinants IIT JAM Notes | EduRev is a part of the IIT JAM Course IIT JAM Mathematics.
All you need of IIT JAM at this link: IIT JAM
All Tests, Videos & Notes of IIT JAM: IIT JAM 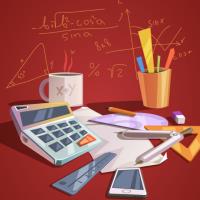