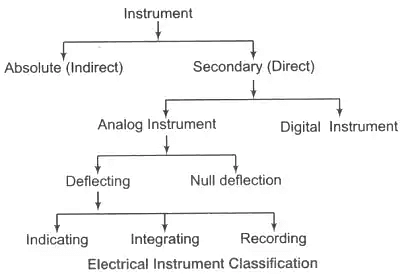 1. Absolute Instrument: It gives the value of the parameters under measurement in terms of the instrument.e.g., Tangent galvanometer, Rayleigh's current balance.

Principle of Operation of Analog Instrument

There are two types of the mechanism is considered here. First one is spring control and the other one is gravity control mechanism as given below. 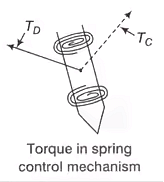 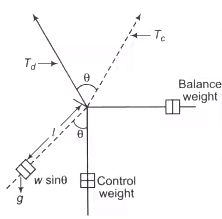 Measuring Current: AmmetersFor measurement of current, the circuit should be broken at the point where we want that current is to be measured, and the ammeter inserted at that point. An ammeter must be connected in series with the load under test.

As it is important that the insertion of the ammeter into a network has small effect the circuit’s existing resistance and, thus alter the current normally flowing in the circuit, ammeters are manufactured with very small values of internal resistance.Because ammeters have a very small internal resistance, it is vitally important that they are never  connected in parallel with any circuit component —and particularly with the supply. It will result in a short-circuit current flowing through the instrument which may damage the ammeter.

Ammeters have a very low internal resistance, and must always be connected in series in a ciruit

Measuring Voltage: VoltmetersTo measure potential-difference or voltage, a voltmeter should be connected between two points at different potentials. So, a voltmeter must always be connected in parallel with the part of the network under test. 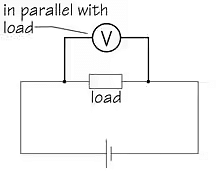 In order to operate, a voltmeter must, of course, draw some current from the circuit under test, and this can lead to inaccurate results because it can interfere with the normal condition of the circuit. We call this the ‘loading effect’ and, to minimise this ‘loading effect’ (and, therefore, improve the accuracy of a reading), this operating current must be as small as possible and, for this reason, voltmeters are manufactured with a very high value of internal resistance —usually many megohms.

Voltmeters must always be connected in parallel in a circuit, and have a very high internal resistance.

Types of Instruments used for Ammeter and Voltmeter 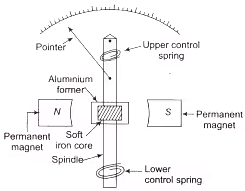 Effect of Temperature Change in Ammeter ReadingAs temperature increases the resistance of copper increases and this result into a change of reading of the instrument. To reduce the effect of temperature a resistance having very small temperature coefficient made up of Magnin is connected in series with the coil and this is known as swamping resistance.