On-the basis of obtained expressions plots x(t) , vx(t) and wx(t) can be drawn as shown in the answersheet, (of the problem book ).

Ans. 2. (a) From the motion law of the particle

Now compairing this equation with the general equation of harmonic oscillations : X - A sin(ωot+a) Amplitude, A = a/2 and angular frequency, ω0 - 2ω.

Thus the period of one full oscillation,

Plot of vx (x) is as shown in the answersheet.

Q. 3.A particle performs harmonic oscillations along the x axis about the equilibrium position x = 0. The oscillation frequency is  ω = 4.00 s-1 . At a certain moment of time the particle has a coor- dinate xo  = 25.0 cm and its velocity is equal to vx0  = 100 cm/s. Find the coordinate x and the velocity vx of the particle t = 2.40s after that moment.

Putting all the given numerical values, we get :

Q. 4.Find the angular frequency and the amplitude of harmonic oscillations of a particle if at distances x1  and x2  from the equilibrium position its velocity equals v1 a nd v2  respectively.

Ans.  From the Eqn

Solving these Eqns simultaneously, we get

Q. 5. A point performs harmonic oscillations along a straight line with a period T = 0.60 s and an amplitude a = 10.0 cm. Find the mean velocity of the point averaged over the time interval during which it travels a distance a/2, starting from (a) the extreme position; (b) the equilibrium position.

(However x is the displacement from the equlibrium position)

(b) In this case, it is easier to write the motion law in the form :

Differentiating Eqn (2) w.r.t time, we get

(b) In accordance with the problem

Using ω = 2 ω/T , and on evaluating the integral we get

Q. 7. A particle moves along the x axis according to the law x = a cos ωt. Find the distance that the particle covers during the time interval from t = 0 to t.

Ans. From the motion law, x = a cos ωt„ it is obvious that the time taken to cover the distance equal to the amplitude (a), starting from extreme position equals T/4.Now one can write

x = x a sin ωt, if the t is counted from nT/4 and the distance covered in the time interval to be comes

Thus the sought distance covered for odd n is

Hence the sought distance for n is even

Q. 8. At the moment t = 0 a particle starts moving along the x axis so that its velocity projection varies as vx  = 35 cos πt cm/s, where t is expressed in seconds. Find the distance that this particle covers during t = 2.80 s after the start.

Now we can write

As n = 5 is odd, like (4 = 7), we have to basically find the distance covered by the particle starting from the extreme position in the time interval 0 = 3 s.Thus from the Eqn.

Ans.  As the motion is periodic the particle repeatedly passes through any given region in the range - a ≤ x ≤ a.

The probability that it lies in the range (x, x + dx) is defined as the fraction

where Δt is the time that the particle lies in the range (x, x + dx) out of the total time t. Because of periodicity this is

where the factor 2 is needed to take account of the fact that the particle is in the range ( x , x + d x ) during both up and down phases of its motion. Now in a harmonic oscillator.

Ans.  (a) We take a graph paper and choose an axis (X - axis) and an origin. Draw a vector of magnitude 3 inclined at an angle π/3 with the X -axis. Draw another vector of magnitude 8 inclined at an angle - π/3( Since sin (ωt+ π/ 6 ) » cos (ωt- π/ 3 )) with the X - axis. The magnitude of the resultant of both these vectors (drawn from the origin) obtained using parallelogram law is the resultant, amplitude. 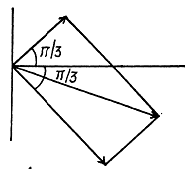 (b) One can follow the same graphical method here but the result can be obtained more quickly by breaking into sines and cosines and adding :Resultant

So,   A = 6-985  = 7 unitsNote- In using graphical method convert all oscillations to either sines or cosines but do not use both.