Major aim of irrigation systems is to help out in the growing of agricultural crops and vegetation by maintaining with the minimum amount of water required, maintenance of landscapes and re-vegetation of disturbed soils. Irrigation systems are also used for dust repression, removal of sewage, and in mining.On the contrary, agriculture that relies only on direct rainfall is referred to as rain-fed or dry-land farming.

Techniques of IrrigationIn India, the irrigated area consists of about 36 percent of the net sown area. There are various techniques of irrigation practices in different parts of India. These methods of irrigation differ in how the water obtained from the source is distributed within the field. In general, the goal of irrigation is to supply the entire field homogeneously with water, so that each plant has the amount of water it needs, neither too much nor too little. Irrigation in India is done through wells, tanks, canals, perennial canal, and multi-purpose river valley projects.

If the surface irrigation method is perfectly selected, it fulfils following requirements:

Surface irrigation technique is broadly classified as1. Basin irrigation: Basin irrigation is common practice of surface irrigation. If a field is level in all directions, is encompassed by a dyke to prevent runoff, and provides an undirected flow of water onto the field, it is herein called a basin. It may be furrowed or ridged, have raised beds for the benefit of certain crops, but as long as the inflow is undirected and uncontrolled into these field modifications, it remains a basin. 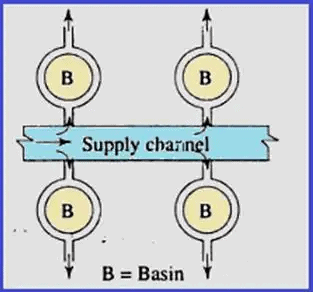 2. Furrow irrigation: In furrow irrigation technique, trenches or “furrows” are dug between crop rows in a field. Farmers flow water down the furrows (often using only gravity) and it seeps vertically and horizontally to refill the soil reservoir. Flow to each furrow is individually controlled. Furrow irrigation is suitable for row crops, tree crops and because water does not directly contact the plants, crops that would be damaged by direct inundation by water such as tomatoes, vegetables, potatoes and beans. It is one of the oldest system of irrigation. It is economical and low-tech making it particularly attractive in the developing world or places where mechanized spray irrigation is unavailable or impractical.In different situations, different furrow methods are used (Surajbhan 1978). They are mainly of five types:

There are numerous advantages of Furrow technique of irrigation:

Major drawback of furrow system of irrigation is ensuring uniform dispersal of water over a given field. To tackle this problem, some farmers engage in field levelling to remove any small hills that would have been bypassed by the gravity flow of the water. Other problem with furrow irrigation is the increased potential for water loss due to runoff. Building retention ponds along the edges of fields can help capture this runoff, allowing it to be pumped back to the upslope side of the field for use in further irrigation cycles.

3. Border Strip Method: In this technique of irrigation, a field is divided into number of strips. The width of strip varies from 10 to 15 metres and length varies from 90 m to 400 m. Strips are separated by low embankments or levees. The water is diverted from the field channel into the strips. The water flows gradually towards lower end, wetting the soil as it advances. The surface between two embankments should essentially be level. It assists in covering the entire width of the strip. There is a general surface slope from opening to the lower end. The surface slope from 2 to 4 m/1000 m is best suited. When the slope is steeper, special arrangement is made to prevent erosion of soil. 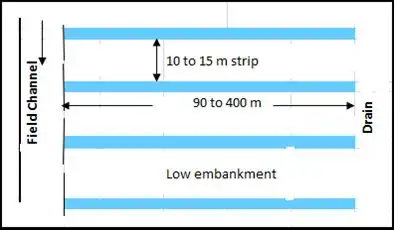 Classification Based on Availability of Water

2. Tank Irrigation Tanks on local streams form a significant source of irrigation especially in the peninsula area in the States of Karnataka, Maharashtra and Tamil Nadu. Tank irrigation belongs to category of storage irrigation. Tanks are small sized reservoirs formed by small earthen embankments to store runoff for irrigation. The site is selected within a watershed protected by vegetation and containing minimum of cultivated land so as to ensure minimum rate of sedimentation which lowers its storage capacity. Adequate soil conservation measures are essentially adopted to ensured quantity and quality of water inflow into the tank.The essential components of irrigation that are tank embankment, surplus or escape weir, and outlet sluice. A suitable breaching section also sometimes provided to ensure that the tank embankment is not overtopped in the event excessive discharge from the catchment. The breaching section is a low level embankment of certain length designed to have a localized breach to escape excessive inflow.

3. Lift Irrigation In lift irrigation water is lifted from a river or a canal to the bank to irrigate the land which are not commanded by gravity flow. Lift irrigation is being increasingly practiced in India. Every State such areas exist where irrigation can be extended only by lift canals. Lift irrigation also includes tube well irrigation but the latter is not feasible in areas where scarcity of water exists, climate is dry and groundwater is low, i.e., groundwater is in insufficient quantity and unsuitable quality. Lift canal then constitutes the only means of extension of irrigation to sound perched lands. A lift canal can cater for much larger areas than a tube well and is suitable when supplies either from a river or a canal are available for lifting to higher elevation.Lift area is defined as the area the level of which is too high to permit irrigation by gravity flow from the source, but which can be irrigated by lifting water to the necessary level by means of pump Gross lift area is the portion of gross irrigable area which can be irrigated only by pumping.In lift Irrigation mechanical devices like pumps, or electric motors and pumps are required to be installed for lifting water. Electrical pumps are generally provided for lifting water. Diesel pumping sets are also installed as standby.

5. Sprinkler SystemsIn the sprinkler irrigation network, we have the mains and the subdomains, through which water under pressure is made to flow. Revolving sprinkler heads are then usually mounted on rising pipes attached to the laterals. The water jet comes out through the revolving sprinkler heads, with force. When sprinkler heads are not provided, perforations are made in the pipes, and they are provided with nozzles, through which water jets out and falls on the ground. Generally, such a perforated pipe system operates at low heads; whereas, the revolving heads sprinklers operate on high as well as low heads, depending upon the type of rotary head used.

6. Drip irrigation MethodDrip irrigation, also called trickle irrigation, is the latest field irrigation technique and is meant for adoption at places where there exists acute scarcity of irrigation water and other salt problems. In this method, water is slowly and directly applied to the root zone of the plants, thereby minimizing the losses by evaporation and percolation.This system involves laying a system of the head, mains, sub mains, laterals, and drop nozzles. Water oozes out of these small drip nozzles uniformly and at a very small rate, directly into the plant roots area.The head consists of a pump to lift water, so as to produce the desired pressure of about 2.5 atmospheres, for ensuring proper flow of water through the system. The lifted irrigation water is passed through a fertilizer tank, so as to mix the fertilizer directly in the irrigation water, and then through a filter, so as to remove the suspended particles from the water, to avoid clogging of drip nozzles.