The document Microprocessor - Digital Electronics, Electronics, and Experimental Methods Physics Notes | EduRev is a part of the Physics Course Physics for IIT JAM, UGC - NET, CSIR NET.
All you need of Physics at this link: Physics

The term microprocessor typically refers to the central processing unit (CPU) of a microcomputer, containing the arithmetic logic unit (ALU) and the control units. It is typically implemented on a single LSI chip. This separates the "brains" of the operation from the other units of the computer.

An example of microprocessor architecture. 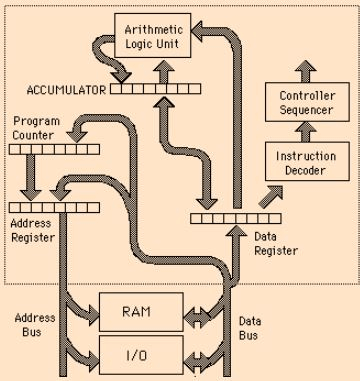 The microprocessor contains the arithmetic logic unit (ALU) and the control unit for a microcomputer. It is connected to memory and I/O by buses which carry information between the units. 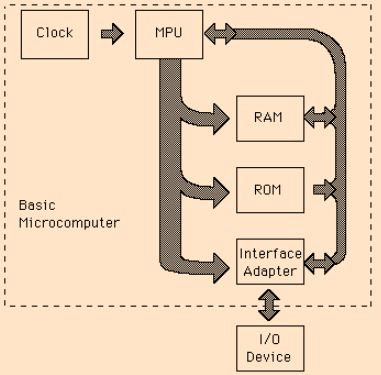 Typical microcomputers employ a microprocessor unit (MPU), a clock, and interfaces to memory and external input/output devices. The units are connected by buseswhich transfer information between them.

Buses: The exchange of information.

Information is transferred between units of the microcomputer by collections of conductors called buses.

There will be one conductor for each bit of information to be passed, e.g., 16 lines for a 16 bit address bus. There will be address, control, and data buses. 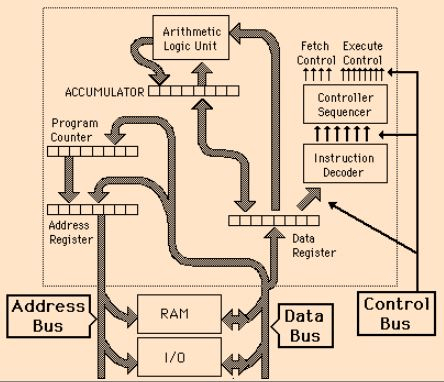 All the arithmetic operations of a microprocessor take place in the arithmetic logic unit (ALU). Using a combination of gates and flip-flops, numbers can be added in less than a microsecond, even in small personal computers. The operation to be performed is specified by signals from the control unit. The data upon which operations are performed can come from memory or an external input. The data may be combined in some way with the contents of the accumulator and the results are typically placed in the accumulator. From there they may be transferred to memory or to an output unit.

The accumulator is the principal register of the arithmetic logic unit of a microprocessor. Registers are sets of flip-flops which can hold data. The accumulator typically holds the first piece of data for a calculation. If a number from memory is added to that date, the sum replaces the original data in the accumulator. It is the repository for successive results of arithmetic operations, which may then be transferred to memory, to an output device, etc.