It is electrostatic force of attraction between two oppositively charged ions.Ion is formed from neutral atom by gain or loss of electrons.

(a) Conditions for the formation of Ionic Compound:

(b) General properties of Ionic compounds.

At room temperature ionic compuonds exist either in solid state or in solution phase but not in gaseous state.

Simple ionic compounds do not show isomerism but isomorphism is their important characteristic.Isomorphism means similar crystal structure. All alums show isomorphism because they have same general formula :

Ionic solids are almost non-conductors. However conduct a very little amount of current due to crystal defects. All ionic solids are good conductors in molten state as well as in their aqeuous solutions because their ions are free to move.

Lattice energy of a crystal is the energy released when one mole of ionic crystal is formed from gaseous ions (cations and anions).

Born Haber Cylce : Born Hable cycle is based on Hess’ law according to which the net energy change in a chemical reaction is independent of the path or the reaction and in a cyclic process, the total energy change is zero. This cycle relates the lattice energy of a crystal to other thermochemical data of energy terms involved in building a crystal lattice.The elements in their standard state are first converted to gaseous atoms and then to ions and finally packed into the crystal lattice.The enthalpies of sublimation and dissociation and the ionization energy are positive since energy is supplied to the system. The electron affnity and lattice energy are negative since energy is evolved in these processes.The enthalpy of formation of (ΔHf) is the algebraic sum of the terms going round the cycle. 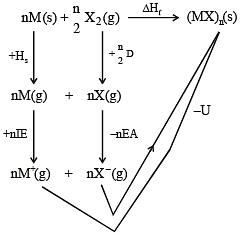 U = Lattice enrgy of crystal (MX)n(S)

Factors affecting formation of ionic crystal : It is favoured by 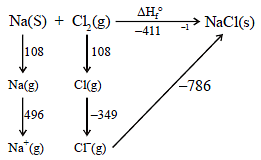 Lattice energy, U, is the characteristic property of ionic crystals. It can be thoretically calculated by Born equation and depends upon ionic charge, ionic radii, crystal structure and electronic configuration of ions.

In an ionic crystal at least two forces are operating.(i) the electrostatic attractive force (or attractive potential energy) acting between the oppositely charged ions and

The lattice energy of a crystal may be defined at the decrease in energy that takes place in the process of bringing the ions from an infinite distance to their equilibrium position in the stable lattice. In other words the lattice energy of an ionic crystal M+ X– may be defined as the energy released when the correct number of gaseous cations M+ and anions X– are brought together from an infinite distance to form one gram mole of the solid crystal.

Lattice energy is defined as the energy required to remove ions of one gm mole of a solid ionic crystal from their equilibrium position in the crystal to infinity.

M+X– (x) (inic crystal) + Energy required → M+(g) + X- (g) · The lattice energy of an ionic crystal is determined by colombic interaction between all its ions attractive forces acting between the ions of opposite charges and repulsive forces which result from the interpenetration of their outermost electron clouds.

Here z+ e and z– e = charges on the cation and anion, e = charge on the electron, z+ and z– =positive integersand r = distance between the cation and the anion.As the ions come very close to each other, they repel one another because of interpenetration oftheir electron clouds.The repulsive force [or repulsion energy, (PE)repulsion] is given by :

where n and b are called Born exponent and repulsion coefficient respectively.When the ions are brought together from an infinite distance the total potential energy (PE)total isgiven by

(PE)total = (PE)attraction + (PE)repulsionSo, the lattice energy, U, defined as the energy released in the formation of a mole of an ionic crystal from the gaseous ions which are at infinite distance from each other. Thus if N is the Avogadro’s number, then by definition.

(iii) The lattice energy varies inversely as the inter-nuclear distance, r0 between the oppositely chargedions in an ionic crystal.