New Agriculture in Oregon, US

Questions 9-13: Do the following statements agree with the information given in Reading Passage 1? In boxes 9-13 on your answer sheet, write

Q.9. Integrated Pest Management has generally been regarded as a success in across the US.Q.10. Oregon farmers of apples and pears have been promoted as successful examples of Integrated Pest Management.Q.11. The IPPC uses scientists from different organisations globallyQ.12. Straw mulch experiments produced unplanned benefits.Q.13. The apple industry is now facing a lot of competition from abroad.

What Cook Books Really Teach Us

Questions 17-21: Reading Passage has nine paragraphs, A-I. Which paragraph contains the following information? Write the correct letter, A-I, in boxes 17-21 on your answer sheet.NB  You may use any letter more than once.Q.17. cookery books providing a sense of stability during periods of unrestQ.18. details in recipes being altered as they were passed onQ.19. knowledge which was in danger of disappearingQ.20. the negative effect on cookery books of a new developmentQ.21. a period when there was no need for cookery books to be precise

Questions 22-26: Look at the following statements (Questions 22-26) and list of books (A-E) below. Match each statement with the correct book. Write the correct letter, A-E, in boxes 22-26 on your answer sheetQ.22. Its recipes were easy to follow despite the writer’s attention to detail.Q.23. Its writer may have deliberately avoided passing on details.Q.24. It appealed to ambitious ideas people have about cooking.Q.25. Its writer used ideas from other books but added additional related information.Q.26. It put into print ideas which are still respected today.List of cookery booksA. De re coquinaraB. The Book of Household ManagementC. Le Guide CulinaireD. The Boston Cooking-School Cook BookE. Mediterranean Food

Learning lessons from the past

A - Many past societies collapsed or vanished, leaving behind monumental ruins such as those that the poet Shelley imagined in his sonnet, Ozymandias. By collapse, I mean a drastic decrease in human population size and/or political/economic/social complexity, over a considerable, for an extended time. By those standards, most people would consider the following past societies to have been famous victims of full-fledged collapses rather than of just minor declines: the Anasazi and Cahokia within the boundaries of the modem US, the Maya cities in Central American, Moche and Tiwanaku societies in South America, Norse Greenland, Mycenean Greece and Minoan Crete in Europe, Great Zimbabwe in Africa, Angkor Wat and the Harappan Indus Valley cities in Asia, and Easter Island in the Pacific Ocean.B - The monumental ruins left behind by those past societies hold a fascination for all of us. We marvel at them when as children we first learn of them through pictures. When we grow up, many of us plan vacations in order to experience them at first hand. We feel drawn to their often spectacular and haunting beauty, and also to the mysteries that they pose. The scales of the ruins testify to the former wealth and power of their builders. Yet these builders vanished, abandoning the great structures that they had created at such effort. How could a society that was once so mighty end up collapsing?C - It has long been suspected that many of those mysterious abandonments were at least partly triggered by ecological problems: people inadvertently destroying the environmental resources on which their societies depended. This suspicion of unintended ecological suicide (ecocide) has been confirmed by discoveries made in recent decades by archaeologists, climatologists, historians, palaeontologists, and palynologists (pollen scientists). The processes through which past societies have undermined themselves by damaging their environments fall into eight categories, whose relative importance differs from case to case: deforestation and habitat destruction, soil problems, water management problems, overhunting, overfishing, effects of introduced species on native species, human population growth, and increased impact of people.D - Those past collapses tended to follow somewhat similar courses constituting variations on a theme. Writers find it tempting to draw analogies between the course of human societies and the course of individual human lives – to talk of a society’s birth, growth, peak, old age and eventual death. But that metaphor proves erroneous for many past societies: they declined rapidly after reaching peak numbers and power, and those rapid declines must have come as a surprise and shock to their citizens. Obviously, too, this trajectory is not one that all past societies followed unvaryingly to completion: different societies collapsed to different degrees and in somewhat different ways, while many societies did not collapse at all.E - Today many people feel that environmental problems overshadow all the other threats to global civilisation. These environmental problems include the same eight that undermined past societies, plus four new ones: human-caused climate change, the build-up of toxic chemicals in the environment, energy shortages, and full human utilisation of the Earth’s photosynthetic capacity. But the seriousness of these current environmental problems is vigorously debated. Are the risks greatly exaggerated, or conversely are they underestimated? Will modem technology solve our problems, or is it creating new problems faster than it solves old ones? When we deplete one resource (eg wood, oil, or ocean fish), can we count on being able to substitute some new resource (eg plastics, wind and solar energy, or farmed fish)? Isn’t the rate of human population growth declining, such that we’re already on course for the world’s population to level off at home manageable number of people?F - Questions like this illustrate why those famous collapses of past civilisations have taken on more meaning than just that of a romantic mystery. Perhaps there are some practical lessons that we could learn from all those past collapses. But there are also differences between the modem world and its problems, and those past societies and their problems. We shouldn’t be so naive as to think that the study of the past will yield simple solutions, directly transferable to our societies today. We differ from past societies in some respects that put us at lower risk than them; some of those respects often mentioned include our powerful technology (ie its beneficial effects), globalisation, modem medicine, and greater knowledge of past societies and of distant modem societies. We also differ from past societies in some respects that put us at greater risk than them: again, our potent technology (ie its unintended destructive effects), globalisation (such that now a problem in one part of the world affects all the rest), the dependence of millions of us on modern medicine for our survival, and our much larger human population. Perhaps we can still learn from the past, but only if we think carefully about its lessons.Questions 27-29: Choose the correct letter A, B, C or D.Q.27. When the writer describes the impact of monumental ruins today, he emphasizesA. the income they generate from tourism.B. the area of land they occupy.C. their archaeological value.D. their romantic appeal.Q.28. Recent findings concerning vanished civilisationsA. have overturned long-held beliefs.B. caused controversy amongst scientists.C. come from a variety of disciplines.D. identified one main cause of environmental damage.Q.29. What does the writer say about ways in which former societies collapsed?A. The pace of decline was usually similar.B. The likelihood of collapse would have been foreseeable.C. Deterioration invariably led to total collapse.D. Individual citizens could sometimes influence the course of events.

Questions 30-34: Do the following statements agree with the views of the writer in Reading Passage? Write

Q.30. It is widely believed that environmental problems represent the main danger faced by the modern world.Q.31. The accumulation of poisonous substances is a relatively modern problem.Q.32. There is general agreement that the threats posed by environmental problems are very serious.Q.33. Some past societies resembled present-day societies more closely than others.Q.34. We should be careful when drawing comparisons between past and present.

Questions 35-39: Complete each sentence with the correct ending, A-F, below. Write the correct letter, A-FQ.35. Evidence of the greatness of some former civilisationsQ.36. The parallel between an individual’s life and the life of a societyQ.37. The number of environmental problems that societies faceQ.38. The power of technologyQ.39. A consideration of historical events and trends A. is not necessarily valid.B. provides grounds for an optimistic outlook.C. exists in the form of physical structures.D. is potentially both positive and negative.E.  will not provide direct solutions for present problems.F. is greater now than in the past.Question 40: Choose the correct letter A, B, D or DQ.40. What is the main argument of Reading Passage 3?A. There are differences as well as similarities between past and present societies.B. More should be done to preserve the physical remains of earlies civilisations.C. Some historical accounts of great civilisations are inaccurate.D. Modern societies are dependent on each other for their continuing survival. 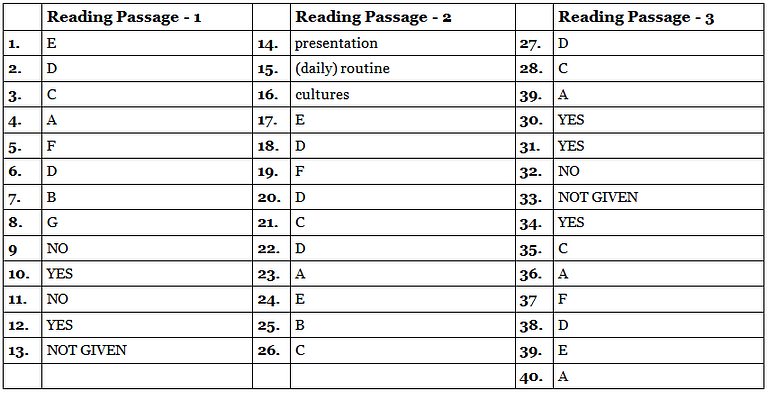