(b) As the particle did not return back distance travelled in 12 s= Displacement at 12 s∴ Average speed = 8 m/s.

Speed (v) of particle = 1 m/s∴ Distance moved by particle in 2 s = 2 mThus, angle through which the particle moved

(b) Magnitude of average acceleration

In the given time interval, find: (a) average velocity, (b) average acceleration and (c) from the given data, can you find average speed?Ans: 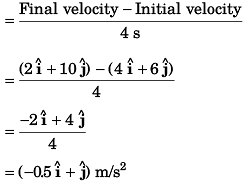 (c) We cannot find the average speed as the actual path followed by the particle is not known.

Ques 8: Two diamonds begin a free fall from rest from the same height, 1.0 s apart. How long after the first diamond begins to fall will the two diamonds be 10 m apart? Take g = 10 m/s2.Ans: 1.5 sSol: If at time t the vertical displacement between A  and B is 10 m

Ques 10: A stone is dropped from the top of a tower. When it crosses a point 5 m below the top, another stone is let fall from a point 25 m below the top. Both stones reach the bottom of the tower simultaneously. Find the height of the tower. Take g = 10 m/s2.Ans: 45 m 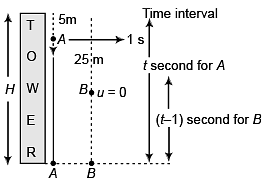 [Substituting value of H from Eq. (i)]

Ques 11: A point mass starts moving in a straight line with constant acceleration. After time t0 the acceleration changes its sign, remaining the same in magnitude. Determine the time t from the beginning of motion in which the point mass returns to the initial position.Ans: (3.414) t0Sol: 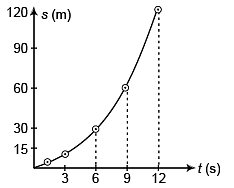 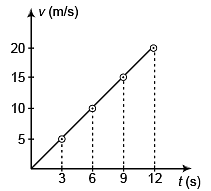 Ques 14: A train stopping at two stations 4 km apart takes 4 min on the journey from one of the station to the other. Assuming that it first accelerates with a uniform acceleration x and then that of uniform retardation y, prove that

(b) Two or three dimensional motion 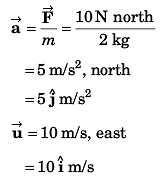 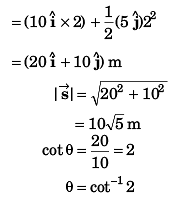 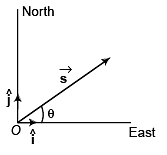 Ques 17: At time t = 0, a particle is at (2m, 4m). It starts moving towards positive x-axis with constant acceleration 2 m/s2 (initial velocity = 0). After 2 s an acceleration of 4 m/s2 starts acting on the particle in negative y-direction also. Find after next 2 s:
(a) velocity and
(b) coordinates of particle.
Ans:

(b) Co-ordinate of particle

Ques 18: A particle moving in x-y plane is at origin at time t = 0. Velocity of the particle is

(b) Co-ordinates of the particle

Ques 19: A particle starts from the origin at t = 0 with a velocity of

Comparing the coefficients of

Ques 20: At time t = 0, the position vector of a particle moving in the x-y plane is