Ques 22:  The velocity of a particle moving in a straight line is decreasing at the rate of 3 m/s per metre of displacement at an instant when the velocity is 10 m/s. Determine the acceleration of the particle at this instant.Ans: - 30 ms-2Sol: 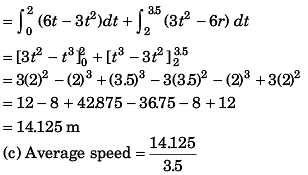 Substituting above found value of v in Eq.(i),

= 0.603 m/s2Ques 27: If the velocity v of a particle moving along a straight line decreases linearly with its displacement from 20 m/s to a value approaching zero at s = 30 m, determine the acceleration of the particle when s = 15 m.Ans: (- 20/3) ms-2Sol: According to question, the velocity of the particle varies as shown in figure.