Here, the magnetic force is directed towards the center of circular motion undergone by the object and acts as a centripetal force. Thus, if v and B are perpendicular to each other, the particle describes a circle. In other cases, when a component of velocity is present along the direction of the magnetic field B, then its magnitude remains unchanged throughout the motion, as no effect of a magnetic field is felt upon it. Also, the motion due to the perpendicular component of the velocity is circular in nature, as discussed above. The resulting motion due to the two components is a helical motion, as shown in the image below. 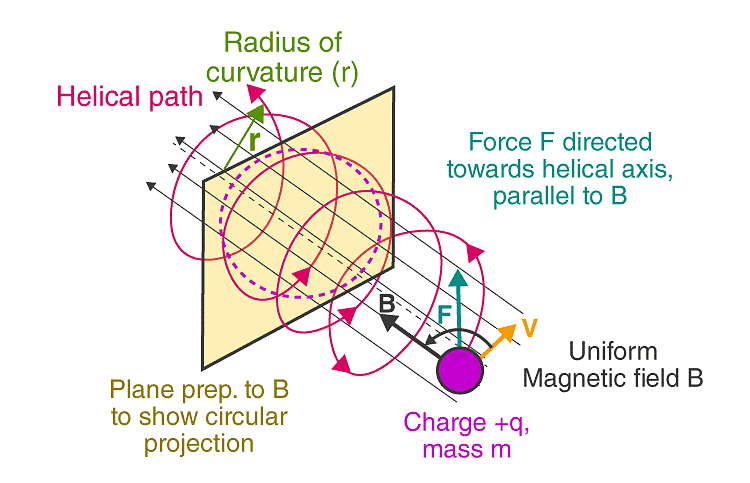 As the radius of the circular path of the particle is r, the centripetal force acting perpendicular to it towards the center can be given as,

Equating the two, we get,

Here, r gives the radius of the circle described by the particle. Also, if we write the angular frequency of the particle as ω, then we can write,

Here, v is the frequency of rotation of the particle. The time for one revolution can be given as,

The distance moved by the particle along the direction of the magnetic field in one rotation is given by its pitch.

Where vp is the velocity parallel to the magnetic field.

The document Motion in a Magnetic Field Notes | Study Physics Class 12 - NEET is a part of the NEET Course Physics Class 12.
All you need of NEET at this link: NEET
Join Course