Q.1. The angle between 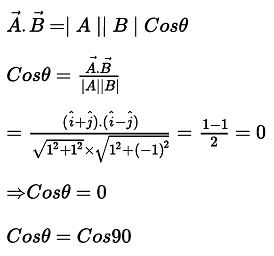 plane as shown in figure. If we draw orthogonal vectors

along x and y axes respectively, by law of vector addition,

Now as for any vector

is the direction of

along x- and y-axes respectively.Here it is worthy to note once a vector is resolved into its components, the components themselves can be used to specify the vector as:(1) The magnitude of the vector

is obtained by squaring and adding equations (ii) and (iii), i.e.

(2) The direction of the vector

is obtained by dividing equation (iii) by (ii), i.e.tan θ = (Ry/Rx) or θ = tan-1(Ry/Rx)In such type of problems we have to resolve the rectangular components according to the diagram.Clearly from the diagram

As u is in the first quadrant, hence both of its components a and b will be positive and as v is in fourth quadrant. For

as it is in positive x-direction and located downward hence x-component p will be positive and y-component q will be negative. 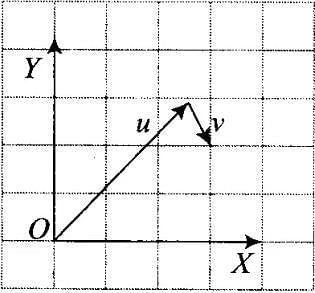 plane as shown in figure. If we draw orthogonal vectors

along x and y axes respectively, by law of vector addition, 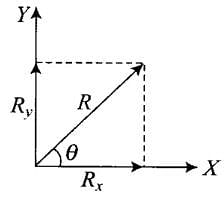 The magnitude of component of r along A-axis

Where, θ is the angle of projection, u is the initial velocity with which the projectile is fired, and g is the gravitational acceleration.

According to the problem the angle of projection, θ = 15° and horizontal range, R = 50 m By substituting the values in the above relation, we get

Q.6. Consider the quantities, pressure, power, energy, impulse, gravitational potential, electrical charge, temperature, area. Out of these, the only vector quantities are(a) Impulse, pressure and area(b) Impulse and area(c) Area and gravitational potential(d) Impulse and pressureAns. (b)Solution.We know that impulse J = F. ∆t = ∆p, where F is force, At is time duration and Ap is change in momentum. As ∆p is a vector quantity, hence impulse is also a vector quantity. Sometimes area can also be treated as vector direction of area vector is perpendicular to its plane.Q.7. In a two dimensional motion, instantaneous speed v0 is a positive constant. Then which of the following are necessarily true?(a) The average velocity is not zero at any time.(b) Average acceleration must always vanish.(c) Displacements in equal time intervals are equal.(d) Equal path lengths are traversed in equal intervals.Ans. (d)Solution.Speed (Instantaneous Speed): The magnitude of the velocity at any instant of time is known as Instantaneous Speed or simply speed at that instant of time. It is denoted by v.Quantitatively: Speed = distance/time

Mathematically, it is the time rate at which distance is being travelled by the particle.

Hence, Total distance travelled = Path length = (speed) x time taken Important point: We should be very careful with the fact that speed is related with total distance covered not with displacement.Q.8. In a two dimensional motion, instantaneous speed v0 is a positive constant. Then which of the following are necessarily true?(a) The acceleration of the particle is zero.(b) The acceleration of the particle is bounded.(c) The acceleration of the particle is necessarily in the plane of motion.(d) The particle must be undergoing a uniform circular motion.Ans. (c)Solution.This motion is two dimensional and given that instantaneous speed v0 is positive constant. Acceleration is defined as the rate of change of velocity (instantaneous speed), hence it will also be in the plane of motion.Q.9. Three vectors A,B and C add up to zero. Find which is false.(a) (A×B) × C is not zero unless B,C are parallel(b) (A×B).C is not zero unless B,C are parallel(c) If A,B,C define a plane, (A×B)×C is in that plane(d) (A×B).C=|A||B||C|→ C2 = A2 + B2Ans. (c)Solution.These types of problems can be solved by hit and trial method by picking up options one by oneSum of vectors is given as

Hence, we can say that A, B and C are in one plane and are represented by the three sides of a triangle taken in one order. Let us discuss all the options one by one.(a) We can write 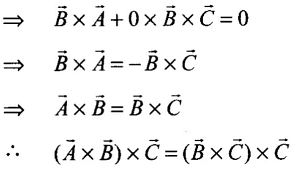 It cannot be zero.

then also the cross product in any manner will be zero. So, option (a) is not false.(b)

whatever be the positions of

and the direction of X is perpendicular to the plane containing

Its direction is in the plane of

By squaring both sides, we get

Hence, correct answer will be

so this option will be false.Q.11. Two particles are projected in air with speed vo at angles θ1 and θ2 (both acute) to the horizontal, respectively. If the height reached by the first particle is greater than that of the second, then tick the right choices(a) Angle of projection : q1 > q2(b) Time of flight : T1 > T2(c) Horizontal range : R1 > R2(d) Total energy : U1 > U2Ans. (a, b)Solution.Maximum height H of projectile 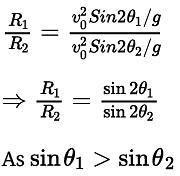 if m1 = m2 = m & as H1 > H2We know at the highest point the total energy is equal to the P.E.∴ PE1 > PE2 or U1 > U2So it does not verify option (d).Hence Option(a,b) is correct.Q.12. A particle slides down a frictionless parabolic(y = x2) track (A – B – C) starting from rest at point A (Fig.). Point B is at the vertex of parabola and point C is at a height less than that of point A. After C, the particle moves freely in air as a projectile. If the particle reaches highest point at P, then 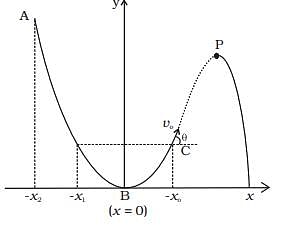 Ans. (a, c)Solution.When an object covers a displacement Δr in time Δt, its average velocity is given by

where r1 and r2 are position vectors corresponding to time t1, and t2.If the velocity of an object changes from v1 to v2 in time Δt, average acceleration is given by

But, when acceleration is non-uniform,

Option (c) is similar to the relation

which is not correct if initial velocity is given.So (b) and (d) are the correct relations for the uniform acceleration.Q.14. For a particle performing uniform circular motion, choose the correct statement(s) from the following:(a) Magnitude of particle velocity (speed) remains constant.(b) Particle velocity remains directed perpendicular to radius vector.(c) Direction of acceleration keeps changing as particle moves.(d) Angular momentum is constant in magnitude but direction keeps changing.Ans. (a, b, c)Solution.While a particle is in uniform circular motion. Then the following statements are true.(i) speed will be always constant throughout.(ii) velocity will be always tangential in the direction of motion at a particular point.(iii) the centripetal acceleration a = v2/r and its direction will always towards centre of the circular trajectory.(iv) angular momentum (mvr) is constant in magnitude and direction. And its direction is perpendicular to the plane containing r and v.

Hence options (b) and (d) are correct.

Q.1. A cyclist starts from centre O of a circular park of radius 1km and moves along the path OPRQO as shown Fig. If he maintains constant speed of 10ms–1, what is his acceleration at point R in magnitude and direction?

Ans. According to the problem the path of the cyclist is O-P- R-Q-O. 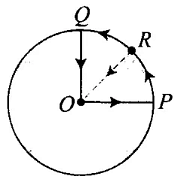 Q.2. A particle is projected in air at some angle to the horizontal, moves along parabola as shown in Fig, where x and y indicate horizontal and vertical directions, respectively. Show in the diagram, direction of velocity and acceleration at points A, B and C. 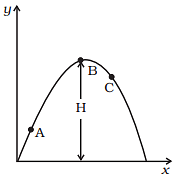 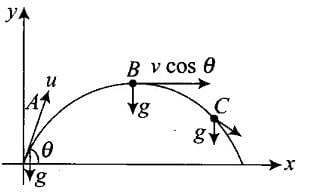 vx = Horizontal component of velocity= v cos θ = constant.vy = Vertical component of velocity= v sinθQ.3. A ball is thrown from a roof top at an angle of 45° above the horizontal. It hits the ground a few seconds later. At what point during its motion, does the ball have(a) Greatest speed.(b) Smallest speed.(c) Greatest acceleration?Ans. A ball is projected from O at an angle of 450 with horizontal. From O to A body rises up, height increases so its speed & hence KE (speed) decreases.From A to B it’s speed again increases as its height decreases equal to its’s initial speed at O, because O and B are on the same horizontal line. 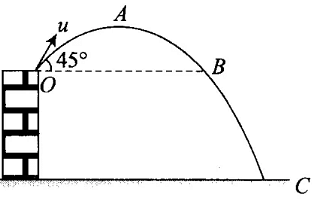 From B to C, its height again decreases so its speed from B to C increases and become maximum at C vy maximum. vx = u cos 450 = u/√2 m/s is always constant at any point.Hence, (a) greatest speed of ball is at C as vy maximum and vx = u/√2(b) the smallest speed will be at A where maximum height and the vy = 0 has the only horizontal speed of constant value u/√2(c) As the force acting on the ball is only due to gravitational force downward and is constant so acceleration is also constant downward and always equal to ‘g’.Q.4. A football is kicked into the air vertically upwards. What is its (a) acceleration, and (b) velocity at the highest point?Ans. (a) The situation is shown in the diagram below in which a football is kicked into the air vertically upwards. Acceleration of the football will always be vertical downward and is called acceleration due to gravity (g).(b) When the football reaches the highest point it is momentarily at rest and at that moment its velocity will be zero as it is continuously retarded by acceleration due to gravity (g).Q.5. A, B and C are three non-collinear, non co-planar vectors. What can you say about direction of A × (B × C)?Ans. The direction of the vector

will be perpendicular to the plane containing by vectors

by Right-hand thumb or Right-hand grip rule (RHGR).The direction of the vector

will be perpendicular to

and in a plane containing

The document NCERT Exemplar: Motion in a Plane- 1 - Notes - JEE is a part of JEE category.
All you need of JEE at this link: JEE
Attempt Now