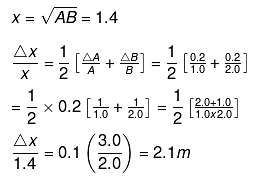 Ans. (b, c)Solution.The argument of trigonometric functions (sin, cos etc.) should be dimensionless. y is displacement and according to the principle of homogeneity of dimensions LHS and RHS.[Y] = [L], [a] =  [L][2πt/T] = [T/T][vt] = [v] [t] = [LT-1] [T] = [L][a/T]/[a]/[T] = [L]/[T] = [LT-1][t/a] = [LT-1][LHS] ≠ [RHS]Hence, (c) is not the correct option.⇒ LHS ≠ RHS.So, option (b) is also not correct.Q.14. If P, Q, R are physical quantities, having different dimensions, which of the following combinations can never be a meaningful quantity?(a) (P – Q)/R(b) PQ – R(c) PQ/R(d) (PR – Q2)/R(e) (R + Q)/PAns. (a, e)Solution.Principle of Homogeneity of dimensions: It states that in a correct equation, the dimensions of each term added or subtracted must be same. Every correct equation must have same dimensions on both sides of the equation.According to the problem P, Q and R are having different dimensions, since, sum and difference of physical dimensions, are meaningless, i.e., (P – Q) and (R + Q) are not meaningful.So in option (b) and (c), PQ may have the same dimensions as those of R and in option (d) PR and Q2 may have same dimensions as those of R.Hence, they cannot be added or subtracted, so we can say that (a) and (e) are not meaningful.Q.15. Photon is quantum of radiation with energy E = hν where ν is frequency and h is Planck’s constant. The dimensions of h are the same as that of(a) Linear impulse(b) Angular impulse(c) Linear momentum(d) Angular momentumAns. (b, d)Solution.∴ E = hvh = E/v = [ML2T-2]/[T-1] = [ML2T-1]Linear impulse = F.t = dp/dt.dt = dp= mv = [MLT-1]Angular impulse =τ.dt = dL/dt.dt = dL = mvr= [M][LT-1][L] = [ML2T-1]Linear momentum = mv = [MLT-1]Angular momentum L = mvr = [ML2T-1]So the dimensional formulae of h, Angular impulse and Angular momentum are same.Q.16. If Planck’s constant (h) and speed of light in vacuum (c) are taken as two fundamental quantities, which one of the following can, in addition, be taken to express length, mass and time in terms of the three chosen fundamental quantities?(a) Mass of electron (me)(b) Universal gravitational constant (G)(c) Charge of electron (e)(d) Mass of proton (mp)Ans. (a, b, d)Solution. We know that dimension of 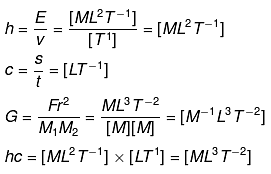 Hence, physical quantities (a, b and d) can be used to represent L, M,T in terms of the choosen fundamental quantities.Q.17. Which of the following ratios express pressure?(a) Force/Area(b) Energy/Volume(c) Energy/Area(d) Force/VolumeAns. (a, b)Solution.Let us first express the relation of pressure with other physical quantities one by one with the help of dimensional analysis.We know that pressure

Dimensions of this ratio are not same as pressure, so this ratio does not express pressure.

Dimensions of this ratio are not same as pressure, so this ratio does not express pressure.Q.18. Which of the following are not a unit of time?(a) Second(b) Parsec(c) Year(d) Light yearAns. (b, d)Solution.Parsec and light year are those practical units which are used to measure large distances. For example, the distance between sun and earth or other celestial bodies. So they are the units of length not time. Here, second and year represent time.Important point: 1 light year (distance that light travels in 1 year with speed = 3 × 108 m/s.) = 9.46 × 1011 m and 1 par see = 3.08 × 1016 m

Q.1. Why do we have different units for the same physical quantity?Ans. Magnitude of any given physical quantity may vary over a wide range, therefore, different units of same physical quantity are required.Example:(a) Mass ranges from 10-30 kg (for an electron) to 1053 kg (for the known universe). We need different units to measure them like miligram, gram, kilogram etc.(b) The length of a pen can be easily measured in cm, the height of a tree can be measured in metres, the distance between two cities can be measured in kilometres and distance between two heavenly bodies can be measured in light year.Q.2. The radius of atom is of the order of 1 Å and radius of nucleus is of the order of fermi. How many magnitudes higher is the volume of atom as compared to the volume of nucleus?Ans. Radius (R) of  atom = 1 = 10-10 mRadius (r) of nucleus = 1 fermi =10-15 mRatio  of  volume  of atom to nucleus

Why is it necessary for f(θ) to be a dimensionless quantity?Ans. θ is represented by angle which is equal to

The document NCERT Exemplar: Units & Measurements - 1 - Notes | Study Physics Class 11 - NEET is a part of the NEET Course Physics Class 11.
All you need of NEET at this link: NEET
Attempt Now
Join Course