Q.3. When a voltage measuring device is connected to AC mains, the meter shows the steady input voltage of 220V. This means(a) Input voltage cannot be AC voltage, but a DC voltage.(b) Maximum input voltage is 220V(c) The meter reads not v but <v2> and is calibrated to read

(d) The pointer of the meter is stuck by some mechanical defectAns. (c)Solution.The voltmeter connected to AC mains calibrated to read rms value

So to reduce resonant frequency, we have either to increase L or to increase C.To increase capacitance another capacitor must be connected in parallel with the first.

So for higher Q, L must be large, and R and C must be of smaller value.This condition is satisfied in (c) part. 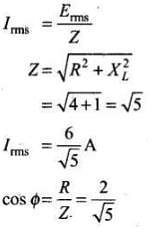 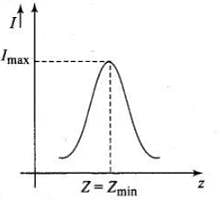 Xc = Reactance of the capacitive circuit

With an increase in frequency (f) of an AC circuit, R remains constant, inductive reactance (XL) increases and capacitive reactance (Xc) decreases.For an L-C-R circuit,Z = Impedance of the circuit

As frequency (v) increases, Z decreases and at certain value of the frequency known as resonant frequency (v0), impedance Z is minimum that is Zmin = R current varies inversely with impedance and at Zmin current is maximum.Q.9. In an alternating current circuit consisting of elements in series, the current increases on increasing the frequency of supply. Which of the  following elements are likely to constitute the circuit ?(a) Only resistor(b) Resistor and an inductor(c) Resistor and a capacitor(d) Only a capacitorAns. (c, d)Solution.Here in question on increasing the frequency(v) the current also increase.So capacitive reactance of circuit decreases and resistance does not depend on frequency. So on increasing frequency, XC decreases to increase current in circuit.Q.10. Electrical energy is transmitted over large distances at high alternating voltages. Which of the following statements is (are) correct?(a) For a given power level, there is a lower current.(b) Lower current implies less power loss.(c) Transmission lines can be made thinner.(d) It is easy to reduce the voltage at the receiving end using step-down transformersAns. (a, b, d)Solution.As we know that Power = I2rmsRSo to decrease power loss Irms, and R must be lower for a constant power supply. To decrease Irms, Vrms must be increased by step up transformer to get same power in step up transformerOutput power=Input powerVsIs = VpIp∵ VS>VP so IP ≫ IS, so loss of power during transmission become lower. We can again reduce voltage by using step down transformer.Q.11. For an LCR circuit, the power transferred from the driving source to the driven oscillator is P = I2Z cos φ.(a) Here, the power factor cos φ ≥ 0, P≥ 0(b) The driving force can give no energy to the oscillator (P = 0) in some cases(c) The driving force cannot syphon out (P<0) the energy out of oscillator(d) The driving force can take away energy out of the oscillatorAns. (a, b, c)Solution.In the given problem power transferred,P = I2Zcos φWhere I is the current, Z = Impedance and cos φ is power factor(a) As power factor, cos φ = R/Zwhere R > 0 and Z > 0⇒ cos φ > 0 ⇒ P > 0(b) when φ = π/2 ( in case of L or C), P = 0.(c) from (a), it is clear that P < 0 is not possible.Q.12. When an AC voltage of 220 V is applied to the capacitor C(a) the maximum voltage between plates is 220 V(b) The current is in phase with the applied voltage(c) The charge on the plates is in phase with the applied voltage(d) Power delivered to the capacitor is zeroAns. (c, d)Solution.When capacitor is connected to ac supply the plate of capacitor will be at higher potential which is connected to the positive terminal than the plate connected to the negativeterminal. 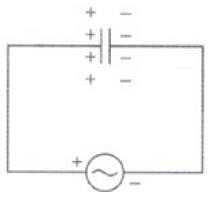 Q.13. The line that draws power supply to your house from street has(a) Zero average current(b) 220 V average voltage(c) Voltage and current out of phase by 90°(d) Voltage and current possibly differing in phase ϕ such that |ϕ| < π/2Ans. (a, d)Solution.AC supply are used in houses.So average current over a cycle of AC is zero. In household circuit L and C are connected, so R and Z cannot be equal.So, Power factor 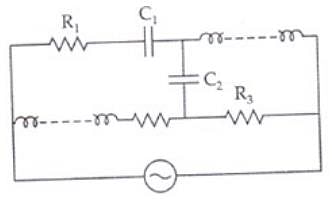 Here the above figure is equivalent circuit to given circuit.Total impedance, Z=R1+R3.Q.16. Study the circuits (a) and (b) shown in Figure and answer the following questions.

(a) Under which conditions would the rms currents in the two circuits be the same?(b) Can the rms current in circuit (b) be larger than that in (a)?Ans.

Again as cos ϕ = R/Z is always positive, because R and Z, the reactances are always positive.So Pav can never be negative.Q.18. In series LCR circuit, the plot of Imax vs ω is shown in Figure. Find the bandwidth and mark in the figure.

Ans. We know that band width=(ω2-ω1).Where ω1 and ω2 are two frequencies where the current amplitude of LCR circuit becomes 1/√2 times (i.e., Irms) the value of current is maximum at resonant frequency. 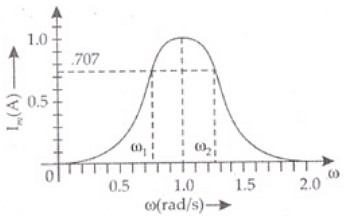 Ans. Graph or rms current is shown below by dotted line 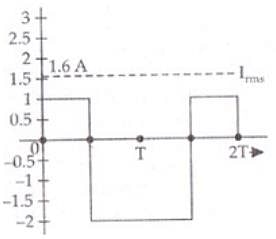 If v is small XC>XL so

is negative, so tan ϕ < 0.For v is large, XL>XCSo XL-XC is positive or tan ϕ>0For XL=XC i.e. at resonant frequencyXL - XC=0 so tan ϕ=0.So phase angle in series LCR ac circuit will change from a negative to zero and then zero to positive value. 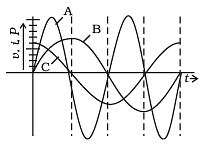 Ans.  (a) Power is the product of voltage and current (Power = P = VI).So, the curve of power will be having maximum amplitude, equals to the product of amplitudes of voltage (V) and current (I) curve. Frequencies , of B and C are-equal, therefore they represent V and I curves. So, the curve A represents power.(b) The full cycle of the graph (as shown by shaded area in the diagram) consists of one positive and one negative symmetrical area. 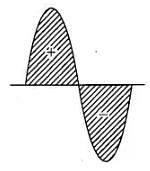 Hence, average power consumption over a cycle is zero.(c) Here phase difference between V and I is π/2 therefore, the device ‘X’ may be an inductor (L) or capacitor (C) or the series combination of L and C.Q.22. Both alternating current and direct current are measured in amperes. But how is the ampere defined for an alternating current?Ans.  For a Direct Current (DC),1 ampere = 1 coulomb/secDirection of AC changes with the frequency of source with the source frequency and the attractive force would average to zero. Thus, the AC ampere must be defined in terms of some property that is independent of the direction of current. Joule’s heating effect is such property and hence it is used to define rms value of AC.So, r.m.s. value of AC is equal to that value of DC, which when passed through a resistance for a given time will produce the same amount of heat as produced by the alternating current when passed through the same resistance for same time.Q.23. A coil of 0.01 henry inductance and 1 ohm resistance is connected to 200 volt, 50 Hz ac supply. Find the impedance of the circuit and time lag between max. alternating voltage and current.Ans.  R=1 Ω, L=0.01H, V=200 V, v=50 Hz. 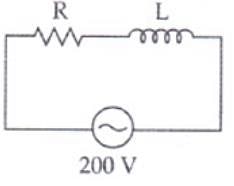 Impedance of the circuit

The current differs (lags) in phase by

as compared to voltage. Find (i) R, (ii) XC – XL, and (iii) IM. Another device has twice the values for R, XC and XL. How are the answers affected?Ans. P= 2000W Current lags the voltage so

will remain same. (ii) Z will become double then I = V/Z become half as value of V does not change. (iii) As I become half P=VI will become again half as voltage remains same.Q.28. 1 MW power is to  be delivered from a power station to a town 10 km away. One uses a pair of Cu wires of radius 0.5 cm for this purpose. Calculate the fraction of ohmic losses to power transmitted if(i) power is transmitted at 220V. Comment on the feasibility of doing this.(ii) a step-up transformer is used to boost the voltage to 11000 V, power transmitted, then a step-down transformer is used to bring voltage to 220 V.(ρCu= 1.7 ×10-8 SI unit)Ans. When power is transmitted at 220 V.Power lost in transmission P = I2RP = VIP=1 MW=106WV=220 Volt

Power loss in % = 3.3%Q.29. Consider the LCR circuit shown in Figure. Find the net current i and the phase of i. Show that i = v/z. Find the impedance Z for this circuit. 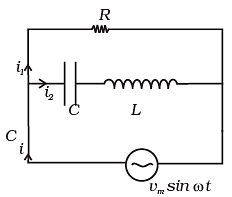 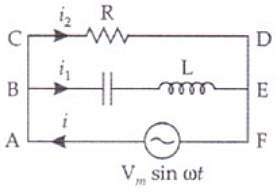 q1 is charge on the capacitor at any time t, then for series combination of C, L. applying Kirchhoff’s voltage law in loop ABEFA.VC+VL= VM sin ωt

Substitute the values of equations (III) and (V) in equation (II) 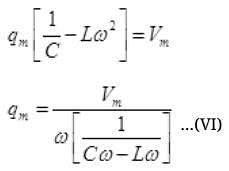 Now using relation VI for qm and at ϕ=0 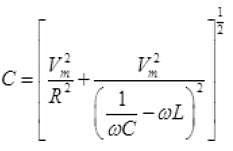 This is the impedance Z for the circuit.Q.30. For an LCR circuit driven at frequency ω, the equation reads

(i) Multiply the equation by i and simplify where possible(ii) Interpret each term physically(iii) Cast the equation in the form of a conservation of energy statement(iv) Integrate the equation over one cycle to find that the phase difference between v and i must be acuteAns. Consider L-C-R series circuit with AC supplyV=Vm sin ωtApplying voltage Kirchhoff’s law over the circuit∴ VL+VC+VR = Vm sin ωt 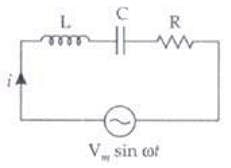 (a) Multiply the above equation by i on both the sides.

Multiply above equation by 1/2 on both sides

represents the rate of change of potential energy in inductance L.

is the rate at which driving force pours in energy. It goes into ohmic loss and increase of stored energy in capacitor and inductor.(c) Here equation (I) is in the form of conservation of energy statement.(d) Integrating eqn. (I) both sides with respect to dt over a cycle we get

is positive which is only possible if phase difference ϕ is constant and the angle is acute.Q.31. In the LCR circuit shown in Figure, the ac driving voltage is v = vm sin ωt. (i) Write down the equation of motion for q (t). (ii) At t = t0, the voltage source stops and R is short circuited. Now write down how much energy is stored in each of L and C. (iii) Describe subsequent motion of charges. 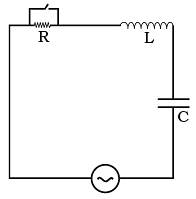 Ans. (i) Consider series LCR circuit and tapping key K to short circuit R. Let i be the current in circuit. Then by Kirchhoff’s voltage law, when key K is open, 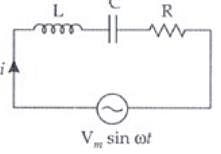 ⇒ As charge q(t) changes in circuit with time in AC,Then,

This is the equation for variation of motion of charge with respect to time.(ii) Let time dependent charge in circuit is at phase angle with voltage then q=qm cos(ωt + ϕ)

At t = t0, R is short circuited, then energy stored in L and C, when K is closed will be,

(c) When R is short circuited, the circuit becomes L-C oscillator. The capacitor will go on discharging and all energy will transfer to L, and back and forth. Hence there is oscillation of energy from electrostatic to magnetic and vice versa.

The document NCERT Exemplar: Alternating Current Notes | Study Physics For JEE - JEE is a part of the JEE Course Physics For JEE.
All you need of JEE at this link: JEE
Join Course