The document NCERT Exemplar - Cell - The Fundamental Unit of Life Class 9 Notes | EduRev is a part of the Class 9 Course Science Class 9.
All you need of Class 9 at this link: Class 9

Q.1. Do you agree that “A cell is a building unit of an organism”. If yes, explain why?Ans. Yes, cell is a building unit of every living organism as every living being is made up of one or more cells.Cells tissues → organs → organ systems → organism
Cells are first organised into tissues and tissues are organised to form organs and organs are grouped into organ systems. Therefore, cell remains the basic building unit of the organism.Q.2. Why does the skin of your finger shrink when you wash clothes for a long time?Ans. Soap solution is very concentrated-hypertonic solution, so water moves out of your finger cells by osmosis. Because of this, the skin over the fingers shrinks while washing clothes for a long time.Q.3. Why is endocytosis found in animals only?Ans. Endocytosis is possible only when plasma membrane is in direct contact with external medium and it occurs only in animal cells as cell wall is absent over plasma membrane.Q.4. A person takes concentrated solution of salt, after sometime, he starts vomiting. What is the phenomenon responsible for such situation? Explain.Ans. The concentrated salt solution causes irritation and excessive dehydration in the stomach due to exosmosis. This makes the person uncomfortable causing reverse movements and thus vomiting.Q.5. Name any cell organelle which is nonmembranous.Ans. RibosomesQ.6. We eat food composed of all the nutrients like carbohydrates, proteins, fats, vitamins, minerals and water. After digestion, these are absorbed in the form of glucose, amino acids, fatty acids, glycerol, etc. What mechanisms are involved in absorption of digested food and water?Ans. Diffusion and osmosis are the mechanisms involved in absorption of digested food and water.

Q.8. If cells of onion peel and RBC are separately kept in hypotonic solution, what among the following will take place? Explain the reason for your answer.
(a) Both the cells will swell.
(b) RBC will burst easily while cells of onion peel will resist the bursting to some extent.
(c) a and b both are correct.
(d) RBC and onion peel cells will behave similarly.
Ans. (b) Onion peel has cell wall and RBC does not have cell wall. Thus, RBC will burst as there is no mechanism to restrict entry of water into them. But onion peel cells do not burst as cell wall is rigid.

Q.9. Bacteria do not have chloroplast but some bacteria are photoautotrophic in nature and perform photosynthesis. Which part of bacterial cell performs this?
Ans. Photoautotrophic bacteria posses photosynthetic pigments inside small vesicles associated with plasma membrane. Q.11. Write the name of different plant parts in which chromoplast, chloroplast and leucoplast are present.
Ans. Flower and Fruit — Chromoplast
Leaves o f the plant— Chloroplast
Root of the plant — Leucoplast

Q.14. Name the two organelles in a plant cell that contain their own genetic material and ribosomes.
Ans. Mitochondria and plastids

Q.15. Why are lysosomes also known as “scavengers of the cells”?
Ans. Lysosomes remove the debris of the cell consisting of dead and worn-out cell organelles by digesting them.

Q.17. Which kind of plastid is more common in
(a) roots of the plant
(b) leaves of the plant
(c) flowers and fruits
Ans. (a) Leucoplast
(b) Chloroplast
(c) Chromoplast

Q.21. Draw a plant cell and label the parts which
(a) determines the function and development of the cell.
(b) packages materials coming from the endoplasmic reticulum.
(c) provides resistance to microbes to withstand hypotonic external media without bursting.
(d) is site for many biochemical reactions necessary to sustain life.
(e) is a fluid contained inside the nucleus.
Ans. Q.22. Illustrate a plant cell as seen under electron microscope. How is it different from an animal cell?
Ans. 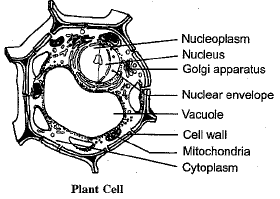 Q.24. Draw a well labelled diagram of an eukaiyotic nucleus. How is it different from nucleoid ?
Ans. 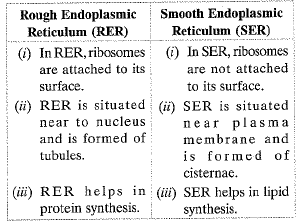 Q.26. In brief state what happens when
(a) dry apricots are left for some time in pure water and later transferred to sugar solution?
(b) a Red Blood Cell is kept in concentrated saline solution?
(c) the plasma-membrane of a cell breaks down?
(d) Rheo leaves are boiled in water first and then a drop of sugar syrup is put on it?
(e) Golgi apparatus is removed from the cell?
Ans. (a) First it swells due to endosmosis and then it shrinks due to exosmosis.
(b) It will lose water and shrink.
(c) The cell will die as protoplasmic structures will get dispersed.
(d) The cell gets killed on boiling so no change will be observed.
(e) All sorts of vesicle and lysosome formation stops.