= 2.65 x 1015 HzThis frequency radiation belongs to the ultraviolet region.Q.2. A linearly polarized electromagnetic wave given as

is incident normally on a perfectly reflecting infinite wall at z = a. Assuming that the material of the wall is optically inactive, the reflected wave will be given as(a) Er = – Eo

= 36×10-4 kg ms-1As no reflection from the surface and for complete absorption so momentum of reflected radiation is zero.Momentum delivered to surface= Change in momentum

magnetic field vector B, i.e., in the direction of

.Here, electromagnetic wave is along the z-direction which is given by the cross product o f E and B.Q.6. The ratio of contributions made by the electric field and magnetic field components to the intensity of an EM wave is(a) c : 1(b) c2 : 1(c) 1 : 1(d) √c :1Ans. (c)Solution.The intensity of electromagnetic wave is given by, I = Uavc, where Uav =Average energy and c = speed of lightIntensity in relation with electric field

Now taking the intensity in terms of electric field,

= (Uav)magnetic fieldQ.7. An EM wave radiates outwards from a dipole antenna, with E0 as the amplitude of its electric field vector. The electric field E0 which transports significant energy from the source falls off as(a) 1/r3(b) 1/r2(c) 1/r(d) Remains constant.Ans. (c)Solution.As we know that electromagnetic waves are radiated from dipole antenna and radiated energy E ∝ 1/rQ.8. An electromagnetic wave travels in vacuum along z direction:

.Choose the correct options from the following:(a) The associated magnetic field is given as

(b) The associated magnetic field is given as

are long X- and Y-axis respectively so the direction of propagation is Z-axis and E.M. wave is plane polarized along X and Y direction

respectively verifies option (d).Q.9. An electromagnetic wave traveling along z-axis is given as E = E0 cos (kz - ωt).Choose the correct options from the following:(a) The associated magnetic field is given as 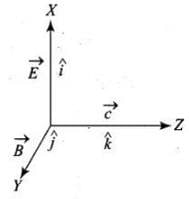 Q.10. A plane electromagnetic wave propagating along x direction can have the following pairs of E and B(a) Ex, By.(b) Ey, Bz.(c) Bx, Ey.(d) Ez, By.Ans. (b) and (d)Solution.As the EM wave is plane polarized and its propagation is in +X direction. So direction of

= 0.3 mverifies answer (c)As the range of radio waves are between 10 Hz to 1012 Hz and 109 Hz lies between this range verifies answer (d).Q.12. The source of electromagnetic waves can be a charge(a) Moving with a constant velocity.(b) Moving in a circular orbit.(c) At rest.(d) Falling in an electric field.Ans. (b, d) Solution.Key concept:

Here, in option (b) charge is moving in a circular orbit.In circular motion, the direction of the motion of charge is changing continuously, thus it is an accelerated motion and this option is correct.In option (d), the charge is falling in electric field. If a charged particle is moving in electric field it experiences a force or we can say it accelerates. We know an accelerating charge particle radiates electromagnetic waves. Hence option (d) is also correct.Also, we know that a charge starts accelerating when it falls in an electric field.Important points:

Q.14. Why is the orientation of the portable radio with respect to broadcasting station important?Ans. Transmitted carrier wave signals are plane polarized and if the intensity of signal is poor then receiving antenna of radio must be parallel to the component of either electric or magnetic field. Because energy is only due to amplitudes of electric and magnetic components in EM wave, magnitude of amplitude is in particular direction perpendicular to each other and perpendicular to wave propagation.Q.15. Why does microwave oven heats up a food item containing water molecules most efficiently?Ans. In Microwave oven, molecules of food item starts to vibrate by driven force due to microwaves with the frequency of microwave. But the natural frequency of water molecules matches with microwave frequency which causes resonance (more amplitude) which further causes increase in temperature.Q.16. The charge on a parallel plate capacitor varies as q = q0cos 2πνt. The plates are very large and close together (area = A, separation = d). Neglecting the edge effects, find the displacement current through the capacitor?Ans. The displacement current Id  in capacitor is Id=IC = dq/dt, where q = q0 cos(2πvt) (Given)Id=IC

Id = -q0 2πv sin πvtId=-2πvq0πvt)Q.17. A variable frequency a.c source is connected to a capacitor. How will the displacement current change with decrease in frequency?Ans. As we know that Xc = 1/2πvC and I = V/XcSo reactance of capacitor increases on decreasing frequency

So I = 2πv CVAs reactance of capacitor increases, the current by Ohm’s law will decrease.

= 1.71 W/m2Q.19. Poynting vectors S is defined as a vector whose magnitude is equal to the wave intensity and whose direction is along the direction of wave propagation. Mathematically, it is given by

. Show the nature of S vs t graph.Ans. In an electromagnetic waves, let

be varying along y-axis,

is along z-axis and propagation o f wave be along x-axis. Then

will tell the direction of propagation of energy flow in electromagnetic wave, along x-axis.Let

Since sin2(ωt - kx) is never negative,

(x, t) always points in the positive A'-direction, i.e, in the direction of wave propagation.The variation of |S| with time T will be as given in the figure below:

Q.21. Show that the magnetic field B at a point in between the plates of a parallel-plate capacitor during charging is

(symbols having usual meaning).Ans. Let us assume Id be the displacement current in the region between two plates of parallel plate capacitor, in the figure.

Q.23. Show that average value of radiant flux density ‘S’ over a single period ‘T’ is given by S =

Hence ProvedQ.24. You are given a 2µF parallel plate capacitor. How would you establish an instantaneous displacement current of 1mA in the space between its plates?Ans. The capacitance of capacitor C = 2μF,Displacement current Id = 1 mACharge in capacitor, q = CVIddt = CdV [∵ q = it]or

1 x 10-3 = 2 x 10-6 x dv/dtor dv/dt = 1/2 x 103 = 500V/sHence by applying a varying potential difference of 500 V/s, we would produce a displacement current of desired value.Q.25. Show that the radiation pressure exerted by an EM wave of intensity I on a surface kept in vacuum is I/C.Ans. Let us consider a surface exposed to electromagnetic radiation. The radiation is falling normally on the surface. Further, intensity of radiation is I and area of surface exposed to radiation is A.Ans. E - Energy received by surface per second = I. AN = Number of photons received by surface per second.

Let the surface is perfectly absorbing,

Also, Pressure P = F/A = 1/cQ.26. What happens to the intensity of light from a bulb if the distance from the bulb is doubled? As a laser beam travels across the length of a room, its intensity essentially remains constant. What geometrical characteristic of LASER beam is responsible for the constant intensity which is missing in the case of light from the bulb?Ans. We know intensity of light from a point source I α 1/r2, r is the distance from point source.As the distance is doubled, so the intensity becomes one-fourth the initial value. But in case of laser it does not spread, so its intensity remain same.Some geometrical characteristics of LASER beam which are responsible for the constant intensity is(i) Unidirectional(ii) Monochromatic(iii) Coherent light(iv) Highly collimatedThese characteristics are missing in the case of normal light from the bulb.Q.27. Even though an electric field E exerts a force qE on a charged particle yet the electric field of an EM wave does not contribute to the radiation pressure (but transfers energy). Explain.Ans. The electric field of an electromagnetic wave is an oscillation field. It exerts electric force on a charged particle, but this electric force averaged over an integral number of cycles is zero, since its direction changes every half cycle. Hence, electric field is not responsible for radiation pressure though it transfer the energy. In fact, radiation pressure appears as a result of the action of the magnetic field of the wave on the electric currents induced by the electric field of the same wave.

Q.28. An infinitely long thin wire carrying a uniform linear static charge density λ is placed along the z-axis (Fig). The wire is set into motion along its length with a uniform velocity 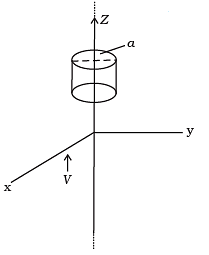 Ans. The electric field due to infinitely long thin wire

Magnetic field due to the wire,

Equivalent current flowing through the wire, i = λvHence

The displacement current density is given as

The displacement current density is given by 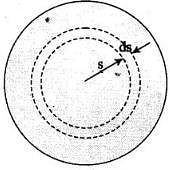 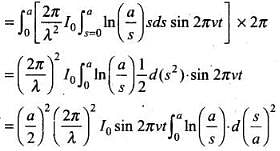 Q.31. A plane EM wave travelling in vacuum along z direction is given by

over the rectangular loop 1234 shown in Fig.(ii) Evaluate

over the surface bounded by loop 1234.

to prove Eo/B0 = c.(iv) By using similar process and the equation 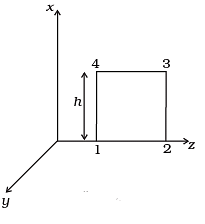 Ans. (i) Let electromagnetic wave is propagating along z-axis, in this case electric field vector (

) be along x-axis and magnetic field vector ( 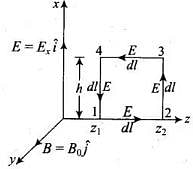 let us consider the rectangle 1234 to be made of strips of are ds = hdz each. 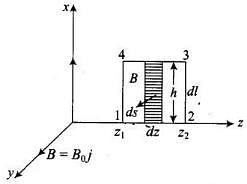 Substituting the values from Eqs. (i) and (ii), we get 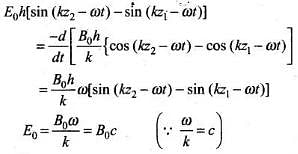 let us consider a loop 1234 in y-z plane as shown in figure given below. 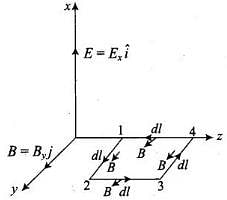 let us consider the rectangle 1234 to be made of strips of area hds each. 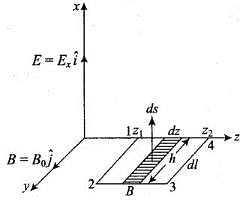 where I = conduction current= 0 in vacuum

Using relations obtained in Eqs. (iii) and (iv) and simplifying, we get

(ii) The time averaged intensity of the wave is given by

The energy density due to magnetic field B is

Hence, the time average value of E2 over complete cycle,

And, the time average value of B2 over complete cycle,

The time average of energy density over complete cycle

Time average intensity of the wave

The document NCERT Exemplar: Electromagnetic Waves Notes | Study Physics For JEE - JEE is a part of the JEE Course Physics For JEE.
All you need of JEE at this link: JEE
Join Course