Q.21. Alkynes on reduction with sodium in liquid ammonia form trans alkenes. Will the butene thus formed on reduction of 2-butyne show the geometrical isomerism?Ans.

Thus, but-2-ene is capable of showing geometrical isomerism.Q.22. Rotation around carbon-carbon single bond of ethane is not completely free. Justify the statement.Ans. Ethane contains carbon-carbon sigma (σ) bond. Electron distribution of the sigma molecular orbital is symmetrical around the internuclear axis of the C – C bond which is not disturbed due to rotation about its axis. This permits free rotation around a C-C single bond. However, rotation around a C – C single bond is not completely free. It is hindered by a small energy barrier due to weak repulsive interaction between the adjacent bonds. Such a type of repulsive interaction is called torsional strain.

In staggered form of ethane, the electron clouds of carbon-hydrogen bonds are as far apart as possible. Thus, there are minimum repulsive forces, minimum energy and maximum stability of the molecule.

On the other hand, when the staggered form changes into the eclipsed form, the electron clouds of the carbon-hydrogen bonds come closer to each other resulting in increase in electron cloud repulsions. To check the increased repulsive forces, molecule will have to possess more energy and thus has lesser stability.Q.24. The intermediate carbocation formed in the reactions of HI, HBr and HCl with propene is the same and the bond energy of HCl, HBr and HI is 430.5 kJ mol-1, 363.7 kJ mol–1 and 296.8 kJ mol–1 respectively. What will be the order of reactivity of these halogen acids?Ans. The bond dissociation enthalpy decreases in the order HCl > HBr > HI, therefore, the order of reactivity is in the reverse order i.e., HI > HBr > HCl.Q.25. What will be the product obtained as a result of the following reaction and why?

Propyl chloride forms CH3 – CH2 – CH+2 with anhydrous A1C13 which is less stable. This rearranges to a more stable carbocation as:

Q.29. Why does presence of a nitro group make the benzene ring less reactive in comparison to the unsubstituted benzene ring. Explain.Ans. Nitro group has -I and -R effect due to that benzene ring deactivates and electron density decreases on ortho and para positions as compared to meta positions.

Q.30. Suggest a route for the preparation of nitrobenzene starting from acetylene?Ans. Ethyne, when passed through red hot iron tube at 873 K, undergoes cyclic polymerization to give benzene which upon subsequent nitration gives nitrobenzene. 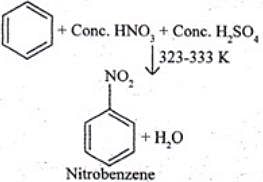 Q.31. Predict the major product (s) of the following reactions and explain their formation.

Ans. Addition of HBr to unsymmetrical alkenes follows Markonikov rule. It states that negative part of the addendum (adding molecule) gets attached to that carbon atom which possesses lesser number of hydrogen atoms.Mechanism: Hydrogen bromide provides an electrophile, H+, which attacks the double bond to form carbocation as shown below:

The carbocation (b) is attacked by Br- ion to form the product as follows:

Addition reaction of HBr to unsymmetrical alkenes in the presence of peroxide follows the anti-Markovnikov rule.Mechanism: Peroxide effect proceeds via free radical chain mechanism as given below: 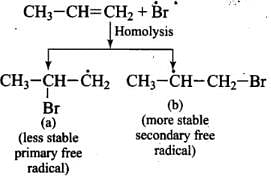 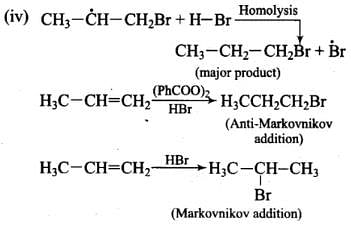 (B) Secondary (2 positions for Cl group possible at CH)

Q.34. Write the structures and names of products obtained in the reactions of sodium with a mixture of 1-iodo-2-methylpropane and 2-iodopropane.Ans. Products obtained are based on Wurtz reaction, n-alkyl halide on treatment with Name talin presence of ether gives alkane having double carbon atoms.RX + 2Na + XR→ R-R + 2NaX

CH3-CH(CH3)-CH2l + 2Na + I CH(CH3)-CH3→2NaICH3-CH(CH3)-CH-CH3-CH3(2, 4-dimethylpentane)Q.35. Write hydrocarbon radicals that can be formed as intermediates during monochlorination of 2-methylpropane? Which of them is more stable? Give reasons.Ans. 2-methylpropane gives two types of radicals:Tertiary 3° free radical is more stable because it has 9 α Hydrogen and Due to hyperconjugation structure sit stabilized.

This compound gives only one isomer of tertiary bromide. Therefore, the name of C8H16 is 2, 5-dimethylhexane.

CH3-CH(CH3)-CH2-CH2-CH(CH3-CH3+ Br2^ HBr + CH3—CBr(CH3-CH2-CH2-CH(CH3)-CH32-Bromo 2, 5-dimethylhexane.Q.37. The ring systems having following characteristics are aromatic.(i) Planar ring containing conjugated π bonds.(ii) Complete delocalisation of the π−electrons in ring system i.e. each atom in the ring has unhybridised p-orbital, and(iii) Presence of (4n + 2) π−electrons in the ring where n is an integer (n = 0, 1, 2,...........) [Huckel rule].Using this information classify the following compounds as aromatic/nonaromatic. 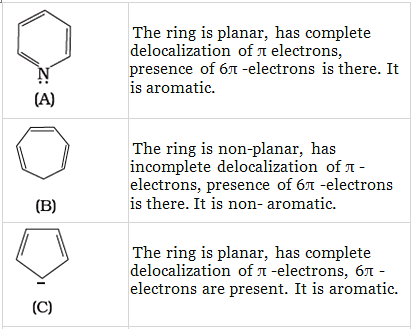 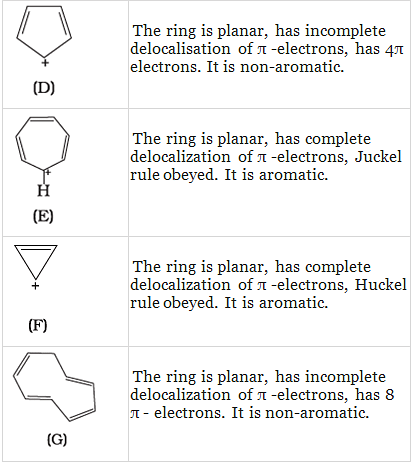 Q.38. Which of the following compounds are aromatic according to Huckel’s rule?(A) 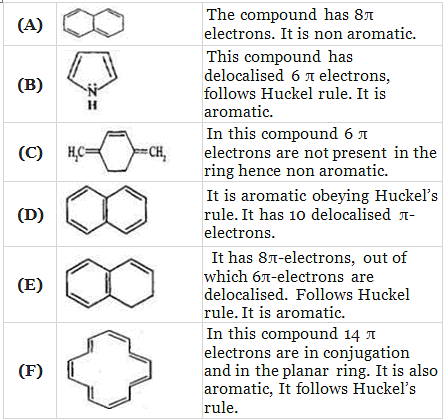 Q.40. In the presence of peroxide addition of HBr to propene takes place according to anti-Markovnikov’s rule but peroxide effect is not seen in the case of HCl and HI. Explain.Ans. Peroxide effect proceeds via free radical chain mechanism as given below:(i)

Peroxide effect is observed only in the case of HBr and not seen in case of HI and HCI. This is due to the fact that the H-Cl bond is stronger than B-Br bond. Also, bond energy of H-Cl bond is higher than H-Br. H-Cl bond is not cleaved by the free radical whereas the HI bond is weaker and iodine free radicals combine to form iodine molecules.
Matching Type Questions

Q.41. Match the hydrocarbons in Column I with the boiling points given in Column II. 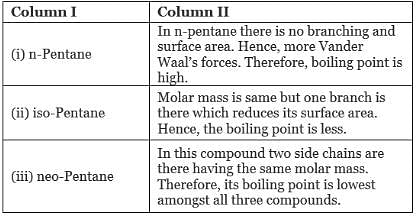 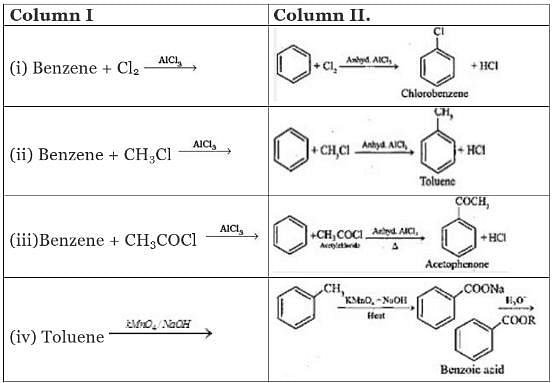 In the following questions a statement of assertion (A) followed by a statement of reason (R) is given. Choose the correct option out of the choices given below each question.

Q.44. Assertion (A): The compound cyclooctane has the following structural formula : 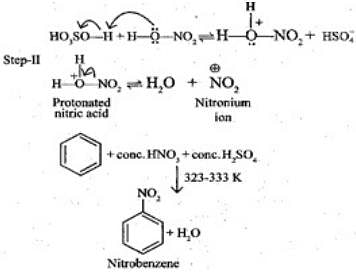