Q.1. A boy travelling in an open car moving on a levelled road with constant speed tosses a ball vertically up in the air and catches it back. Sketch the motion of the ball as observed by a boy standing on the footpath. Give explanation to support your diagram.Ans. With respect to the observer standing on the footpath ball is thrown with velocity u at an angle θ with the horizontal, hence it seems as a projectile. So path of the ball will be parabolic. The horizontal speed of the ball is same as that of the car, therefore, ball as well car travels equal horizontal ult distance. Due to its vertical speed, the ball follows a parabolic path.u1 = car speed, u2 = initial vertical speed of ball 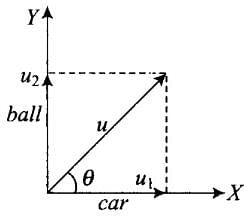 Important point: We must be very clear that we are working with respect to ground. When we observe with respect to the car, motion will be along vertical direction only.Q.2. A boy throws a ball in air at 60° to the horizontal along a road with a speed of 10 m/s (36km/h). Another boy sitting in a passing by car observes the ball. Sketch the motion of the ball as observed by the boy in the car, if car has a speed of (18km/h). Give explanation to support your diagram.Ans. The situation is shown in the below diagram.

According to the problem the boy standing on ground throws the ball at an angle of 60° with horizontal at a speed of 10 m/s.∴ Horizontal component of velocity, ux = 10 cos θ

Speed of the car = 18 km/h = 5 m/sAs horizontal speed of ball and car is same, hence relative velocity of ball w.r.t car in the horizontal direction will be zero.Only vertical motion of the ball will be observed by the boy in the car, as shown in above diagram.Q.3. In dealing with motion of projectile in air, we ignore effect of air resistance on motion. This gives trajectory as a parabola as you have studied. What would the trajectory look like if air resistance is included? Sketch such a trajectory and explain why you have drawn it that way.Ans. 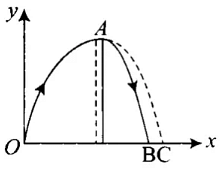 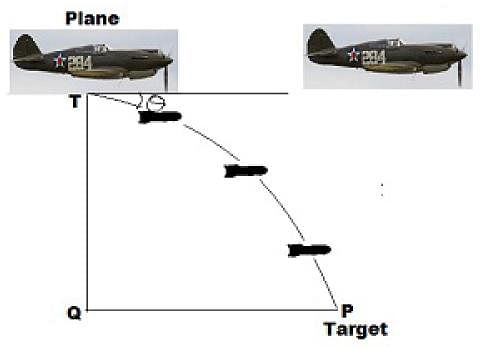 Let pilot drops the bomb t sec before the point Q vertically up the target T.The horizontal velocity of the bomb will to equal to the velocity of the fighter plane, but vertical component of it is zero. So in time t bomb must cover the vertical distance TQ as free fall with initial velocity zero.u = 0, H = 1.5 km = 1500m,g = + 10m/s2

Q.5. (a) Earth can be thought of as a sphere of radius 6400 km. Any object (or a person) is performing circular motion around the axis of earth due to earth’s rotation (period 1 day). What is acceleration of object on the surface of the earth (at equator) towards its centre? what is it at latitude θ ? How does these accelerations compare with g = 9.8 m/s2?(b) Earth also moves in circular orbit around sun once every year with on orbital radius of 1.5 × 1011 m. What is the acceleration of earth (or any object on the surface of the earth) towards the centre of the sun? How does this acceleration compare with g = 9.8 m/s2?

Ans. We apply triangular law of additionTriangular law of vector addition: Two vectors are considered as two sides of a triangle taken in the same order. The third side or completing side of the triangle is the resultant taken in the opposite order.orWe can say that vectors are arranged head to tail, this graphical method is called the head-to-tail method. The two vectors and their resultant form three sides of a triangle, so this method is also known as triangle method of vector addition. 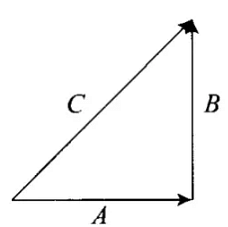 ∴ Option (b) matches with option (i).

Q.1. A hill is 500 m high. Supplies are to be sent across the hill using a canon that can hurl packets at a speed of 125 m/s over the hill. The canon is located at a distance of 800 m from the foot of hill and can be moved on the ground at a speed of 2 m/s; so that its distance from the hill can be adjusted. What is the shortest time in which a packet can reach on the ground across the hill ? Take g =10 m/s2.Ans. According to the problem, speed of packets =125 m/s , height of the hill = 500 m, distance between the cannon and the foot of the hill, d = 800 m 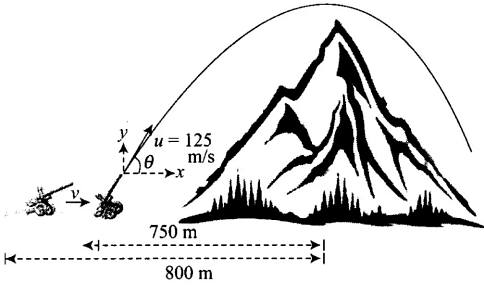 To cross the hill in shortest time, then the vertical component of the velocity should be minimum so that it just crosses the height of hill.

Time taken by the packet to reach the top of the hill, 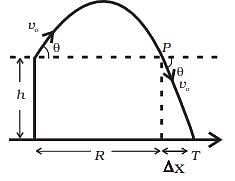 If a target farther away by distance ∆x (beyond R) has to be hit with the same gun (Fig.), show that it could be achieved by raising the gun to a height at least

(Hint: This problem can be approached in two different ways:(i) Refer to the diagram: target T is at horizontal distance x = R + ∆x and below point of projection y = – h.(ii) From point P in the diagram: Projection at speed vo at an angle θ below horizontal with height h and horizontal range ∆x.)Ans. The main concept used: This problem can be solved in two different ways:(i) The target is at horizontal distance (R + Δx) and below the point of projection h metre below i.e., v = -h.(ii) The motion of projectile after point P to T: projection speed is at an angle (-θ) i.e., θº below horizontal and vertical height covered it is (-h) and horizontal range Δx.Solution.

Q.3. A particle is projected in air at an angle β to a surface which itself is inclined at an angle α to the horizontal (Fig.).(a) Find an expression of range on the plane surface (distance on the plane from the point of projection at which particle will hit the surface).(b) Time of flight.(c) β at which range will be maximum. 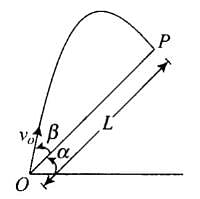 (Hint : This problem can be solved in two different ways:(i) Point P at which particle hits the plane can be seen as intersection of its trajectory (parabola) and straight line.Remember particle is projected at an angle (α + β) w.r.t. horizontal.(ii) We can take x-direction along the plane and y-direction perpendicular to the plane. In that case resolve g(acceleration due to gravity) in two different components, gx along the plane and gy perpendicular to the plane. Now the problem can be solved as two independent motions in x and y directions respectively with time as a common parameter.)Ans. Let’s consider the X-axis parallel to the inclined surface and Y-axis perpendicular to it. v be the speed of the projectile.Range = R, x component of velocity = vcosβy component of velocity = vsinβx component of acceleration = gsinαy component of acceleration = gcosαt is the time of flightLets first find part b. 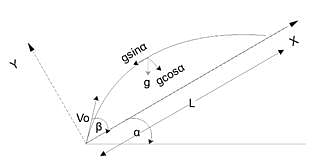 (b) Displacement in y direction is 0.By 2nd kinematic equation in y-direction,

(a) By 2nd kinematic equation in x-direction,

Substituting the value of t in the above equation.

(c) In order to find the value of β for which range is maximum,We need to maximize sinβ cos (α + β)Now,

to be maximum, sin(2β + α) should be maximum and the maximum value of sin(θ) is 1.Therefore,

Q.4. A particle falling vertically from a height hits a plane surface inclined to horizontal at an angle θ with speed v0 and rebounds elastically (Fig.). Find the distance along the plane where if will hit second time. 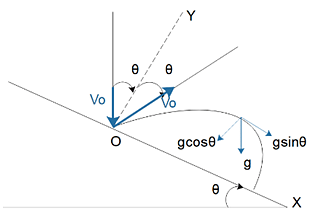 There is no displacement in the y direction.By 2nd kinematic equation in y-direction,

Substituting the value of t in the above equation.

Q.5. A girl riding a bicycle with a speed of 5 m/s towards north direction, observes rain falling vertically down. If she increases her speed to 10 m/s, rain appears to meet her at 45° to the vertical. What is the speed of the rain? In what direction does rain fall as observed by a ground based observer?(Hint: Assume north to be

direction and vertically downward to be

direction and vertically down ward to be

Case I: According to the problem, velocity of girl 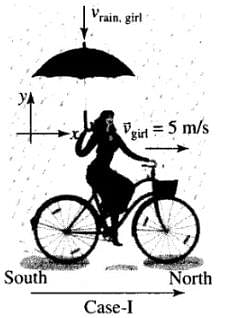 According to question, rain appears to fall vertically downward.Hence, a - 5 = 0 ⇒ a = 5Case II: Now velocity of the girl after increasing her speed.

According to question rain appears to fall at  45 ° to the vertical, hence tan 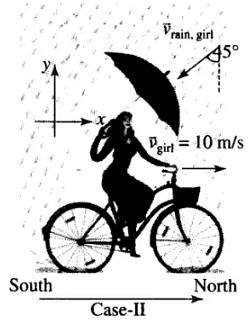 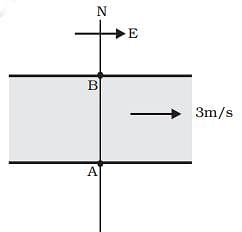 (a) If swimmer starts swimming due north, what will be his resultant velocity (magnitude and direction)?(b) If he wants to start from point A on south bank and reach opposite point B on north bank,(i) Which direction should he swim?(ii) What will be his resultant speed?(c) From two different cases as mentioned in (a) and (b) above, in which case will he reach opposite bank in shorter timeAns. vs = 4m/s along AB(due North)VR = 3m / s towards East(a) Insert Image-10vs = 4m / s due NorthvR = 4m / s due EastAs both are perpendicular. 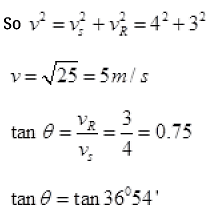 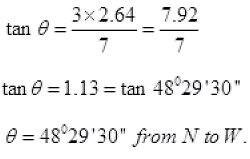 (c) Time taken by swimmer when he strike at the north direction, the component of velocity perpendicular to the river is 4 m/s.Let width of river = dRTime taken when he strike towards North 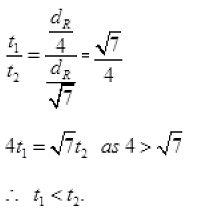 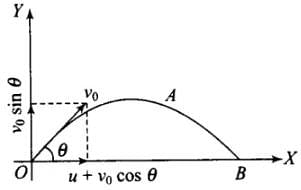 (a) The effective angle to the horizontal at which the ball is projected in air as seen by a spectator can be found as,

(b) Let t be the time of flight.The displacement in y direction is 0.

Q.8. Motion in two dimensions, in a plane can be studied by expressing position, velocity and acceleration as vectors in Cartesian co-ordinates

are unit vector along x and y directions, respectively and Ax and Ay are corresponding components of  (Fig.). Motion can also be studied by expressing vectors in circular polar co-ordinates as

are unit vectors along direction in which ‘r’ and ‘θ’ are increasing. 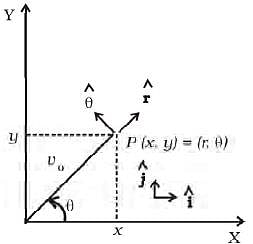 (b) Show that both

are unit vectors and are perpendicular to each other.

(d) For a particle moving along a spiral given by

where a = 1 (unit), find dimensions of ‘a’. (e) Find velocity and acceleration in polar vector represention for particle moving along spiral described in (d) above.Ans.(a) We know,

Adding the above two equations,

(b) In order to show that

are perpendicular, lets show that their dot product is zero.

Differentiating on both sides,

Writing dimensions on both sides,

Differentiating on both sides to find velocity,

Differentiating on both sides to find acceleration,

Q.9. A man wants to reach from At to the opposite corner of the square C (Fig.). The sides of the square are 100 m. A central square of 50m x 50m is filled with sand. Outside this square, he can walk at a speed 1 m/s. In the central square, he can walk only at a speed of v m/s (v < 1). What is smallest value of v for which he can reach faster via a straight path through the sand than any path in the square outside the sand? 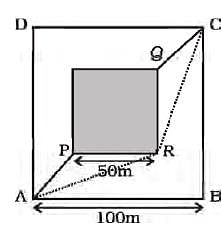 Ans. As shown in the adjacent diagram.The man walks through the sand on the path APQC via straight line, so, time taken by him to go from A to C is 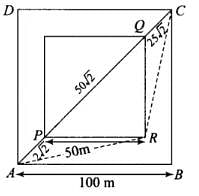 Clearly from figure the shortest path outside the sand will be ARC. Time taken to go from A to C via this path is 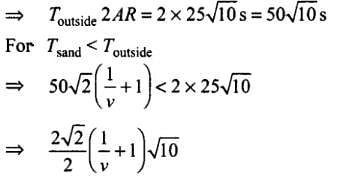 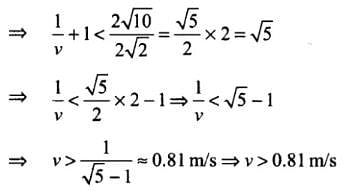