The document NCERT Exemplar: Motion in a Straight Line - 2 Notes | Study Physics For JEE - JEE is a part of the JEE Course Physics For JEE.
All you need of JEE at this link: JEE

Q.1. A ball is dropped and its displacement vs time graph is as shown Fig. (displacement x is from ground and all quantities are +ve upwards).

(a) Plot qualitatively velocity vs time graph.(b) Plot qualitatively acceleration vs time graph.Ans. Key concept: To calculate velocity we will find slope which is calculated by dx/dt for displacement-time curve and to find acceleration we will find slope dv/dt of velocity-time curve.Sign convention: We are taking downward as negative and upward as positive.Ball is bouncing on the ground and it is clear from the graph that displacement x is positive throughout. Ball is dropped from a height and its velocity increases in downward direction due to gravity pull. In this condition v is negative but acceleration of the ball is equal to acceleration due to gravity i.e., a = -g. When ball rebounds in upward direction its velocity is positive but acceleration is a = -g.(a) The velocity-time graph of the ball is shown in fig. (i). 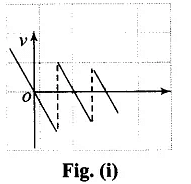 (b) The acceleration-time graph of the ball is shown in fig. (ii).

Q.2. A particle executes the motion described by x(t) = x0(1 - e-γt); t ≥ 0, x0 > 0.(a) Where does the particle start and with what velocity?(b) Find maximum and minimum values of x (t), v (t), a (t). Show that x (t) and a (t) increase with time and v (t) decreases with time.Ans. Initially, we have to calculate velocity and acceleration and then we can determine the maximum or minimum value accordingly.We have displacement as a function of time,x(t) = x0(1 - e-γt)By differentiating this equation w.r.t. time we get velocity of the particle as a function of time.

If we again differentiate this equation w.r.t. time we will get acceleration of the particle as a function of time.

Q.3. A bird is tossing (flying to and fro) between two cars moving towards each other on a straight road. One car has a speed of 18 m/h while the other has the speed of 27km/h. The bird starts moving from first car towards the other and is moving with the speed of 36km/h and when the two cars were separted by 36 km. What is the total distance covered by the bird? What is the total displacement of the bird?Ans. Concept of relative velocity (for 1-D): If two objects are moving along the same straight line and we are observing the motion from the frame of one object. Then for the relative velocity, it will be subtracted for velocities in same direction and added for velocities in opposite directions. (Remember: add or subtract them with proper sign conventions).In this problem we have to use the concept of relative velocity.

Q.4. A man runs across the roof-top of a tall building and jumps horizontally with the hope of landing on the roof of the next building which is of a lower height than the first. If his speed is 9 m/s, the (horizontal) distance between the two buildings is 10 m and the height difference is 9 m, will he be able to land on the next building ? (take g = 10 m/s2)Ans. Key concept: Horizontal Projectile:When a body is projected horizontally from a certain height ‘y’ vertically above the ground with initial velocity u. If friction is considered to be absent, then there is no other horizontal force which can affect the horizontal motion. The horizontal velocity therefore remains constant and so the object covers equal distance in horizontal direction in equal intervals of time.Time of flight: If a body is projected horizontally from a height h with velocity u and time taken by the body to reach the ground is T, then

Horizontal range: Let R be the horizontal distance travelled by the body 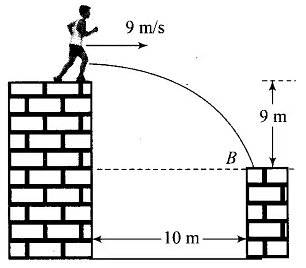 Horizontal distance travelled by the man is greater than 10 m, therefore, he will land on the next building.Q.5. A ball is dropped from a building of height 45 m. Simultaneously another ball is thrown up with a speed 40 m/s. Calculate the relative speed of the balls as a function of time.Ans. In motion under gravity, if the ball is released or dropped that means its initial velocity is zero. In this problem as ball is dropped, so its initial velocity will be taken as zero. We will apply kinematic equations.According to the problem, for the ball dropped from the building, u1 = 0, u2 = 40 m/sVelocity of the ball after time t,v1 = u1 - gtv1 = -gt 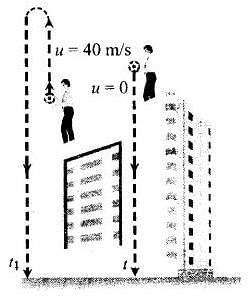 Q.6. The velocity-displacement graph of a particle is shown in Fig. 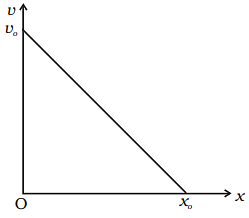 (a) Write the relation between v and x.(b) Obtain the relation between acceleration and displacement and plot it.Ans. In this problem, we will use equation of straight line graph (linear equation), y = mx + c.In this equation, m is the slope of the graph and c is the interception on y-axis.

Now according to the problem, initial velocity = v0Let the distance travelled in time t = x0.

....(i)where, v is velocity and x is displacement at any instant of time t. 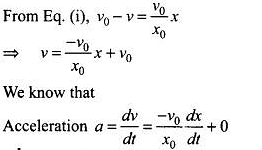 Graph of a versus x is given below.

Q.1. It is a common observation that rain clouds can be at about a kilometre altitude above the ground.(a) If a rain drop falls from such a height freely under gravity, what will be its speed? Also calculate in km/h. (g = 10m/s2)(b) A typical rain drop is about 4mm diameter. Momentum is mass x speed in magnitude. Estimate its momentum when it hits ground.(c) Estimate the time required to flatten the drop.(d) Rate of change of momentum is force. Estimate how much force such a drop would exert on you.(e) Estimate the order of magnitude force on umbrella. Typical lateral separation between two rain drops is 5 cm.(Assume that umbrella is circular and has a diameter of 1m and cloth is not pierced through !!)Ans. Key concept: This problem can be solved by kinematic equations of motion and Newton’s second law that Fext = dp/dt will be used, where dp is change in momentum over time dt.(a) According to the problem (h) = 1 km = 1000 m and we know that the initial velocity of the ball is zero. And displacement covered by rain drop in downward direction, so we will taking h as negative. (We are neglecting the air resistance.) 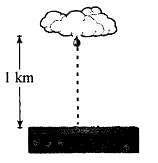 (d) Force exerted by a rain drop is

Q.2. A motor car moving at a speed of 72km/h can not come to a stop in less than 3.0 s while for a truck this time interval is 5.0 s. On a highway the car is behind the truck both moving at 72km/h. The truck gives a signal that it is going to stop at emergency. At what distance the car should be from the truck so that it does not bump onto (collide with) the truck. Human response time is 0.5s.Ans. According to the problem, speed of car as well as truck = 72 km/h

Time required to stop the truck = 5 sFinally the truck comes to rest, so Final velocity of truck will be zero.Retardation produced by truck:

or at = -4 m/s2Time required to stop the car = 3 sFinally the car comes to rest just behind the truck in the same time to avoid collision, so final velocity of car will also be zero.Retardation produced by car is

Let car be at a distance s from the truck, when truck gives the signal and t be the time taken to cover this distance.As human response time is 0.5 s, in this time car will cover some distance with uniform velocity. Therefore, time of retarded motion of car is (t - 0.5) s. Velocity of car after time t,

Velocity of truck after time r,vt = 20 - 4tTo avoid the car bump onto the truck

Distance travelled by the truck in time t,

where, s is displacement∴ Distance travelled in time interval 0 to 3 s,

(c) In a periodic motion when Velocity is zero acceleration will be maximum putting v = 0 in Eq. (i). 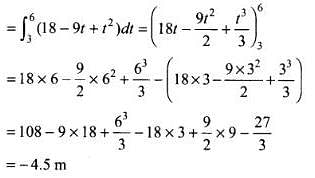 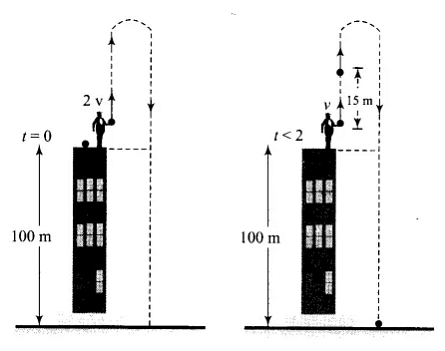 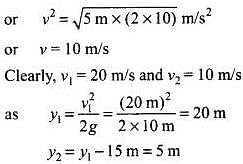 If t2 is the time taken by the ball 2 to cover a displacement of 5 m, then from

Important note: We should be very careful when we are applying the equation of rectilinear motion. These equations are applicable only in case of constant acceleration.

Some important observations for motion under gravity:

Let u be the initial velocity of body, then time of ascent

The document NCERT Exemplar: Motion in a Straight Line - 2 Notes | Study Physics For JEE - JEE is a part of the JEE Course Physics For JEE.
All you need of JEE at this link: JEE