Q4. If the displacement of an object is proportional to square of time, then the object moves with 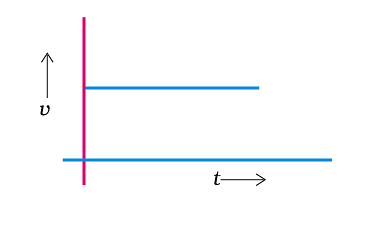 Ans: (a) in uniform motionExplanation: From the above-given graph, it is clear that the velocity of the object remains constant throughout, hence the object is in uniform motion.Q6. Suppose a boy is enjoying a ride on a merry-go-round which is moving with a constant speed of 10 m/s. It implies that the boy is:(a) at rest(b) moving with no acceleration(c) in accelerated motion(d) moving with uniform velocityAns: (c) in accelerated motionExplanation: The boy is moving in a circular motion and circular motion is an accelerated motion hence (c) is the right answer.Q7. Area under a v – t graph represents a physical quantity which has the unit:(a) m2(b) m(c) m3(d) ms–1Ans: (b) mExplanation: The area given in the graph represents Displacement and its unit is meter. Hence the answer is (b) mQ8. Four cars A, B, C and D are moving on a levelled road. Their distance versus time graphs are shown in Fig. 8.2. Choose the correct statement:(a) Car A is faster than car D.(b) Car B is the slowest.(c) Car D is faster than car C.(d) Car C is the slowest. 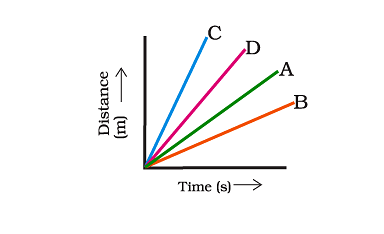 Ans: (b) Car B is the slowest.Explanation: The graph shows that Car B covers less distance in a given time than A, C and D cars hence it is the slowest.Q9. Which of the following figures represents uniform motion of a moving object correctly? 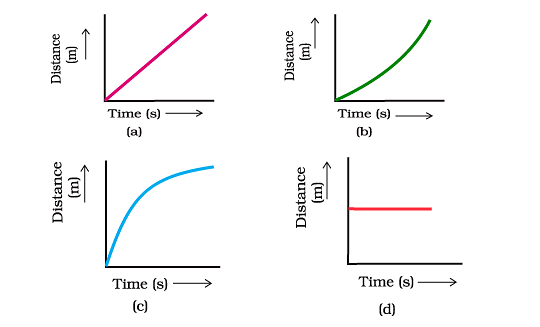 Explanation: Distance in graph a) is uniformly increasing with time hence it represents uniform motion.Q10. Slope of a velocity-time graph gives:(a) the distance(b) the displacement(c) the acceleration(d) the speedAns: (c) the accelerationQ11. In which of the following cases of motions, the distance moved and the magnitude of displacement are equal?(a) If the car is moving on a straight road(b) If the car is moving in a circular path(c) The pendulum is moving to and fro(d) The earth is revolving around the SunAns: (a) If the car is moving on a straight roadExplanation: In other cases given here displace can be less than distance hence option (a) is the right answer.

Q12. The displacement of a moving object in a given interval of time is zero. Would the distance travelled by the object also be zero? Justify your answer.Ans: No, the object might have travelled some distance, provided the initial position and final position of the body coincide. 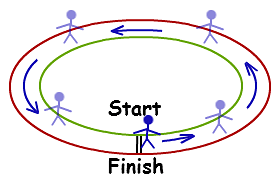 Q13. How will the equations of motion for an object moving with a uniform velocity change?Ans: When an object travels with uniform velocity then v = u and a = 0.∴ v = u + at ⇒ v = us = ut + (1/2) at2 = utv2 = u2 +  2as ⇒ v2 = u2Q14. A girl walks along a straight path to drop a letter in the letterbox and comes back to her initial position. Her displacement-time graph is shown in the figure. Plot a velocity-time graph for the same. 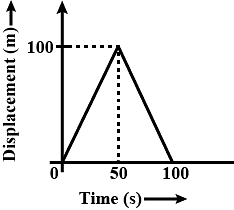 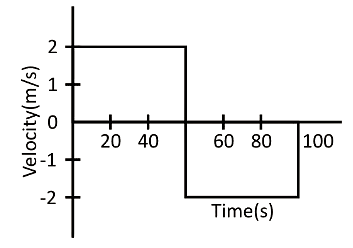 Q15. A car starts from rest and moves along the x-axis with constant acceleration of 5 ms-2 for 8 seconds. It then continues with constant velocity. What distance will the car cover in 12 seconds since it started from rest?Ans:

Q17. The velocity-time graph (Fig. 8.5) shows the motion of a cyclist. Find (i) its acceleration (ii) its velocity and (iii) the distance covered by the cyclist in 15 seconds. 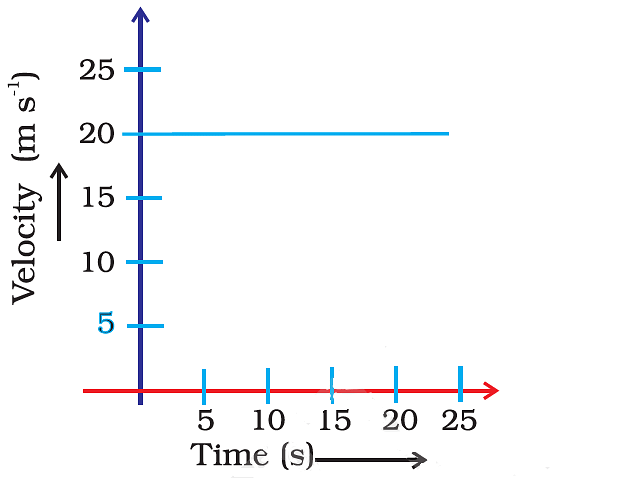 Q18. Draw a velocity versus time graph of a stone thrown vertically upwards and then coming downwards after attaining the maximum height.Ans: 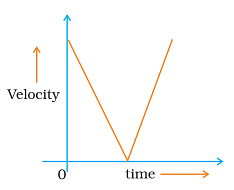 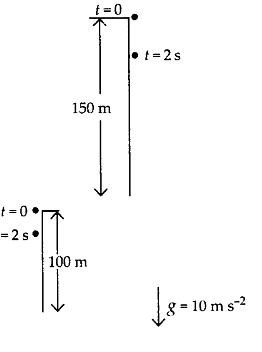 Use this graph to find average velocity for the first 4 s, for the next 4 s and for the last 6 s.Ans: 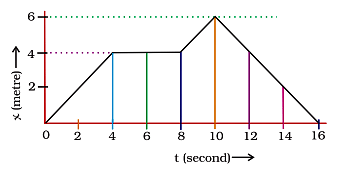 The document NCERT Exemplar: Motion Notes | Study Science Class 9 - Class 9 is a part of the Class 9 Course Science Class 9.
All you need of Class 9 at this link: Class 9
Join Course