The document NCERT Exemplar: Principles of Inheritance & Variation - 1 Notes | Study Biology Class 12 - NEET is a part of the NEET Course Biology Class 12.
All you need of NEET at this link: NEET 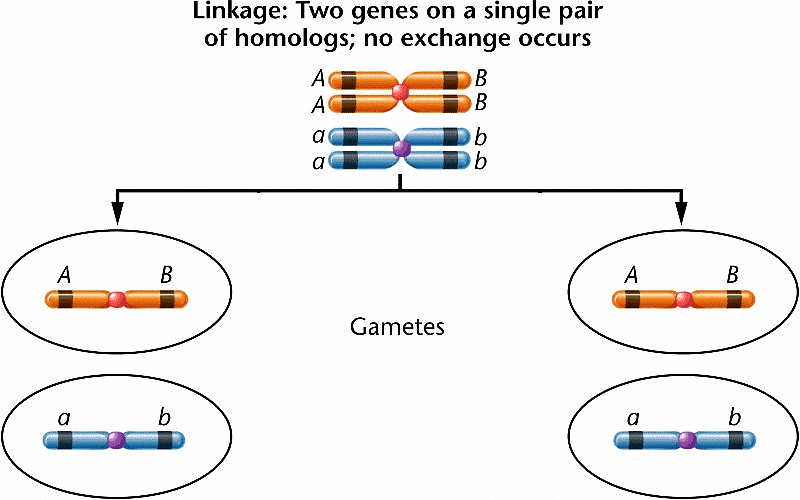 Q2. Conditions of a karyotype 2n + 1, 2n –1 and  2n + 2, 2n – 2 are called:(a) Aneuploidy(b) Polyploidy(c) Allopolyploidy (d) MonosomyAns: (a)Solution:Failure of segregation of chromatids during the cell division cycle results in the gain or loss of a chromosome(s), called aneuploidy. Aneuploidy arises due to the non-disjunction of the homologous chromosome.Aneuploidy is of four types:

Q5. In sickle cell anaemia glutamic acid is replaced by valine. Which one of the following triplets codes for valine?(a) G G G(b) A A G(c) G A A(d) G U GAns: (d)Solution:The substitution of amino acid in the globin protein results due to the single base substitution at the sixth codon of the beta-globin gene from GAG (Glutamic acid) to GUG (Valine).Q6. Person having genotype IA IB would show the blood group as AB. This is because of: (a) Pleiotropy(b) Co-dominance(c) Segregation(d) Incomplete dominanceAns: (b)Solution:

Q8. A cross between two tall plants resulted in offspring having few dwarf plants. What would be the genotypes of both the parents?(a) TT and Tt(b) Tt and Tt(c) TT and TT(d) Tt and ttAns: (b)Solution: 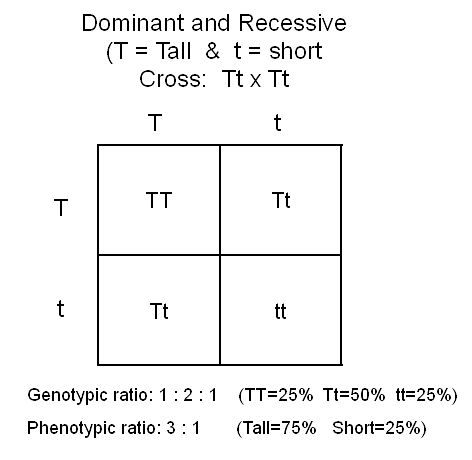 Q9. In a dihybrid cross, if you get 9:3:3:1 ratio it denotes that:(a) The alleles of two genes are interacting with each other(b) It is a multigenic inheritance(c) It is a case of multiple allelism(d) The alleles of two genes are segregating independentlyAns: (d)Solution:Based upon such observations on dihybrid crosses (crosses between plants differing in two traits) Mendel proposed a second set of generalisations that we call Mendel’s Law of Independent Assortment. The law states that “When two pairs of traits are combined in a hybrid, segregation of one pair of characters is independent of the other pair of characters”.Q10. Which of the following will not result in variations among siblings?(a) Independent assortment of genes(b) Crossing over(c) Linkage(d) MutationAns: (a)Solution:

(c) Both mother and father are heterozygous for ‘A’ and ‘B’ blood group, respectively

(d) Both mother and father are homozygous for ‘A’ and ‘B’ blood group, respectively

Genotype of mother: IA i

Genotype of father: IB i

Both mother and father are heterozygous for ‘A’ and ‘B’ blood group, respectively.

Q1. What is the cross between the progeny of F1 and the homozygous recessive parent called? How is it useful?Ans: When a progeny of F1  is crossed with the homozygous recessive parent, it is called test cross. Such a cross is useful to determine the genotype of an unknown, i.e., whether it is heterozygous, or homozygous dominant for the trait.Q2. Do you think Mendel’s laws of inheritance would have been different if the characters that he chose were located on the same chromosome?Ans:  If Mendel chose characters that were located on the same chromosome then Mendel would not find the law of independent assortment.Q3. Enlist the steps of controlled cross-pollination. Would emasculation be needed in a cucurbit plant? Give reasons for your answer.Ans: Steps of controlled cross-pollination:Selection of parents → Emasculation → Bagging → Collection of pollen from male parent → Dusting the pollen on stigma → Re-baggingEmasculation could not be needed in a cucurbit plant because it has unisexual flowers.Q4. A person has to perform crosses for the purpose of studying the inheritance of a few traits/characters. What should be the criteria for selecting the organisms?Ans: Criteria for selecting the organism are:

Q5. The pedigree chart given below shows a particular trait which is absent in parents but present in the next generation irrespective of sexes. Draw your conclusion on the basis of the pedigree.

Ans: The trait is autosome linked and recessive in nature. Both the parents are carriers (i.e., heterozygous) hence among offspring few show the trait irrespective of sex. The other offsprings are either normal or carrier.

Q6. In order to obtain the F1 generation, Mendel pollinated a pure-breeding tall plant with a pure breeding dwarf plant. But forgetting the F2 generation, he simply self-pollinated the tall F1 plants. Why?Ans: Genotype of 50% of the offspring would resemble one parent and the rest the other parent. All the F1, offsprings of the cross are heterozygous so allowing self-pollination is sufficient to raise F2  offspring. Also, Mendel intended to understand the inheritance of the selected trait over generations.Q7. “Genes contain the information that is required to express a particular trait.” Explain.Ans. The genes present in an organism show a particular trait by way of forming a certain product. This is facilitated by the process of transcription and translation (according to the central dogma of genetics).

Q8. How are alleles of a particular gene differ from each other? Explain its significance.Ans: Alleles of a particular gene differ from each other on the basis of certain changes (i.e., mutations) in the genetic material (segment of DNA or RNA). Different alleles of a gene increase the variability or variation among the organisms.Q9. In a monohybrid cross of plants with red and white-flowered plants, Mendel got only red-flowered plants. On self-pollinating these F1 plants got both red and white-flowered plants in  3:1 ratio. Explain the basis of using RR and rr symbols to represent the genotype of plants of the parental generation.Ans: On crossing red and white flower only red colour flower appeared in the F1  generation. But the white colour flower again appears in the F2  generation which is raised out of the F1  individuals only. Mendel reasoned that there is a factor of each and every character. Accordingly, there has to be one factor (R) for red flower and other one factor (r) for white flower. In case, an organism possesses only one copy of the gene then the possibility of reappearance of white flower in the F2  generation of the given cross is not there. Also, the ratio (3 : 1 of red and white) indicates that each organism must possess two copies of a particular gene.

Q10. For the expression of traits, genes provide only the potentiality and the environment provides the opportunity. Comment on the veracity of the statement.Ans: The phenotype of individuals is a result of the combined effect of environment and genotype.

Q11. A, B, D are three independently assorting genes with their recessive alleles a, b, d, respectively. A cross was made between individuals of Aa bb DD genotype with aa bb dd. Find out the type of genotypes of the offspring produced.Ans: The given cross is Aa bb dd X aa bb dd. Accordingly, the type of offspring produced would:

Q12. In our society, a woman is often blamed for not bearing a male child. Do you think it is right? Justify.Ans: 50 per cent of sperm carry the X chromosome while the other 50 percent carry the Y. After fusion of the male and female gametes the zygote would carry either XX or YY depending on whether the sperm carrying X or Y fertilised the ovum. The sex of the baby is determined by the father and not by the mother.It is unfortunate that in our society women are blamed for producing female children and have been ostracised and ill-treated because of this false notion.Q13. Discuss the genetic basis of wrinkled phenotype of pea seed.Ans: Wrinkled phenotype of pea seed is due to the small grain size produced by double recessive allele (bb). Q14. Even if a character shows multiple allelism, an individual will only have two alleles for that character. Why?Ans: A diploid organism has only two alleles of a character, although it has more than two alleles. Multiple alleles can be found only when population studies are made.Q15. How does a mutagen induce mutation? Explain with example.Ans: A mutagen is a physical or chemical agent that changes the genetic material, usually DNA. Different mutagens act on the DNA differently. Powerful mutagens may result in chromosomal instability, causing chromosomal breakages and rearrangement of the chromosomes such as translocation, deletion, and inversion.Ionizing radiations such as X-rays, gamma rays and alpha particles may cause DNA breakage and other damages. Ultraviolet radiations with wavelength above 260 nm are absorbed strongly by bases, producing pyrimidine dimers. Radioactive decay, such as 14C in DNA which decays into nitrogen.

The document NCERT Exemplar: Principles of Inheritance & Variation - 1 Notes | Study Biology Class 12 - NEET is a part of the NEET Course Biology Class 12.
All you need of NEET at this link: NEET