Q.2. A short pulse of white light is incident from air to a glass slab at normal incidence. After travelling through the slab, the first colour to emerge is(a) Blue.(b) Green.(c) Violet.(d) Red.

Correct Answer is Option (d)As velocity of wave is given by the relation v = f λ. When light ray goes from one medium to other medium, the frequency of light remains unchanged. Hence v ∝ λ or greater the wavelength, greater the speed.The light of red colour is of highest wavelength and therefore of highest speed. Therefore, after travelling through the slab, the red colour emerges first.

Correct Answer is Option (b)As aeroplane is at higher altitude, the passenger in an aeroplane may see a primary and a secondary rainbow like concentric circles.• If an object move with constant speed (V0) towards a convex lens from infinity to focus, the image will move slower in the beginning and then faster. AlsoVi = (f / f + u)2 . V0If an object approaches the lens, the image moves away from lens with  a non-uniform acceleration.

Q.5. You are given four sources of light each one providing a light of a single colour – red, blue, green and yellow. Suppose the angle of refraction for a beam of  yellow light corresponding to a particular angle of incidence at the interface of two media is 90°. Which of the following statements is correct if the source of yellow light is replaced with that of other lights without changing the angle of incidence?(a) The beam of red light would undergo total internal reflection.(b) The beam of red light would bend towards normal while it gets refracted through the second medium.(c) The beam of blue light would undergo total internal reflection.(d) The beam of green light would bend away from the normal as it gets refracted through the second medium.

Correct Answer is Option (c)We know that if angle of refraction is 90° for the length then incidence angle is called critical angle. So light rays are passing from denser to rarer medium.As sin c = 1 /  μ so, c ∝ 1 / μ > μv > μg > μy > μR 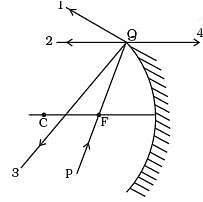 Q.9. The optical density of turpentine is higher than that of water while its mass density is lower. Fig. shows a layer of turpentine floating over water in a container. For which one of the four rays incident on turpentine in Fig, the path shown is correct?

Correct Answer is Option (b)μa < μT > μw. Here, incidence ray passes from air to turpentine to water, i.e., from rare to denser then denser to rarer so first it bends towards normal then away from normal so the path shown is correct for ray (2).

Correct Answer is Option (d)• Object placed in front of mirror: For all position of object in front of a mirror, image is virtual, erect and smaller in size. 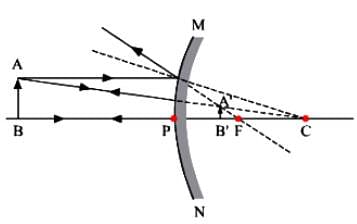 Q.11. There are certain material developed in laboratories which have a negative refractive index (Fig.). A ray incident from air (medium 1) into such a medium (medium 2) shall follow a path given by(a)

Correct Answer is Option (a)The materials with negative refractive index responds to Snell’s law just opposite way. If incident ray from air (Medium 1) incident on those material, the ray refract or bend same side of the normal as in option (a).

Q.12. Consider an extended object immersed in water contained in a plane trough. When seen from close to the edge of the trough the object looks distorted because(a) The apparent depth of the points close to the edge are nearer the surface of the water compared to the points away from the edge.(b) The angle subtended by the image of the object at the eye is smaller than the actual angle subtended by the object in air.(c) Some of the points of the object far away from the edge may not be visible because of total internal reflection.(d) Water in a trough acts as a lens and magnifies the object.

Q.13. A rectangular block of glass ABCD has a refractive index 1.6. A pin is placed midway on the face AB (Fig.). When observed from the face AD, the pin shall

A point P is on the mid point of face AB. When seen through face AD, near to point A, the angle of incidence (i1) will be smaller than critical angle ic = 38.7o So image of P will at P’ and image can be seen at P’. P’ is nearer to both A and D as compared to P verifies option (a) and (b). When seen near point D through face AD, angle of incidence i2 > ic. so total internal reflection takes place and object cannot be observed. But object can be seen when viewed near to A so option (d) not verified.

Q.15. A magnifying glass is used, as the object to be viewed can be brought closer to the eye than the normal near point. This results in(a) A larger angle to be subtended by the object at the eye and hence viewed in greater detail.(b) The formation of a virtual erect image.(c) Increase in the field of view.(d) Infinite magnification at the near point.

Correct Answer is Option (a) & (b)In the magnifying glass, the object is placed within the focal length and the image formed is magnified and erect. As (A’B’) image is magnified so it subtends larger angle at the eye than the object (AB), so can be seen more clearly.

Q.17. Will the focal length of a lens for red light be more, same or less than that for blue light?

The refractive index depends on colour of light or wavelength of light.Cauchy's equation: μ = A + B / λ2 + C / λ4 + ...As λred > λblue hence μred < μblueHence parallel beams of light incident on a lens will be bent more towards the axis for blue light compared to red.By lens marker's formula,1 / f = (μ - 1)(1 / R1 - 1 / R2)The refractive index for red light is less than that for blue light μred < μblueHence 1 / fred < 1 / fblue ⇒ fred > fblue Thus, the focal length for red light will be greater than that for blue light.

Q.18. The near vision of an average person is 25cm. To view an object with an angular magnification of 10, what should be the power of the microscope?

Q.19. An unsymmetrical double convex thin lens forms the image of a point object on its axis. Will the position of the image change if the lens is reversed?

Q.20. Three immiscible liquids of densities d1 > d2 > d3 and refractive indices µ1 > µ2 > µ3 are put in a beaker. The height of each liquid column is h/3. A dot is made at the bottom of the beaker. For near normal vision, find the apparent depth of the dot.

The liquids are immiscible, so liquids arranged from bottom to top d1, d2 and d3 with their refractive indices μ1, μ2, μ3 respectively separated by layers l1, l2 as shown in  figure. 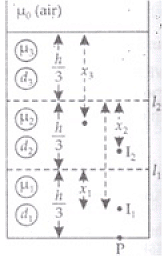 The required relation for minimum angle of deviation

Q.22. A short object of length L is placed along the principal axis of a concave mirror away from focus. The object distance is u. If the mirror has a focal length f, what will be the length of the image? You may take L <<|v - f|.

It is required expression.

Q.25. In many experimental set-ups the source and screen are fixed at a distance say D and the lens is movable. Show that there are two positions for the lens for which an image is formed on the screen.Find the distance between these points and the ratio of the image sizes for these two points.

This is also one of the methods for finding focal length of the length in laboratory and knows as “Displacement method”.1 / f = 1 / v - 1 / uConsider a convex lens L placed between an object O and a screen S. The distance between the object and the screen is D and the positions of the object and the screen are held fixed. The lens can be moved along the axis of the system and at a position I a sharp image will be formed on the screen. Interestingly, there is another position on the same axis where a sharp image will once again be obtained on the screen. The position is marked as II in Figure. 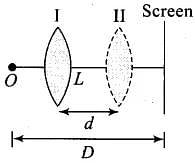 Q.26. A jar of height h is filled with a transparent liquid of refractive index µ (Fig.). At the centre of the jar on the bottom surface is a dot. Find the minimum diameter of a disc, such that when placed on the top surface symmetrically about the centre, the dot is invisible. 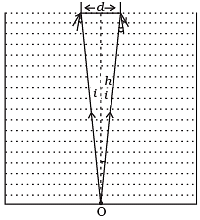 The point O will be invisible if the light ray coming from O does not come out or it get graze the surface of liquid or gets total internal reflection as in figure here. 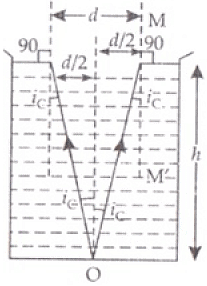 Ray OA is incident at A with critical angle iC and it’s angle of refraction will be 90°.For other ray if incident angle is more than ic it will get total internal reflection from the surface so will not come out from liquid.So disc of diameter d is required to stop the rays from ‘O’ out of liquid. 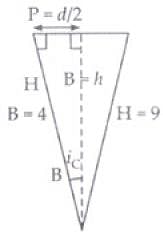 Now for eye + lens system, we have the sum of the eye and that of the glasses Pg

Q.28. Show that for material with refractive index µ ≥ √2 , light incident at any angle shall be guided along a length perpendicular to the incident face.

Let the ray incident on face AB at angle i, after refraction, it travels along PQ and then interact with face AC which is perpendicular to the incident face. 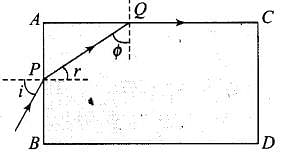 Let us consider a portion of a ray between x and x + dx inside the liquid solution. Let the angle of incidence of ray at x be θ and let the ray enters the thin column at height y. Because of the refraction it deviates from the original path and emerges at x + dx with an angle θ + dθ and at a height y + dy. 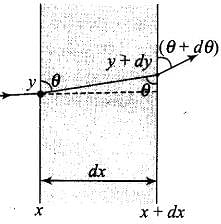 Q.30. If light passes near a massive object, the gravitational interaction causes a bending of the ray. This can be thought of as happening due to a change in the effective refractive index of the medium given byn(r) = 1 + 2 GM/rc2where r is the distance of the point of consideration from the centre of the mass of the massive body, G is the universal gravitational constant, M the mass of the body and c the speed of light in vacuum. Considering a spherical object find the deviation of the ray from the original path as it grazes the object.

This is the required proof.

Here the material has refractive index -1, θr is negative and θ'r positive.Now, 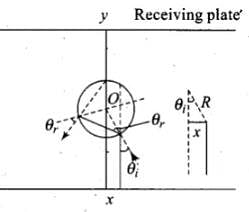 Thus, for light emitted from the source shall not reach the receiving plate.If

Q.32. (i) Consider a thin lens placed between a source (S) and an observer (O) (Fig.). Let the thickness of the lens vary as w(b) = ω0 - (b2/α), where b is the verticle distance from the pole. ω0 is a constant. Using Fermat’s principle i.e. the time of transit for a ray between the source and observer is an extremum, find the condition that all paraxial rays starting  from the source will converge at a point O on the axis. Find the focal length.

Thus, all rays passing at a height b shall contribute to the image. The ray paths make an angle.

This is the required expression.