The document NCERT Exemplar Solutions: Fibre to Fabric Notes | Study Science Class 7 - Class 7 is a part of the Class 7 Course Science Class 7.
All you need of Class 7 at this link: Class 7

Q.2. Which of the following is not a type of silk?(a) Mulberry silk(b) Tassar silk(c) Mooga silk(d) Moth silkAns: dExplanation:Mulberry silk, Tasar Silk and Mooga silk are the varieties of silk produced by different silkworms whereas Moth silk is not a variety of silk.

Q.5. A wool fibre cannot be obtained from which of the following?(a) Goat(b) Llama(c) Alpaca(d) MothAns: dExplanation:Wool can be obtained from animals like sheep, goat, camel, yak, rabbit, etc. A moth is a type of insect.

Q.8. The term sericulture is used for(a) culture of bacteria.(b) rearing of the silkworm.(c) making silk fabric from silk yarn.(d) production of sarees.Ans: bExplanation:Breeding and management of silkworms for obtaining silk are called sericulture.

Explanation:A salivary gland of silkworm releases a protein which is used as silk.

Q.2. State whether the following statements are True or False. If false, correct them.(a) Silkworms are caterpillars of the silk moth.(b) In India, camels and goats are generally reared for obtaining wool.(c) The rearing of silkworms for obtaining silk is called silviculture.(d) In the process of obtaining wool from fleece, sorting is done after scouring.(e) Yak hair is not used to make woollen fabric.

Q.3. How does the hair of certain animals help in keeping their bodies warm?Ans: Hair are bad conductors of heat, hence they will not allow the escape of heat from the body, which ensures their bodies are kept warm. 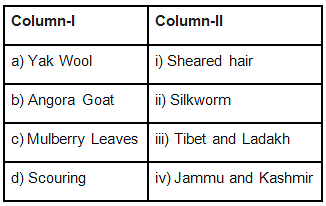 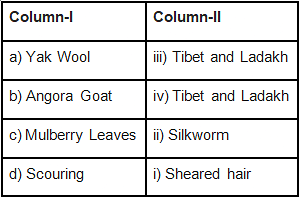 Q.3.Figure shows three rings of circles with letters in them. Some of these letters in each ring can form the name of one wool yielding animal. Find the names of these animals. 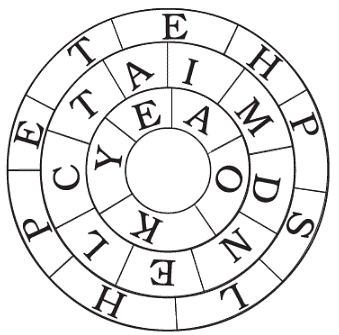 18. Write a caption for each of the figures given as Figure (a–d). 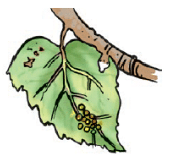 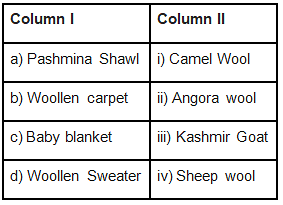 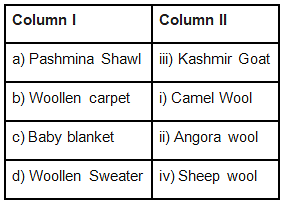 Ans:The a) female silk moth lays b) eggs, from which hatch c) larvae called d) caterpillars or e) silkworms. They grow in size and when the caterpillar is ready to enter the next stage of its life history called f) pupa, it first weaves a covering to hold itself, which is known as g) cocoon.

Q.2. Paheli went to the market to buy sarees for her mother. She took out a thread from the edge of the two sarees shown by the shopkeeper and burnt them. One thread burnt with a smell of burning hair and the other burnt with the smell of burning paper. Which thread is from a pure cotton saree and which one from a pure silk saree? Give a reason for your answer.

Ans: A thread which burns with the smell of burning paper is of cotton because both paper and cotton are cellulose which is carbohydrate and hence they burn with similar odour. Similarly, the thread which is burnt with the smell of burning hair is silk because silk, as well as hair, are proteins hence they burn with a similar characteristic smell.

Q.3. Explain the phrase – “Unity is Strength” on the basis of the making of fabric from the fibre.

Ans: Fabric is made of a thin hair-like strand called fibres. It is easy to break a fibre thread as it is fragile and easy to break as well. On the other hand, fabric is the accumulation of many fibre threads which are hard to break and needs an enormous amount of energy to break the fabric. Hence, based on making of fabric from fibre it is said that unity is strength.

Q.4. Write various steps for processing fibres into wool.Ans:Step I: The fleece of the sheep along with a thin layer of skin is removed from its body [Figure (a)]. This process is called shearing. Machines similar to those used by barbers are used to shave off hair. Usually, hair is removed during the hot weather. This enables sheep to survive without their protective coat of hair. The hair provides woollen fibres. Woollen fibres are then processed to obtain woollen yarn. Shearing does not hurt the sheep just as it does not hurt when you get a hair cut or your father shaves his beard. Do you know why? The uppermost layer of the skin is dead. Also, the hair of sheep grows again just as your hair does.

Step II: The sheared skin with hair is thoroughly washed in tanks to remove grease, dust and dirt. This is called scouring. Nowadays scouring is done by machines [Fig. (b) and (c)].

Step III: After scouring, sorting is done. The hairy skin is sent to a factory where the hair of different textures is separated or sorted.

Step IV: The small fluffy fibres, called burrs, are picked out from the hair. These are the same burrs which sometimes appear on your sweaters. The fibres are scoured again and dried. This is the wool ready to be drawn into fibres.

Step V: The fibres can be dyed in various colours, as the natural fleece of sheep and goats is black, brown or white.

Q.5. Describe the life history of silk moth with the help of figures of various stages. 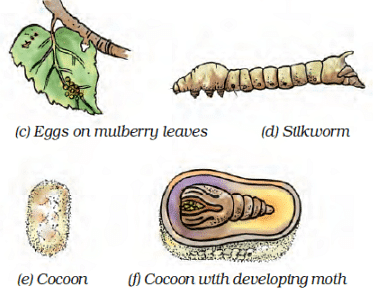 The document NCERT Exemplar Solutions: Fibre to Fabric Notes | Study Science Class 7 - Class 7 is a part of the Class 7 Course Science Class 7.
All you need of Class 7 at this link: Class 7